We gathered in the shade just outside the Tablas Creek tasting room.  You could tell why we were here by our sturdy shoes.  Yes it was almost 100 degrees, but we were wine lovers ready to brave the elements to find out more about this wonderful winery with a vineyard walk and tasting.

Levi Glenn, the Tablas Creek Viticulturist gave us some basics on the winery history before we got started.  The Perrin and Haas families joined to find vineyard land here in California to grow the Rhone varieties that the Perrins’ have long grown at Chateau de Beaucastel in France’s Rhone Valley.  The Tablas Creek property is on the same latitude, the climate and soil are both similar and when they bought this 102 acre property in 1989 they began the process of bringing the traditional Rhone varieties grown on the Perrins’ estate to this country.  The cuttings from France had to go through a three year process to be sure that they were virus free.  In order to have enough vines to actually make wine, they started a nursery, bench-grafting vines to plant on the estate and enough to sell to other vineyards.  While they no longer have the nursery, they partner with NovaVine in Sonoma to create Tablas Creek clones from grafted vines and bud wood.  Many wineries are now raising Tablas Creek clones to create their Rhone style wines.

They grow sustainably, organically and use biodynamic practices.  There is a compost tea that they use to fertilize the vines and they plant sections of the vineyard with insectaries to encourage beneficial insects.

We headed down the drive then past the head-pruned Mourvedre by the gate and continued down to the lambing barn and barnyard.  Levi talked about the animals, they have 2 donkeys and 5 alpacas that guard the herd of 40 sheep. The sheep are primarily used to mow down the cover crops.  Over the season they can cover 30-40 acres of vineyard.  In addition they fertilize as they mow.  Once the vineyards are growing the sheep have to be moved elsewhere and still need to be fed.  Typically they grow legumes as cover crops to add nitrogen back into the soil.  They had some vines that were showing a little too much vigor so instead they planted barley as their cover crop.  This works beautifully as they can then harvest the barley to use as feed for the herd.

While here they poured us a cool and refreshing glass of the 2012 Vermentino, one of only 2 non Rhone varieties grown on the estate.  This was the wine that got me hooked on Tablas Creek when I recieved it as a gift from a friend.  Enjoying this wine as the sun came dappled through the poplars, we took in the animals, the view of the cutting shed and the beautifully ripening Grenache.

Refreshed, it was time to move on up the long hill to the top where Chef Jeff Scott waiting under the oak trees.  The vineyard views are beautiful.  At the top of the hill you have a view of the las tablas creek area including Halter Ranch next door.  Reveling in the shade they poured us glasses of the 2011 Estate Rose, a blend of Mourvedre, Grenache and Counoise. We enjoyed the view and Chef brought out a tray of figs topped with goat cheese to pair.

We headed back down the hill to the  head pruned Roussanne block.  We believe these are the only head-pruned Roussanne vines in the state. The 2009 Roussane is a gorgeous golden color.  Rousanne is often very difficult to grow (NovaVine calls it “the princess”).  This is the backbone to the Esprit du Beaucastel Blanc their flagship white wine adding richness, weight  and honey with a nice salinity on the backend.  Chateau du Beaucastel makes their Roussanne Vielles Vignes which is considered one of the greatest white wines in France. “Roux” is the French word for “russet” which describes the color of the grapes when ripe and gives us the base for the name “Roussanne”.  This is the latest ripening white Rhone varieties that are grown at Tablas Creek.  The vines respond highly to sunlight and bunches that get sun on the western side will ripen faster than those on the eastern side.  This is also a wine that will age well, case in point we were drinking a 2009 and it was rich and stunning.  After Levi gave us the run down on the grape, Chef Jeff pulled out the pairing.  This was a crostini with fresh ricotta and thyme roasted golden beets topped with a piece of candied bacon.  Beets and bacon pair well and both were gorgeous with the wine.

Across from the Roussanne there are scattered fruit trees including some Quince.  Levi supplied me with a quick recipe for quince paste.

As we had walked down I noticed a large rack with netting and asked Levi when they netted before harvest.  He said that they no longer net.  There are so many vineyards locally that the birds no longer descend and feast, but rather just stop in here and there for a snack which is not an issue.  They still have air cannons when needed.

We headed back up the hill to the head trained Tannat.  This is the other non Rhone variety grown on property.  Levi said that it has been called Tablas Creek Zin, as it is so rich, deep and flavorful.  This grape thrives in the Tablas Creek climate and soils.  Levi says that it takes almost no work and produces consistently good fruit.  Tannat is found most notably in the Basque country on the Spanish border.  Growing this at Tablas Creek was actually a little bit of an accident.  The Perrins’ French nurseryman included cuttings when he packed up the Rhone varieties in 1990 even though it was not requested.  His instincts told him that this grape would do well in Paso Robles and I for one would like to thank him!  The berries have very thick skins which add to the tannins in the wine.  It is fermented open top to allow more oxygen to soften the tannins and then is aged in small barrels again to introduce more oxygen.  In 2010 most of the 248 acres of Tannat planted in California came from Tablas Creek cuttings.  This wine is beautifully balanced with acid, fruit and tannin.  Chef Jeff Scott then had to figure out a way to do a cold red wine pairing out in the vineyard!  He succeeded overwhelmingly with this small bite, which still makes my mouth water whenever I think of it (and I think of it often!).  He prepared Rillettes in the style of the south of France. The pork is slow cooked for 6 hours in it’s own fat then sits in olive oil, thyme and garlic to soak up some more goodness.  This is placed on crostini topped with caramelized onions, drizzled with a pommerey mustard aioli and sprinkled with fleur de sel and black pepper. The fat in the rillettes paired with the acid and tannins in the wine were perfect.  We enjoyed the wine, watched the sun set, had some great conversations and suddenly turned around to find that only 1/3 of the group was left!  We headed back down to the winery and tasting room in the slowly dimming light, sated and fulfilled.  There’s really nothing like being part of the Tablas Creek family.  The staff was incredible and the other wine club members we met share our love for great wine and fascinating wine facts.  Levi was extremely patient as we all pummeled him with questions, answering and enlightening us.  All in all it was a glorious evening. 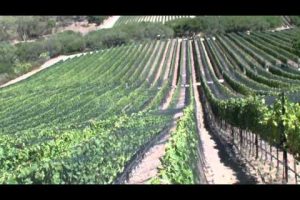 On the western edge of the Sta. Rita Hills AVA[...] 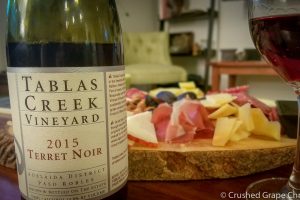 What is Terret Noir? 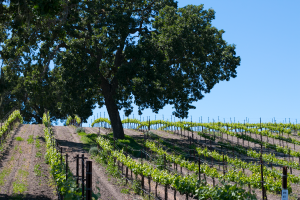 The drive to Purisima Mountain was like taking a step[...]