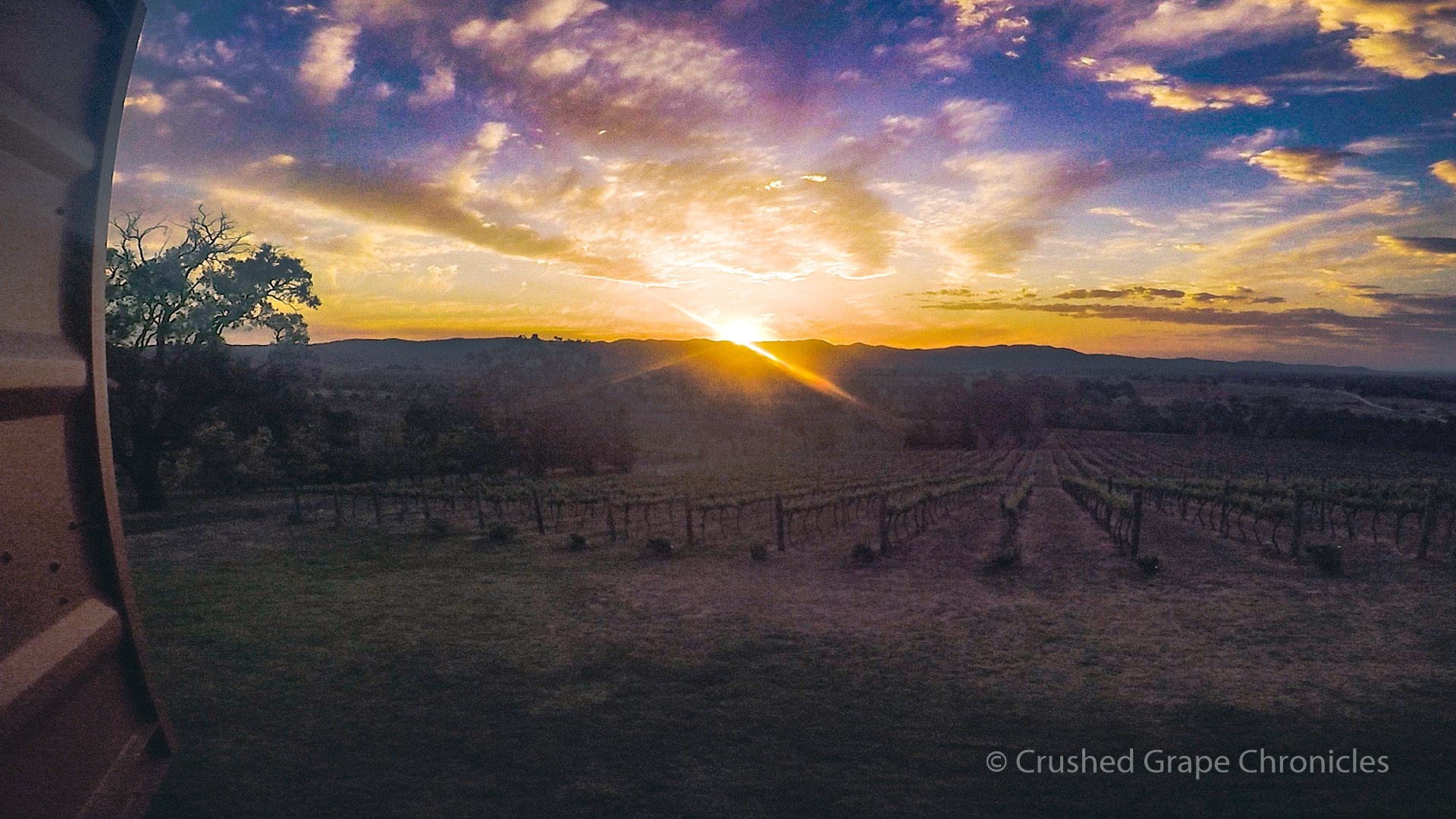 05 May A Stunning Sunset View at First Ridge Vineyard

It was sunset of our only full day in Mudgee New South Wales.  We headed out to meet Col Millot, the Viticulturist at First Ridge Vineyard on the south east side of the Mudgee Valley.  While viewing the sunset from their cellar door, we discussed Mudgee, the First Ridge Vineyard site, their wines and soils, as well as, how weather, climate change and drought was affecting them.

The tree lined drive onto the property from Burrundulla Road is a welcoming entrance.  It’s a moment of respite as you travel slowly through the dappled light through the vineyard and up to the cellar door.

Col opened up the cellar door for us. When I say, “opened up”, it’s a bit more than you might think.  This building is the elegant connection of two shipping containers. The two red boxes that we saw driving up, transform as he opens the sliding metal sides exposing the windows that bring in the spectacular view of the vineyard.  The interior is modern, but welcoming and the light at sunset was magical.

First Ridge has been a grower for 20 odd years.  They sold, and still sell, fruit around Australia.  In 2013 they made their first vintage of wine, and since then, keep 60 tons of grapes to produce the wines they sell here in the tasting room.  The beautiful tasting room was built in 2015 and has helped to increase the interest in the wines.

Mudgee – the “nest in the hills”

Mudgee, especially from the vantage point of the First Ridge Cellar Door, does indeed look like a “nest in the hills”, it’s aboriginal name.  That “nest” is the giant basin of an old volcano.

The region was colonized during the gold rush.  As Col says, “where there is mining, there is alcohol”.  In the 1860’s there were 400 hectares of vines growing here.

At the turn of the century, most of the wine here stopped.  This vibrant area continued with mining and agriculture with cattle-grazing and food production. Wine didn’t make a marked come back until the 1990’s, when large wine companies encouraged people to plant more vines.  Then in 2006, most of these companies decided to head back to South Australia, and people started pulling out vines.  Since then, there has been a 40% decrease in the hectares of vines planted in Mudgee.

That’s not all bad.  Wineries here are back to family owned and mostly boutique. The largest owner is the Oatley family, the rest are smaller, 100 to 200-ton size wineries.

This is a unique area that does a wide range of varieties well.  While still less discovered than the Hunter or Coonawarra, people are discovering the region and seeing the wines are high quality.

The climate here is temperate with hot summers and cool nights that lock in the acid causing the wines here to age well.

First Ridge Vineyard started in the mid 90’s.  It is one of the highest vineyards in Mudgee, with the highest block at 600 meters.  The soil here is rocky and volcanic, and these poor soils are great for the vines.

Col pointed out the block down the hill in front of the cellar door.  At 22 years old, the trunks of the vines were just 2 inches in diameter.  In more fertile soil down in the flats beyond here, these vines would be up to 6 inches in diameter by now.  Here the vines have smaller bunches and berries and wonderful exposure.

The site has all types of rock and soil.  The area was once an ancient riverbed and Col picks up a piece of siltstone that was found in the vineyard close to the cellar door.  It has layers of fossils, of creatures and coral, vegetable matter and shell.

“This predates anything that has bone, it’s around 300 million years old.”

This mud, from an ancient riverbed system is dense and heavy.

“You start to realize that we are very small in the scheme of things, when you look at something as old as that.”

Above the vineyard you find quartz and basalt.

“So, you’ve got sedimentary and metamorphic rock all in one.  It’s incredible.  It’s very ancient land.”

Col said, he had tasted Italian wines years ago in McLaren Vale and found them very drinkable.  They were much easier than the big Shiraz and Cabs that Australia was known for.

These grapes were already growing in Mudgee, thanks to Carlo Carino, an early winemaker at Montrose Wines.  He brought sangiovese, barbera and nebbiolo and planted them here. Knowing they would do well, First Ridge Vineyard planted sangiovese and barbera back in 1998.  Since then they have added, vermentino, fiano, pinot grigio, prosecco (glera) and Montepulciano.

We started off discussing the Prosecco, which we had been sipping on as we spoke.  Clean and bright with notes of lemon, it had a little sweetness on it.

This wine has won 3 silver medals in its first vintage.

They are also growing fiano which Col finds to be a bit more structured than the vermentino. He describes it as the most elegant and complex of their white wines.  The last of their white wines is a bright pinot grigio.  Col says it’s “like sticking your nose in a jar of pears.”

They grow sangiovese that they also use for a rosé.  To control vigor, they train these to on bud per spur.  This gives them smaller berries and bunches. With just two bunches from each bud this keeps them to 6 tons per hectare with this vigorous grape.  This kind of training also help minimize disease and intensify the flavor.

The Barbera is their flagship and it comes from the rough rocky block up the hill from the cellar door.  It is low yielding at 4 tons per acre and was just converted from spur to cane pruned.  The wines produce intense flavors of black cherry with beautiful aromas, silky tannins and a savory finish.

Lastly is the Montepulciano.  It is arch cane trained and at 2 years old was looking to its first harvest in 2019.

We finish on the tougher subject of climate and drought.  Col mentions that it has been hotter during the last 4 seasons that he has been here.

“We talk a lot these days about the warming and heating and there is no doubt there is changes in the climate.  It’s getting hotter.  The last four seasons here in Mudgee have been hot.  But those minimum temperatures are still lower. The big difference this vintage was the minimum temperatures were higher and that’s the first time I’ve seen that here.”

The Cudgegong River runs past the property, helping with irrigation. Due to the soil, they must irrigate, but the vines also have deep roots.  This makes the vines are economical with water. They average a megaliter per hectare each year. Nonetheless, water is a concern.

“…we’re in the grip of a pretty serious drought right now.  There’s no doubt that we’re a bit worried about where it’s all going. It’s alright to have a river, but if there is no water running down it, you can’t draw from it.”

There are cut backs on water entitlements in the region, to preserve water.  Col finds they must be very careful with how they manage water in the vineyard. Luckily, at this point, he has found that it has not impacted the wines.  They have no need to add sugar, acid or tannins.  The wine is simply fermented, filtered, put into oak if needed and bottled.

Water comes into play in another way.  Rain in late summer can be hard for the ripening grapes and it’s common to have high rainfall in February during harvest.  With the drought the last 4 years, this has not been an issue.  Col remembers seasons with much more rain.  In 2001 they had 18 inches of rain in February and in 2008, 8 inches fell overnight.

This site is high enough and well-draining enough that the rain runs down through the vineyards into the headlands.  It doesn’t sit in the vineyard and cause the fruit to swell, diluting the flavor in the fruit.

The Future of First Ridge Vineyard

At the time of our visit, in October of 2019, Col was feeling pretty good about First Ridge.  The cellar door had increased interest in their wines.  The wines were getting better every year.  Tourism in 2019 had increased with more people traveling domestically due to the decline of the Australian dollar.

“I think people are just a little concerned about traveling and moving around as much overseas than they used to be.”

As a result, people in Australia were exploring the wine country in their own backyard.  Mudgee, which is 3 ½ hours from Sydney, through the Blue Mountains, had become a popular weekend destination.

Since then, they had a tough summer, dealt with the possibility of smoke taint from the fires and then like everyone had to close their cellar door due to Covid-19.  They have stayed active on Facebook and Instagram.  Like so many in the wine industry they are finding ways to stay connected with the people who love their wines. For now, you can order online from their online store until they are able to open again, and you can take in the views from their stunning cellar door.

You can read more on First Ridge and Mudgee from Crushed Grape Chronicles through the links below.