On our last trip to Paso Robles, Michael and I stopped into the Kenneth Volk tasting room that is next to Lone Madrone and tasted his 2008 Aglianico.  Okay don’t try to pronounce this without assistance or you will butcher it like I did.  Let Bruno de Conciliis teach you how to correctly pronounce it.  (ah-L’YEE’AH-nee-koh)

I was doing research on Aglianico to figure out how long I should cellar this and found lots all kinds of interesting information on this variety.

In many places you will hear that this grape came from Greece in the 6th century and was used to make Falernum (it’s latin name) or Falerian wine.  Falerian wine was a favorite of the Romans and was said to be made with Aglianico and sometimes Grecco grapes.  These grapes were grown on the slopes of Mt. Falernus and is mentioned in Roman literature.  This wine was a white wine that was at 15% alcohol.  The grapes were a late harvest grape harvested after a freeze (like eiswein?).  The wine was aged in an amphorae for 15 to 20 years so the wine became amber to dark brown before drinking.  The area these vines were grown in is now the vineyards of Rocca de Mondragone and Monte Massico.  The name was thought to be a version of the word Hellenic or Ellenico the Italian word for Greek.

Okay now that I’ve given you all that rich history…DNA research shows that Aglianico is not related to the Greek varieties that were used to make Falernum.  Still…great story huh?

This grape was almost completely wiped out by phylloxera in the 19th century.  It is a late ripening variety that has strong tannins a deep black color and a firm structure.  It is said that these wines can be harsh in their youth and 5-10 years in the bottle allows the fruit profile to emerge and the tannis to soften.  These wines exhibit a smooth, rich texture with aromas of coffee, leather, smoke, dark chocolate, black fruits and mineral and tend to be complex.

Jancis Robinson has a beautiful speaks of this wine which she describes as “exuding class”.

The variety is grown in Campania where it is made into Taurasi.  Taurasi is mostly Aglianico, but may have up to 15% of other grapes, such as Piedirosso which is a fresher and more aromatic local grape or the Primitivo of Puglia. The addition of these grapes makes this wine mature earlier and leans toward fruity.  It buds early and harvests late.  In high altitudes in Taurasi it has been harvested into late November.

In Basilicata they turn this grape into Aglianico del Vulture (Vul-tur-e not like the bird!)  This wine is 100% Aglianco.  Both Campania and Basilicata are located in Southern Italy.

This variety is slowly being grown outside of Italy, thus my Kenneth Volk ’08 Aglianico!  Seghesio is also growing it in the Alexander Valley and it is now being grown in Australia in the inland wine regions.  It has been discussed that this grape could be a great alternative to Cabernet Sauvignon in California as it is more suited to the warmer climate.  By the looks of the multiple vineyards that popped up on my search for “California Aglianico”, it is finding a foothold.

So after all my research I was still wondering…should I cellar this for another 5 years?  So…I e-mailed Kenneth Volk and received a wonderful personal response.  His Paso Aglianico is grown in Pomar Junction and as it often does not have the opportunity to be as late ripening as traditional Italian Aglianico it tends to not cellar by typical Italian standards.  He suggested that the ’08 was drinking well now and will probably drink well for a few more years.  Since it was drinking well now I asked for his suggestions on pairings.  He did tell me that this was a food wine and suggested something protein rich like lamb, waterfowl or a rustic pasta.

Well…now my day was complete.  I had two correspondences from Kenneth Volk (who I have a bit of a wine crush on) and determined what I was having with Thanksgiving dinner.  Michael and I started a new tradition last year in that, since it is just the two of us, rather than cooking a whole turkey, we indulge in a duck.  So….that will be my waterfowl.

And I have to say a huge thank you to Mr. Volk for personally answering my questions so thoroughly about his wine.  Not only is he a genius, he’s a nice genius!  Now to figure out what to pair with the duck! 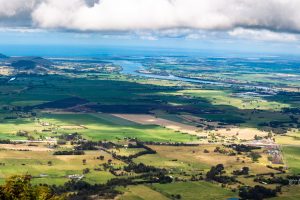 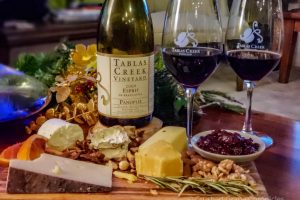 The 12th Day of Wine demanded digging in the cellar[...]