Located in the Chehalem Mountains, Beckham is actually on Parrett Mountain on the south east end of the range.  We visited them in July of 2018 to hear their story.  It was a beautiful morning and Annedria set us up on the patio next to the tasting room, (which has a beautiful view), for our tasting.

Andrew was busy in the studio making amphorae.

We had discussed the creation of the vineyard (you can see that in our post here).  Now we move on to Annedria telling us about planting their Riesling, expanding the vineyard, their inspiration from the Jura in France and then how the Amphorae Project began.

When choosing a white grape to plant, they settled on Riesling and planted in 2013, the traditional way on the steepest, rockiest part of their vineyard.

“We had to hand pick with a pick axe every hole for each vine because it was just cobble and it’s taken a little while to come along.”

They had warm vintages from 2014 to 2017, so the vintage in 2016 was small with an even smaller vintage in 2017 since it is dry farmed.  Annedria was hoping they might have enough this year to do something.  She’s really looking forward to some Riesling.

When the Riesling was planted they had 6 acres of Pinot Noir and 1 acre of Riesling on their 8 and a half acre parcel.

“I was doing my happy dance thinking we were done.  Now we were finished. No more breaks spent planting vines, pounding posts, no more catch wire. All of the infrastructure was finally in.  We were done.”

But Andrew was contemplating the acreage behind them.  He spoke to the owner and made a deal to purchase a bit of the parcel.

The parcel was covered in Douglas Fir.  The family who owned it were Oregon homesteaders and had gone through a variety of crops on the land before settling on timber.  The owner liked that they were farming and was happy to make a deal for the property.

The county, however, couldn’t parcel off the property in smaller blocks, so they ended up with the whole 20 acres.

Soon Andrew was thinking of what else he could plant and the journey of contacting the timber guys, pulling out the Douglas fir and all that follows began again.

They cleared 10 of the 20 acres and prepped it.  At this point they had a bit more knowledge on how to lay out a vineyard and had decided to go with higher density, up to 2000 vines per acre from 1200.

That makes for just a few vines…2000 vines times 7 acres…that’s a chunk of change. They were also ready to go with North American root stock.  The previous vines were own rooted, which was pretty safe up here on Parrett Mountain, as they do not share equipment.

To save a bit, they took cuttings of North American root stock and planted them.  They could get the vines going and when they were ready, purchase bud wood to graft in place.

Falling in love with the Jura

Around this time, they also managed to take their first real vacation in years and and visited France.  They visited Burgundy, which Annedria said was wonderful, but they had enough Pinot Noir planted.  When they visited the Jura, they felt completely at home. This region is one of the undiscovered areas of France for many people.

They visited cellars and garages in the Jura and decided that these were the varieties they wanted to plant.

There were a couple of vineyards that had planted Trousseau Noir, so it wasn’t completely new, but in around May of 2018 they grafted over 2 acres to 3 or 4 clones of Trousseau Noir, including the Bastardo clone.  They also grafted an acre to Sauvignon Blanc and an acre to Aligote. While they don’t anticipate getting Poulsard, they are looking to add Savagnin.

They also have a test block of a couple of Italian varieties, high alpine Nebbiolo, Montuni and Albana.  These last two from the Emilia Romagna region.  With global warming they are testing the waters to see what might start to grow well.

Making the cool climate style of Pinot Noir that they like is becoming more of a challenge without doing things like making additions, adding water, reacidulating etc in the winery, with the multiple warm vintages that they have been experiencing.  They’ve been doing it, but it is tougher.

A vineyard, a winemaker and an artist with clay – The amphorae project

Back to 2013.  They planted the Riesling, bought the new property, started clearing and one night,  Annedria has half a moment to flip thorough a Wine Spectator and comes across a piece on Elizabetta Foradori.

“I was flipping through waiting for my computer to load and I see this photograph of this stunning Italian woman in her underground cellar and row after row of these beautiful terra cotta vessels.  And it was Elizabetta Foradori in her cellar.  And I thought about it 3 different times before I decided to show the article to Andrew, because I knew him well enough that I didn’t want him to get this crazy idea that he needed to start making amphorae, because we had enough on our plate.  But I showed him the article and said “you know I’ve heard of this winemaker and I’ve heard of her wines, we should see if we can get some in Oregon.”  And he flipped through and said “I can make those”  I said “ I know you can dear, but that’s not the point.  How ‘bout we try the wines first?”  And he ordered clay the next day and started working on shape and size.”

This was in his wheelhouse.  Andrew’s pottery had always been large scale, now it had a purpose.  They tried to keep this quiet.  I mean… it was an experiment.  But friends found out and soon there was quite a bit of interest. At this point they just had the amphorae, but they did not have any wine made in it.

Trials for amphorae – the experimentation

Andrew worked with a chemist trialing clay.  They searched for an Oregon clay, but the closest they could find was from Sacramento in the delta.  Most terracotta is used for pots for plants, so there are things like barium and color stabilizers in it that would not work for making wine.  The clay body has changed over the years as he trialed the wines.  As the potter and the winemaker he can look at a vintage and see where he might like to tweek the vessel or adjust firing temperatures.  It’s all a big experiment, which, like anything with wine, takes time.

He was scientific in his testing.  The first year they used their estate pinot noir and just did primary fermentation in the amphorae, then pressed and aged in neutral oak.  There were just 24 cases of this wine.  They did not additions other than a touch of sulfur before bottling to keep the variables down as they tested.

After ferment was complete, he had this empty amphorae just crying to be used, so they picked up some Pinot Gris that another winemaker had and did a little skin contact Pinot Gris.  This first year was 2 weeks skin contact, the next 30 days, the next year 40 days and now he does 10 months.

So in 2014, happy with the initial test, he spent his entire summer break making around 30 amphorae.  The clay body was slightly different this time.  They took a little more of their Estate Pinot Noir fermented it in the amphorae, pressed and then separated half to amphorae and half to neutral oak for aging.  These were later bottled separately as Creta for clay and Ligna for wood.

“ It was really fun to pour those wines side by side because it was split 50 50 down the middle between what people liked.  Because the ligna wasn’t too far off the beaten path.  You could tell there was a difference.  There was this textural component, this purity but it wasn’t so different to be too far out there.  Where as the Creta in 2014 was very different, was very iron driven, there was a I don’t want to say a “blood character” . There was a very clay textural component.”

But the point wasn’t to taste the clay, the point was to get a purity of place.  So he tweeked the clay body again and settled on one in 2015 that he has moved forward with.  He know feels that you get that textural component, but it’s not so overt that the clay is what stands out.

On to the Winery and fields of amphorae

At this point Annedria pours us a little of their Syrah/Viognier and we head up to the winery and studio. The Winery is modest, with the views they have the majority of tastings are done in the tasting room or on the patio, but they can do tastings in the winery. The building was filled with barrels and amphorae in multiple shapes.

Annedria spoke to us about the amphorae, the progression and the process, going through Andrew’s experiments with firing temperatures and how they change the oxygen exposure and can even impart reductive qualities to the wine if fired very hot.

She also mentioned some other vintners who were using Andrew’s amphorae.

We had seen a couple of these amphorae when we visited Montinore and spoke with Rudy Marchesi. I also remember seeing later that Ross & Bee of Maloof wines had picked up an amphorae, and I look forward to tasting the wine they make in this.

We continued on and met Andrew in the studio where he was in the process of making another amphorae. I think that you can look forward to tasting many wines aged in his amphorae in the future, from winemakers around the region and beyond.

Beckham Estate Vineyard is located at

They are open typically for drop in tastings on Friday, Saturday and Sunday from 11 am to 5 pm. Outside of that time you can feel free to contact them in advance to schedule a tasting by appointment. 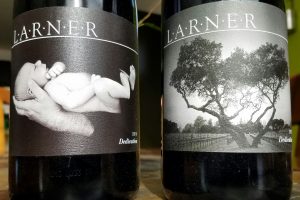 Syrah. You know it. You have heard it called Shiraz[...] 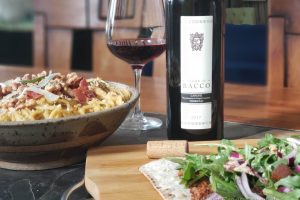 Jump to Recipe Nebbiolo to begin 2021! The #ItalianFWT writers[...]