The #ItalianFWT writers are starting the year with their favorite Italian Wines led by our founder Jennifer of Vino Travels.  I have chosen Nebbiolo.  I won’t claim that it is my favorite Italian Wine, I mean there are so many, how could I just pick one?  But, I do enjoy Nebbiolo and I had one in my cellar sent to me by Terre di Bacco which was delicious.

Nebbiolo – often described as “tar & roses”, is the wine of Barolo and Barbaresco.

Nebbiolo, a black-skinned grape variety is found primarily in Northern Italy in the Piemonte region, where it has been grown since the 13th century.

The Langhe DOC encompasses 54 communes in Langhe and Roero.  This largest appellation in terms of area that it encompasses within the Cornsorzio di Tutela Barolo Barbaresco Alba Langhe e Dogliani.

Nebbiolo is the oldest indigenous red grape in the Piemonte.  The name comes from “nebbia” the word for fog or mist in Italian.  Perhaps the name comes from Nebbiolo’s late harvest time in late October when it is picked in early morning autumn fogs.  Perhaps it is for the velvety look of the thick bloom on the grapes that makes them appear “misty”.  Perhaps it refers to “noble”, the reason for the name is up for debate.

The first mention of this variety comes in 1266 when a record of a wine called “Nibiol” is made.

This grape is the first to bud in April and the last to harvest in late October.  It tends to be finicky, needing constant and elaborate attention. It prefers calcareous marl soils, doesn’t like quick temperature changes, and to ripen its tannins needs south or south-west facing slopes, that are at just the right altitude to keep the risk of spring frosts the lowest.  On top of that, it is susceptible to viruses.

Often called the “Queen of red grapes” this one can be a Diva!

It goes by many names, from the regional names of Barolo and Barbaresco to Spanna in the Novara and Vercelli hills.  In Carema on the border to Valle d’Aosta, it is called Picutener, and in Valtellina, in Lombardy, they call it Chiavennasca.

It can be found outside of Italy, in Oregon, Washington State, California, Australia, and South America.  We recently enjoyed a Nebbiolo from Australia’s Orange wine region in New South Wales.

Medium garnet in color the wine had a nose of Red fruit, Chinese 5 spice, white pepper, rose, and sweet tobacco.

This nebbiolo was dry with Medium/high tannins and acid and pronounced flavors of tart red stone fruits.  The tannins were grippy on my teeth but were fine, not gritty.   This is not a deeply nuanced wine, rather it is straightforward, delicious, and made to pair gloriously with food.

*This wine was sent to us as a media sample.  No other compensation was received. All opinions are our own.*

Nebbiolo tends to be pretty versatile with food!  Garlic, truffles, capers, butternut squash, olives, wild mushrooms, polenta, leeks… It likes tomato-based sauces and goes well with the cheeses of the region Parmigiano Reggiano and Pecorino.  This is a high tannin wine so pair it with fat!  Rib-eye, sausage, duck, bacon.

We had butternut squash and used that as our takeoff point.  I found a recipe on Joyful Healthy Eats to riff on.  https://www.joyfulhealthyeats.com/creamy-butternut-squash-alfredo-pasta/

Of course, this recipe was working to be healthy, and if I was going to pop open a Nebbiolo I was going to luxuriate in something a little less so.  If you want to go the healthy route, you are welcome to do that!  Click through to her recipe above.

My recipe incorporated the bacon a bit more than crumbling it on top.  We want fat, so let’s use that bacon fat and all the deliciousness it brings.  I also happened to have some mushroom stock, from rehydrating some mushrooms recently, so I added that to the chicken stock to add those mushroom notes.  I also decided to top this with some toasted bread crumbs and walnuts in addition to the bacon for a bit of crunch.

The wine highlighted the umami notes from the bacon and onions and had nice acid to balance the rich butternut sauce.  Michael found that the butternut mellowed the youthfulness of the wine, making it come across as a bit older and more serious.  He also liked it very much with the sage, the coolness of the wine giving a lift to this herb.

You can find that recipe here.

We also did a walnut mushroom flatbread.  This dish had a base of onions, mushrooms, and walnuts in a tomato sauce with a blend of sweet paprika, cumin, cayenne, and cinnamon.  This was topped with arugula, sliced dried apricots, a lemon-tahini dressing, and a sprinkle of sumac.

The wine pulled the spice notes to the front, stopping before becoming hot.  It was brilliant with the tomato, mushroom, walnut sauce.  It was good again with the onions, which is this dish was raw.

Nebbiolo is delicious young, but can evolve to become something even more magical.  It’s easy to think that once you have tasted a wine of a certain variety, that you know it.  The truth is, every place it’s grown the wine will be slightly different.  Even within the same place, the vintage will make the wine unique and then as a wine ages, it continues to evolve.  I have tasted a few Nebbiolos, but that is just the beginning, just within this one variety, there is so much more to explore.  That my friends is the joy and endless rabbit hole of wine.

This is a pretty simple dish, that can be ready in 30 minutes. Bacon, butternut squash, onion, garlic, butter, stock, herbs, some milk to make it creamy all in with the spaghetti we all have in the cupboard. You can dress this up with herbs and garnish with walnuts and toasted breadcrumbs for a bit of texture. This warm wintery dish paired beautiful with a young Nebbiolo wine.

You could substitute frozen butternut squash cubes in this recipe and switch to a different pasta. Mix up your herbs or find different garnishes. This is a filling dish and it easily feeds 6. We had it for dinner and lunch, and dinner again with just the two of us.

The writers at #ItalianFWT

This bunch of writers gather the first Saturday of each month to collectively write on an Italian Wine topic.  This month we were digging into our “Favorite Italian Reds or Whites” led by our founder and leader, Jennifer of Vino Travels.

We will be gathering on Twitter on Saturday morning January 2nd, 2021.  You can join us to share your favorite Italian wines, just use and follow the hashtag #ItalianFWT at 11 am EST or 8 am PST!

We all have our favorites, so you will find pieces on wines and regions from all over Italy. Here are the pieces we have shared!

More on Wines from Italy with Crushed Grape Chronicles 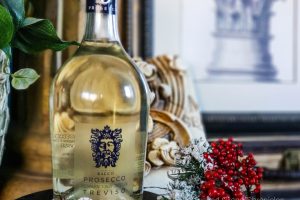 Beginnings and Endings The year 2020. Unexpected, unpredictable, a year[...] 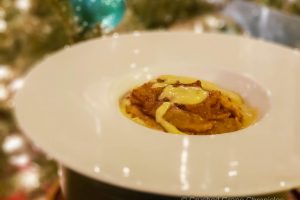 Hungarian Nut Cake was my mother’s favorite cake, as her[...] 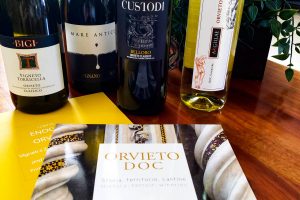 Wines from the Orvieto DOC via Consorzio Vini Orvieto