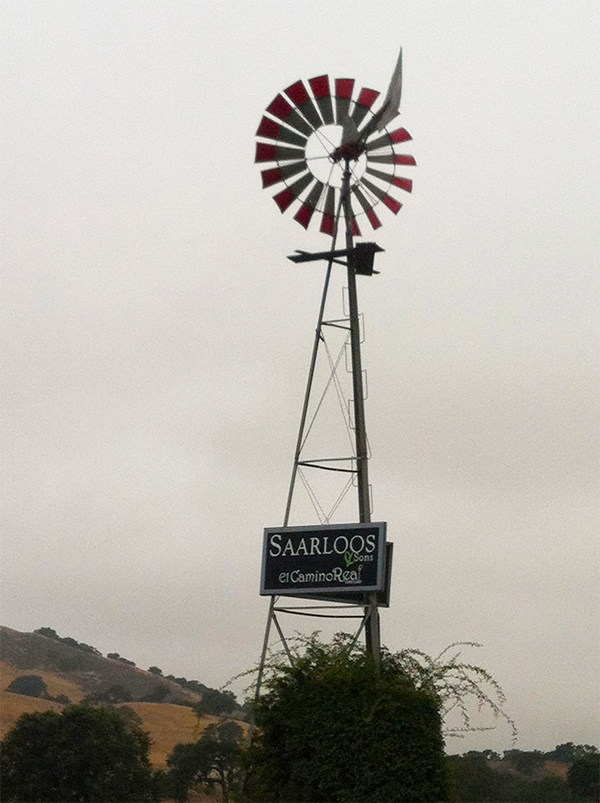 Ballard Canyon is the newest of the AVA’s in Santa Barbara County, established in October of 2013.  This relatively small AVA encompassing only 7,800 acres sits at the center of the Santa Ynez Valley with Los Olivos to the North East and Solvang to the South. It produces Cabernet Franc, Cabernet Sauvignon, Grenache, Roussanne, Sangiovese, Sauvignon Blanc, Syrah and Viognier.  Syrah accounts for almost half of the planting. 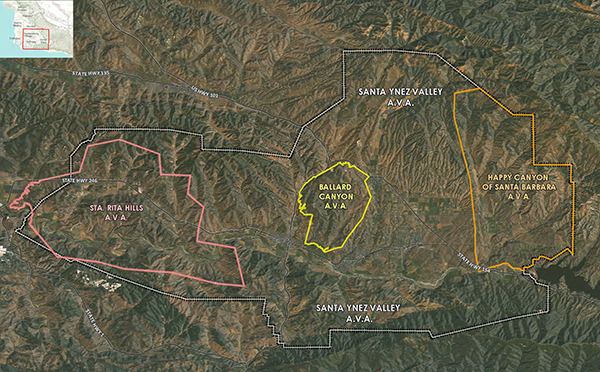 Ballard Canyon runs North-South, which protects it from the winds coming through the transverse valley than runs through the Santa Ynez Valley.  Happy Canyon is thought of as the warmest part of the region with daytime temperatures of 102, but it also drops to 48 overnight.  Ballard canyons highs are a little lower, but their nighttime lows are also a little higher, this allows the  grapes to stay warmer over night and warm up more quickly in the morning.

There are 18 Vintners and growers in the Canyon and 6 wineries:  Larner, Stolpman, Rusack, Saarloos & Sons, Jonata & Beckmen.

The first vines were planted in this area in 1974 at the Ballard Canyon Winery.  Today this property is Rusack Vineyards.  The 17 acre estate was replanted in 2003 with varieties of grape that would capture the character of Ballard Canyon.  It is now planted in Sangiovese and Syrah primarily with bits of Savignon Blanc, Semillon and Petite Sirah.  Everything is farmed in small lots.

The Rusack’s bought this property in 1995 and in 2013 hired Steven Gerbac to be their winemaker. In addition to their Ballard Canyon property, the Rusack’s have a newly planted vineyard on Santa Catalina Island (but that story is for another day).

The winery is set back in on the property and you follow the winding drive through the old oaks to their tasting room. They have a lovely redwood deck on the front of the tasting room with tables and great vineyard views.  It is shaded by the oaks so it makes the perfect spot for a picnic.

Larner is on the southern end of Ballard Canyon.  When Michael and Christine Larner purchased the land in 1997 it was nothing but sage and chaparral with Texas Longhorns on the property.  Now the 34 acres of vineyard include 23 acres of Syrah, 6 acres of Grenache and smaller plots of Viognier, Malvasia Blanca and Mourvedre. For a number of years they sold fruit to wineries, but in 2009 they began making their own.

Michael Larner is also the instigator behind the Ballad Canyon AVA.  In 2010 the vintners in Ballad Canyon gathered to coordinate an event on Syrah.  Michael got them together again after the event and recruited Wes Hagen  of Clos Pepe to help them develop plans for creating the AVA.

You can visit the Larner Tasting room is located in Los Olivos.  They hope eventually to have a beautiful tasting room on their property in the old Ballard General Store.  (again, another story for another day)

Tom Beckmen purchased a 365 acre hillside property in 1996 that is now Beckmen Vineyards.  With elevations of up to 1250 feet, this property would become the Purisima Mountain Vineyard. Tom & his son Steve farm this property and  they are certified biodynamic. They vineyard is planted with seven clones of Syrah that fill 18 blocks, five clones of Grenache that fill 8 blocks and smaller plantings  of Counoise, Grenache Blanc, Cabernet Sauvignon, Rousanne, Marsanne, Mourvedre and Sauvignon Blanc. The soils here are clay and clay loam with a limestone subsoil, which while typical of the soil in Rhone, is a rarity in California.

Their tasting room is at the winery and is south of Los Olivos.  Take a picnic and enjoy the views from one of the three gazebos at the duck pond after your tasting!

Stolpman was founded in 1990 by Tom & Marilyn Stolpman.  This vineyard in the limestone hills was turning out fruit for cult wines like Sine Qua Non & Ojai Vineyards, until in 1997 they started producing their own wines.  Their winemaker Sashi Moorman (who also works with Sandhi & Evening Land) joined them in 2001 and works closely with the Vineyard Manager Ruben Solorzano.  They have experimented with high density plantings and dry farming.  They produce Syrah, Roussane, Sangiovese, Sauvignon Blanc with limited plantings of Grenache, Viognier, Petite Sirah and Chardonnay which they mostly use for blending.  Today Tom’s son Peter manages the vineyards and winery. 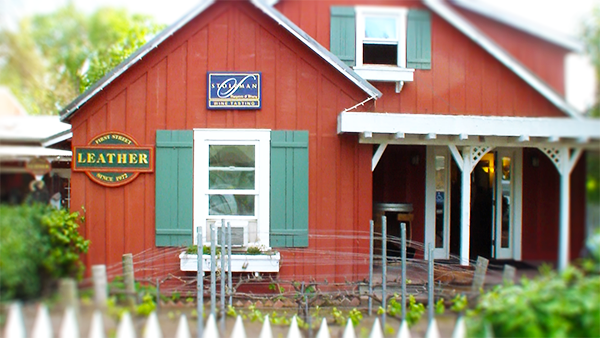 You can find their tasting room in Los Olivos on Alamo Pintado, in their little red cottage.  The cottage has fables. One says it was moved here from Arroyo Grande in the early 1900’s. Another claims it was built from scrap lumber from an old military barracks.  Regardless the Stolpman’s have filled it with a great staff and designed a Tuscan inspired bar. Plus they have a picnic area under the persimmon tree out front.  In the summer they even have a farm stand with local produce.

Jonata (pronounced Ho-na-ta, which is the Chumash word for “live oak”)has an 84 acre vineyard with sandy soil planted in Syrah, Sangiovese, and Sauvignon Blanc.

When they originally bought the property the French vineyard expert they brought in found only 5 acres of land on the 600 acre property that he felt were suitable to growing grapes.  Matt Dees joined them in 2004 as their winemaker and Ruben Solorzano is their vineyard manager.

Here there is extreme detail in the growing.  Each shoot and cluster is individually manicured.   Lots are separately pulled from each distinct part of the vineyard and put into different barrels or tanks before blending.  Well known French wine expert Michel Rolland comes in to check aging potential before bottling.  As a result of all of this extra attention and the fact that if a vintage doesn’t live up to their standards, they simply won’t produce a wine from it, these bottles can run up to $125 per bottle. Their 2010 La Sangre  de Jonata Syrah was given 97 points by Wine Advocate.

A little back story.  This winery is owned by Stanley Kroenke, a real estate developer who owns the Dever Nuggets and the Colorado Avalanche.  He is also one of the leaders of the consortium that purchased Screaming Eagle. 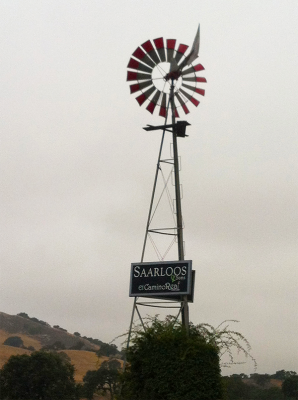 Last but not least I will mention Saarloos & Sons.  Their Windmill Ranch Vineyard lies within this AVA.

Saarloos & Sons is a family business that is 4 generations in the making.  Each of their releases is unique and is never duplicated.  Their goal is to capture the year in a bottle and bring you a high quality wine that they name in honor of a family member.  They have a 250 year plan, thinking not just for the next generation but for the next 50.  Their goal is “Honoring + Preparing”  and their wines are heartfelt and unique.  Their winemaker and resident chronicler is Keith Saarloos.  Check out the blog for amazing vineyard videos and for philosophic posts on life, family and farming (amongst other things).

And head to their tasting room in Los Olivos.  If you are lucky, Brad will be there and will fill your glass and your spirit as he passionately talks about the wines and his family that made them.

And…have to mention, if you are there on the weekend, try the cupcake pairings! 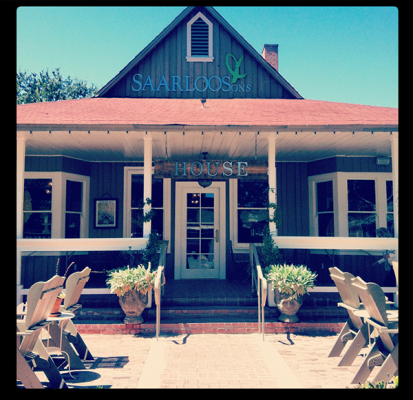 Over the upcoming Vintners Spring Weekend you will be able to taste many of these wines at the Grand Tasting on Saturday April 12th.  In addition, Steve Beckmen will be leading a Vineyard Hike with with wine at the Purisima Mountain Vineyard on Friday Spril 11th.  Larner will be pouring wines at the Barrel Toasting Seminar and Tasting at the Buellton Bodegas on Friday evening. Also Friday evening Beckmen and Larner will be pouring at the 90+ Wine & Dine event at the Fess Parker Doubletree Resort in Santa Barbara.  Beckmen will also be pouring on Sunday at the Farm-to-Table Picnic at the Fess Parker Ranch. 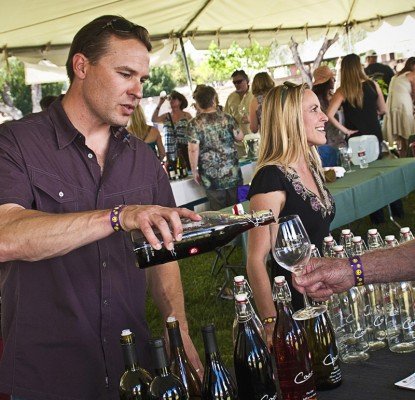 Visit http://www.sbvintnersweekend.com  for all the Spring Weekend Events or http://www.sbcountywines.com for anything you want to know about the Santa Barbara County vineyards or wineries.