Today our thoughts go out to the wineries we visit 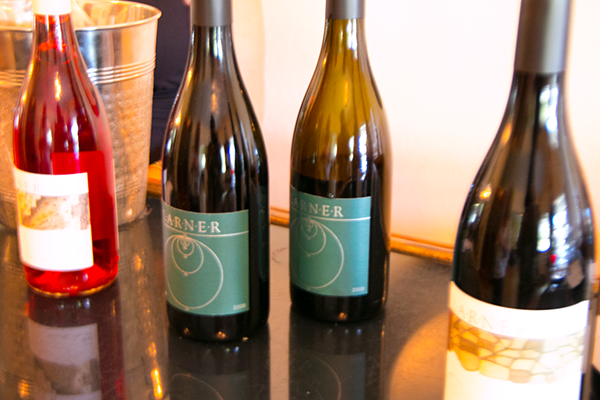 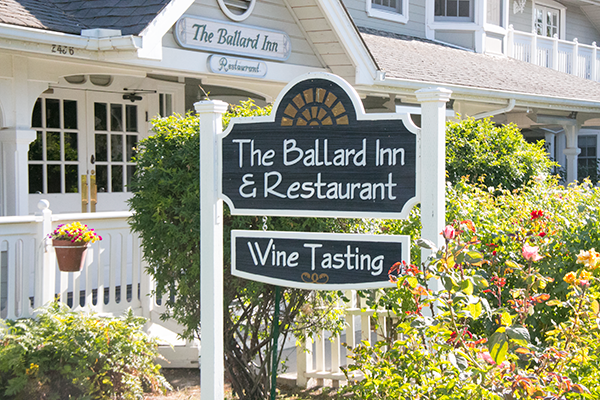 The warm atmosphere of the Ballard Inn, was the perfect setting to enjoy the beautiful wines of Larner Vineyard and Winery grown in the brand new Ballard Canyon AVA (by the man who got this AVA going) and have them paired with the Asian & New French inspired dishes of Chef Budi Kazali. 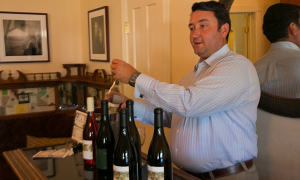 As guests arrived, Michael Larner was pouring his 2012 rosé, and the guests found seats in the comfortable parlor, or ventured back out onto the porch to watch as the sun started to dip toward sunset. The rose is a GSM made in the saignée method, bleeding off the juice.  It is about 55% Syrah, 30% Grenache and the rest Mouvedre. 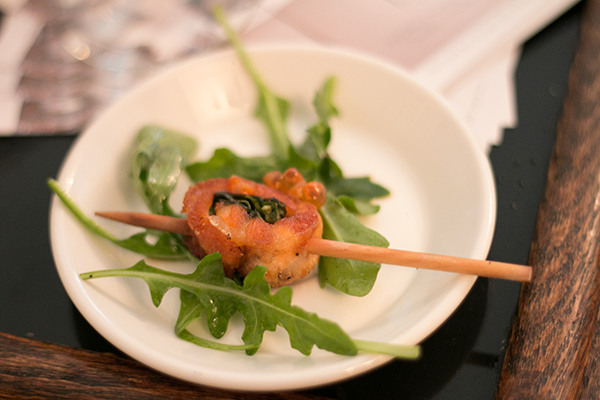 The 2013 Malvasia Bianca came out next as well as passed hors d’ouevres. Conversation was light and easy, but we were all waiting for the main event. Table by table the guests were seated in the small dining room that holds about 50, and Michael spoke about the wines and the things that make this place so special for him. This is the place that he and his wife Christina come to celebrate momentous occasions, so The Ballard Inn, Chef Budi and great memories are all wrapped up together for them. Holding their first winemaker dinner here, was really the icing on the cake.

The menu was spectacular 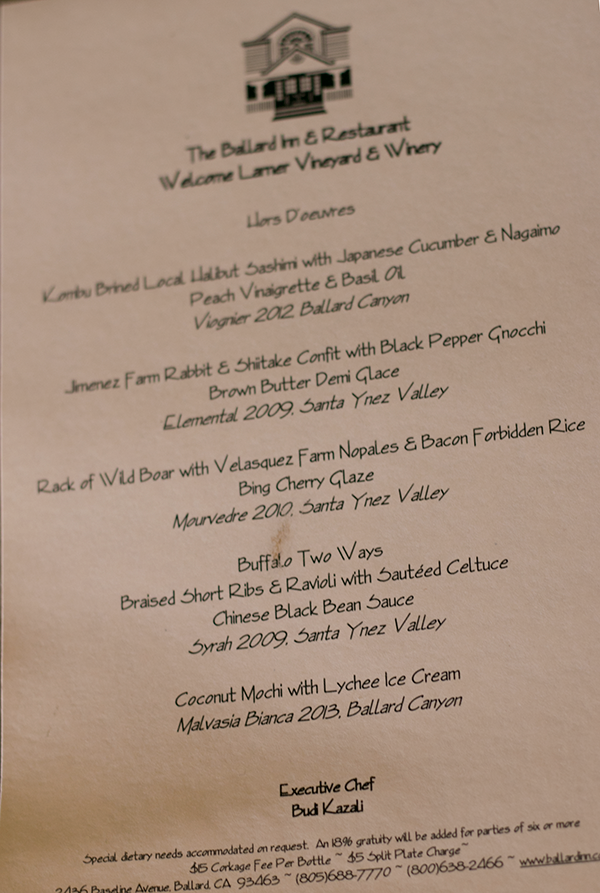 As we came to the table Michael began with a little background.

Larner is about Geology Origins and Territory. 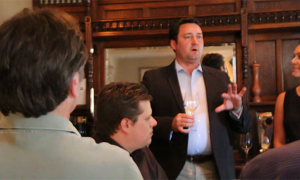 Michael’s background is in Geology and he spent time doing geotechnical engineering. His parents Stevan & Christine had been looking since 70’s for a vineyard to take them into their retirement. In the late 90’s found this place in Ballard Canyon and invited him to join them in the vineyard venture.

He came out and fell in love with the place.

Michael finds that there is a synergy between geology and winemaking. Both get you out in the field getting dust on your feet and sunburnt.

Viticulturalists talk about soil. Soil starts from the decomposition and erosion of something else and that is the geology of it. This is the “origin” of the soil.

In France they talk about terrioir, which is the expression of climate & soil.   Here in America that would translate to “territory”. The Larner “territory” is Ballard Canyon. They seek to express this territory in their wine.

So there you have it. Geology, Origins, Territory. That is what Larner Wine is all about.

We started dinner with the Kombu Brined Local Halibut Sashmi with Japanese Cucumber & Nagaimo Peach Vinaigrette & Basil Oil paired with the 2012 Larner Viognier. I will admit..I had to go look up Kombu and Nagaimo and here’s what I found. Kombu is an edible kelp that is often used to flavor broths. Nagaimo is an Asian yam that can be eaten raw and is typically shaved or grated. Regardless, the dish was light and nuanced and with the peach vinaigrette, it tied in beautifully with the wine. You should have seen us all laying bits on our fork to create the perfect bite.

The second course was Jimenez Farm Rabbit & Shitake Confit with Black Pepper Gnocchi & Brown Butter Demi Glace, paired with 2009 Elemental, GSM blend. This blend is where Michael gets to be more creative, channeling his wife’s artistic energy. For him a blend doesn’t have a standard bar that it is striving to reach like a 100% variety wine does. You can blend it to make you and your palate happy. The name “Elemental” comes from blending these separate elements: Syrah, Grenache and Mourvedre. This wine is meant to be multidimensional, pairing with anything from pizza to the Rabbit and Mushroom dish that Budi created to accompany it.

The 3rd course was the one that Emily had been waiting for. Emily runs the tasting room and deals with the social media and much more for Larner and she loves the Mourvedre. Typically Mourvedre is a blending grape and it is rare to see it on it’s own. Since Michael keeps all his lots and clones separate for as long as he can, he has an opportunity to see them grow and evolve before blending. The 2010 Mourvedre surprised him with expressions of game spice, chocolate spice and crushed rock characteristics and he determined to let it stand on it’s own. Budi paired this with Rack of Wild Boar with Velasquez Farm Nopales & Bacon Forbidden Rice with Bing Cherry Glaze. I got to watch as Emily took her first bite, her eyes closed and I think she might have even moaned a little. It was perfect. It is rare to see something as gamey as Wild Boar on a menu, but the “gaminess” is what made it pair so well with the wine, that and the cherry glaze which pulled up the fruit character. I will admit to not knowing what Nopales were. The word sounded familiar, but within this context I couldn’t place it. Understandable I think, Nopales are the paddles of the prickly pear cactus, they were unexpected and delicious.

The 4th course was to pair with Ballard Canyon’s signature wine, Syrah. Syrah is the poster child for Ballard Canyon and by far is the most widely planted grape there. While it is planted all over Santa Barbara County, it flourishes in Ballard Canyon with a structure and minerality that you don’t find elsewhere in Santa Barbara. The Larner Syrah is made up of a about 7 different clones and is sourced from all over the vineyard. The lots are kept separate and then brought back together to blend giving you a synopsis of the Larner Vineyard. The pairing for this went exotic again with Buffalo prepared 2 ways. First braised Buffalo short ribs & then a buffalo ravioli with Sautéed Celtuce in a Chinese Black Bean Sauce. (full disclosure..we all went “Celtuce? is that like a lettuce?” So let me set the record straight, it is also known as “stem lettuce” or “chinese lettuce” and it is the stem that it used.)

Our last course was dessert and we enjoyed a different side of the Malvasia Bianca here paired with the Coconut Mochi with Lychee Ice Cream. The nose on the wine and the taste and smell of the dessert were really complimentary.

At this point Budi made it out of the kitchen to speak to us. This was a fun dinner for him, pairing with wines he loves and mixing it up with things outside the norm was fun for him. He did also mention one of the big perks for him with these dinners. “Everybody orders everything and No left overs!” 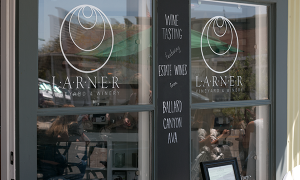 If you find yourself in Santa Barbara, make the trip to the Ballard Inn. Budi’s food is not to be missed. Stop in Los Olivos and do a tasting with Larner Wines. You won’t be able to leave without a bottle or two.