Bordeaux… You think rich red wines, Cabernet or Merlot based. Or perhaps you think of Sauternes, those luscious sweet wines from southwest Bordeaux. But when you think of Bordeaux, do you think of bubbles? Probably not.

It’s not easy to find crémant de Bordeaux in the US. I checked local wine shops, to no avail and then searched online. After going through 8 sites, I found 3 crémant de Bordeaux wines on one of the larger sites. I snapped up 2 bottles and noticed when I went back to jot down the details on the wines, that I had purchased the last bottle they had available of one of these wines. (Okay…I did find one by the glass at a local restaurant. More on that later.)

So why am I talking about them, if they are so hard to find? Well, like with anything, supply is often dictated by demand. So let’s increase the demand. Go ask for a crémant de Bordeaux! Let’s get a few more available in the marketplace!

These are delicious sparkling wines made in the traditional method that are a fraction of the price of Champagne!

The word “crémant” means “creamy” and refers to the fine bubbles in these wines. (Notice that fine stream of bubbles coming up from the bottom of this glass).

There are some rules for using the term “Crémant”. (Crémants.com)

Crémant de Bordeaux is one of eight french Crémants.

These are classified by region and include:

While sparkling wines have been made in Bordeaux since the 1800’s, the appellation was not official until 1990! While production has been typically pretty low, it’s currently increasing, especially the rosé. Two of the 3 wines I found were rosé. This is probably to be expected in this region. Crémant de Bordeaux is actually one of the largest appellations in France in regards to geographical area with more than 500 different vineyards. (Bordeaux-Magazine-US/The-Ultimate-Guide-to-Cremant-de-Bordeaux)

As of 2018 crémant de Bordeaux was selling 6.4 million bottles each year. The overall Bordeaux AOC encompasses 111,400 hectares, 910 of these hectares are designated for Crémant. Most of these wines are sold on the French market, with just 20% headed to export markets. (Crémants.com)

So the other great thing about crémant is that you get to taste sparkling wine from varieties other than the Pinot Noir, Chardonnay and Pinot Meunier of Champagne. These wines are made from the grapes of the region and for Bordeaux that means…

Primarily, as expected, with rosé you see Merlot and Cabernet Sauvignon used for these wine with smaller amounts of the other grapes sometimes. Typically these are Cabernet Sauvignon dominant. For the white sparklings, again, the primary white grapes of the region and they are Sémillon dominant. Keep in mind that rosé just indicates skin contact for color, I had a white crémant that had Cabernet Franc as part of the blend. It was not allowed extended skin contact so it imparted no color to the wine.

On to the Wines

Remember when I mentioned that I found a crémant de bordeaux by the glass locally? Well this was the one. I had already ordered the wines online, when a friend and I had dinner at True Food Kitchen. They offer 3 sparkling wines on their menu and one was the Amelia Brut Rosé. The bartender was kind enough to let me do a bottle shot.

They served this in a coupe and the bubbles were really hard to see, but the wine did feel effervescent on my tongue. When we served this at home, I noticed the same thing. It is aromatic with red and black fruit notes.

Sémillon is the main grape used in the sweet white wines of Sauternes. It’s also one of the major varieties from the Hunter Valley in Australia, where we were able to taste quite a few dry sémillons. This variety ages very well developing nutty flavors.

Suggested pairings for the Amelia rosé included “flavorful cheeses, fresh seafood or meats, like duck, chicken and pork, with flavorful, fruit-based sauces”. The Calvet…well, it was tougher to find information, but I found mention of serving it on it’s own or with dessert.

After a small snack of raspberries, black berries and cheese crisps, I settled on surf and turf for dinner! We did a simple salad with crab and then bacon wrapped filets that I topped with a berry sauce. (Blackberries, raspberries, rosemary, sage, red wine, salt, pepper and worcestershire sauce). We finished off the meal pairing with apple turnovers. (Yellow fruit? That’s all I could come up with).

The Calvet went well with the crab salad, the Amelia Brut Rosé was heaven with the steak. The berry notes pulled to the front with the berry sauce and the fat in the bacon was balance beautifully by the acid in the wine. You know, bubbles, they are just really wonderful. They are joyful and they clean your palate making each bite as delicious as the first. I was sad when my steak was gone.

The Calvet went beautifully with the dessert, nicely playing off the sweet softness of the apples.

While I was only able to find these two crémants, I do have a friend in Bordeaux who wrote a piece on one of the larger producers in the region. Les Cordeliers where they have been producing sparkling wines for over 120 years. It’s well worth the read and has some stunning photos.

Jennifer has tons of great insider information on the Bordeaux Region that you can find on her site Bordeaux Travel Guide.

Of course the reason we are discussing crémant de Bordeaux is because it is the French #Winophiles topic for March! (Thanks Guys for an excuse to drink Crémant!) You can join us on Saturday March 21st at 8 am PST on Twitter, following #Winophiles to join the conversation and hear about all the Crémants we all tasted! Then for more info…check out all the pieces below! 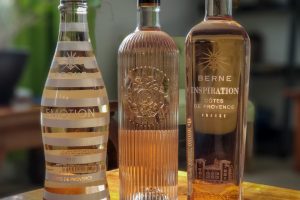 Provençe … Even the word itself sounds like a sigh,[...] 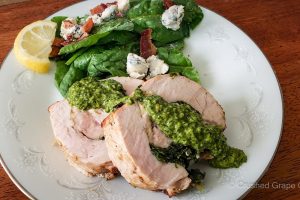 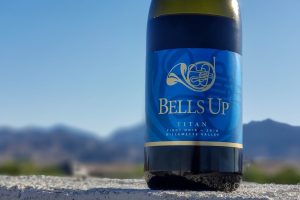 BBQ and a Titan from Bells Up

Bells Up They identify as “Micro-boutique and un-domaine”. Bells Up[...]