It’s Cabernet Franc Day! So we are celebrating by pulling a bottle out of the cellar. Our Cabernet Franc today comes from the Yakima Valley in Washington and is made by Owen Roe.

Owen Roe O’Neill was a seventeenth century Irish Patriot, who dedicated his life to upholding the highest principles of political equality and freedom. His commitment to great things makes him an ideal model for us at Owen Roe, for we share his dedication to principle in our work to produce the wines of Owen Roe.

We visited Owen Roe in October of 2018 when we attended the Wine Media Conference in Washington. It was harvest and Wine Yakima Valley had provided a pre-conference tour that included a dinner with a sunset view in front of the Owen Roe winery. Before dinner we had the opportunity to do a vineyard tour with then owner David O’Reilly and I even managed to tour the winery, filled with fermentation bins with David and meet winemaker _____.

You can read more about those adventures:

We visited the Yakima Valley again this summer and did a wonderful tasting with Brandon. Owen Roe sources grapes from both Oregon and Washington, so you will find Oregon Pinot, Washington Reds and white wines from Chardonnay to Gewurztraminer to Oregon Pinot Gris.

There is a bit of news since our visit. Vintage Estates of Santa Rosa California, purchased Owen Roe in September 2019. These are the same peeps that purchased Qupé in Santa Barbara a while back. I’m always a bit of a skeptic when a large company purchases a winery and adds them to their “portfolio”. David O’Reilly stays on directing operations at Owen Roe. He also gets a new title as regional winemaking director for Vintage Wine Estate. So….we shall see.

So… on to the wine we are drinking today!

The first thing that catches your eye is the label. This black and white photography by David K. Brunn, is haunting…I guess a little mystical (hence the name). Here’s what the winery has to say about it:

The image on the front label was captured by photographer David K. Brunn. The ancient Drumlane Abbey in County Cavan, Ireland served as a place of refuge for almost one thousand years until it was destroyed by the forces of Oliver Cromwell. Here the great patriot Owen Roe O’Neill sought solace until he too breathed his last, also at the hands of Cromwell in 1649.

This Cabernet Franc – In the Glass

The color of this Cabernet Franc leans toward Ruby. Deep enough in the glass that while I can see light through it, it is not transparent enough to read through. The nose first hits you with cocoa powder. Another breath finds wet tobacco and brambles. Then you find cooked strawberries, stewed on the stove with maybe a bit of herbs. Finally comes the spice, baking spice and a bit of vanilla.

A sip finds the wine dry. While it smelled hot on the nose right after it was opened, indicating high alcohol, on the palate it is smoother, lighter, feeling medium on tannins, alcohol and body. The acid while not high, it high enough to pair beautifully with food. This feels old world, in it’s lightness. While bigger on the nose, than on the palate, I did get more in the way of black fruit on the palate. We paired this with grilled sausage today, which went nicely.

Cabernet Franc is so underrated! It’s more than just a blending grape..the 3rd in the line of Bordeaux grapes. It is being grown in Virginia, where it is making some luscious juice. We had a terrific one a while ago from Veritas. You find it in California and Oregon (it’s doing great in Southern Oregon…check out the Cab Francs from Leah Jorgensen Cellars, or Quady North. And of course Washington is growing some great Cab Franc in the Yakima Valley! Where ever you find it, it’s worth picking up. I suggest pairing it with a big juicy burger like we did. 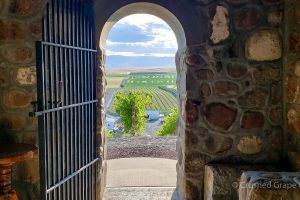 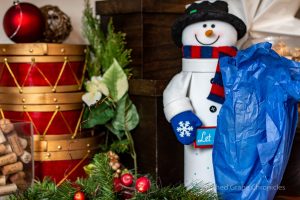 Where in Washington is this winery you ask? Nope, we[...] 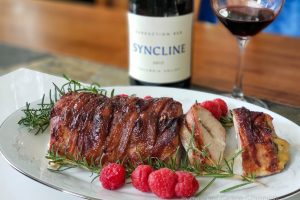 It was a cool summer morning when we visited Syncline. [...]