We’ve all heard of Malbec.  First thought that popped in your head?  Big bold Argentinian Malbec.  Right?  This month with the French Winophiles we are exploring Cahors, France the original home of Malbec.

This region sits in the south west of France about 100 miles east of Bordeaux in the Midi-Pyranees and is divided by the Lot river that does a half a dozen or more “S” curves through the area.  The original home of Malbec, here it is often known as Côt or Auxerrois.   First planted by the Romans, the Englishmen named the wine from this area “The Black Wine of Cahors”.  It is said that if you can see your fingers through the glass, it’s not from Cahors.  At one time widely known throughout the wine world, the 100 years war and later phylloxera dampened it’s growth. 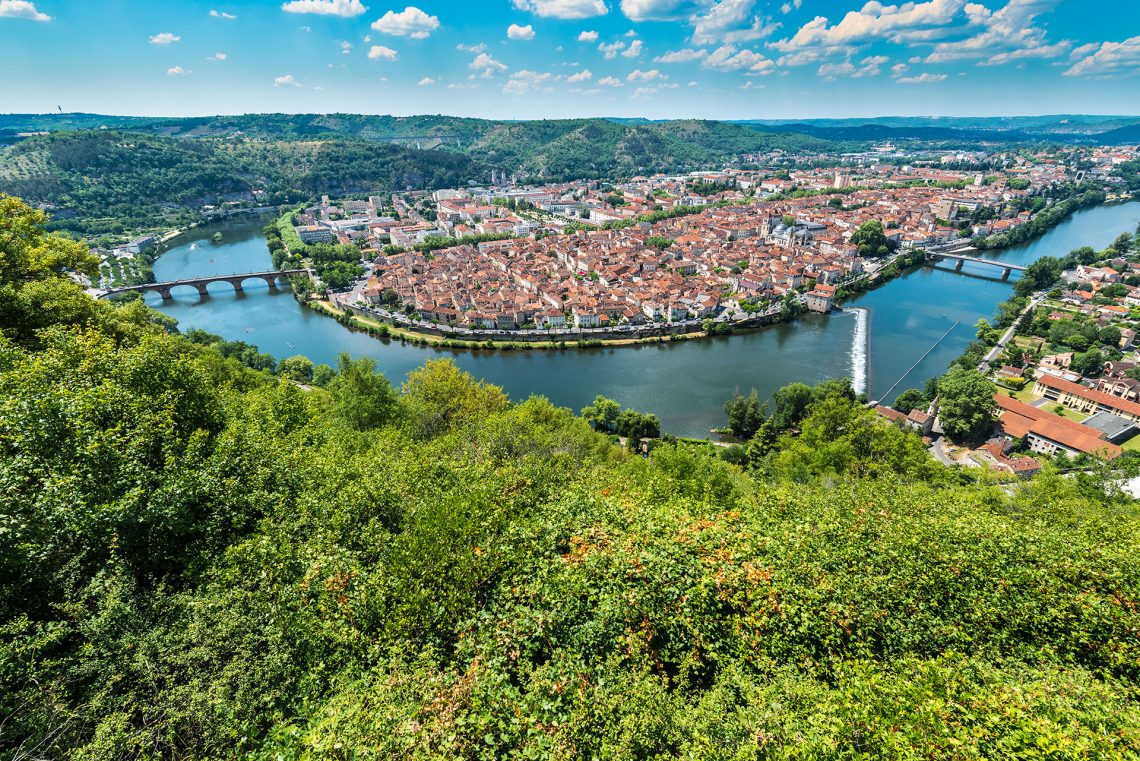 Cahors is also the name of the city at the eastern end of the area that sits on the last of those hairpin turns of the river Lot.  The Pont Valentré has become the symbol of the town.  It is a 14th-century stone arch bridge crossing the Lot River on the west side of Cahors. 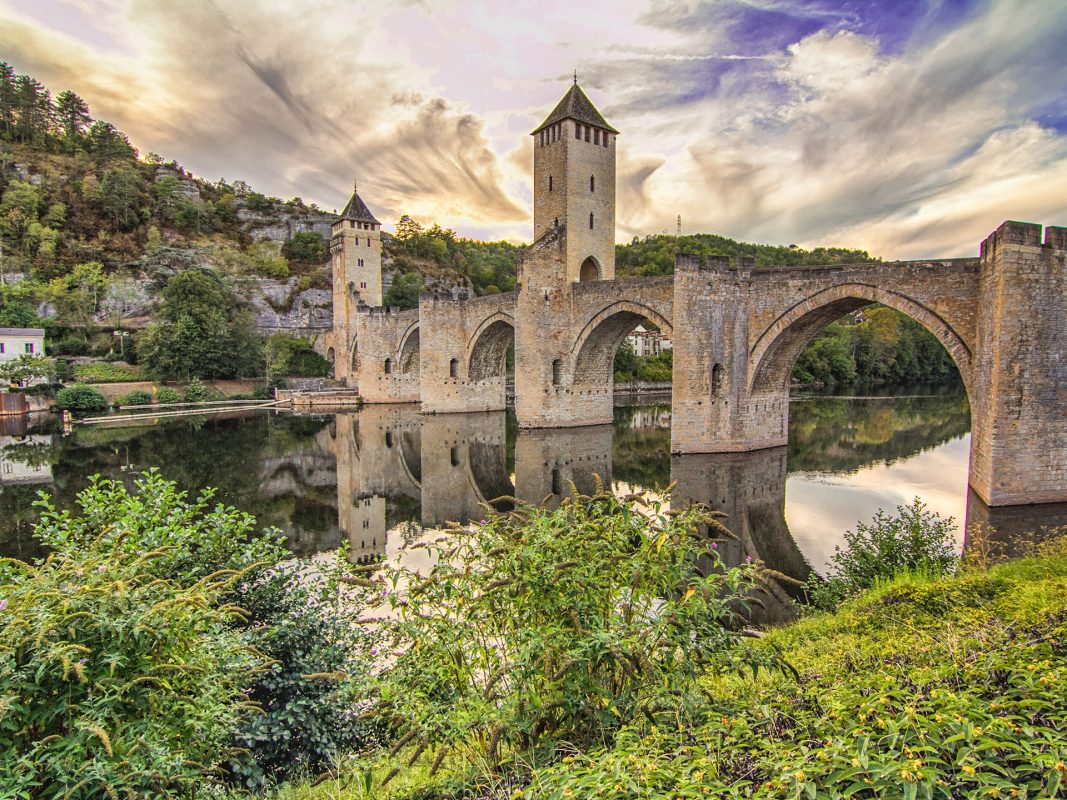 The Pont Valentré in Cahors France

The AOC and the wine region 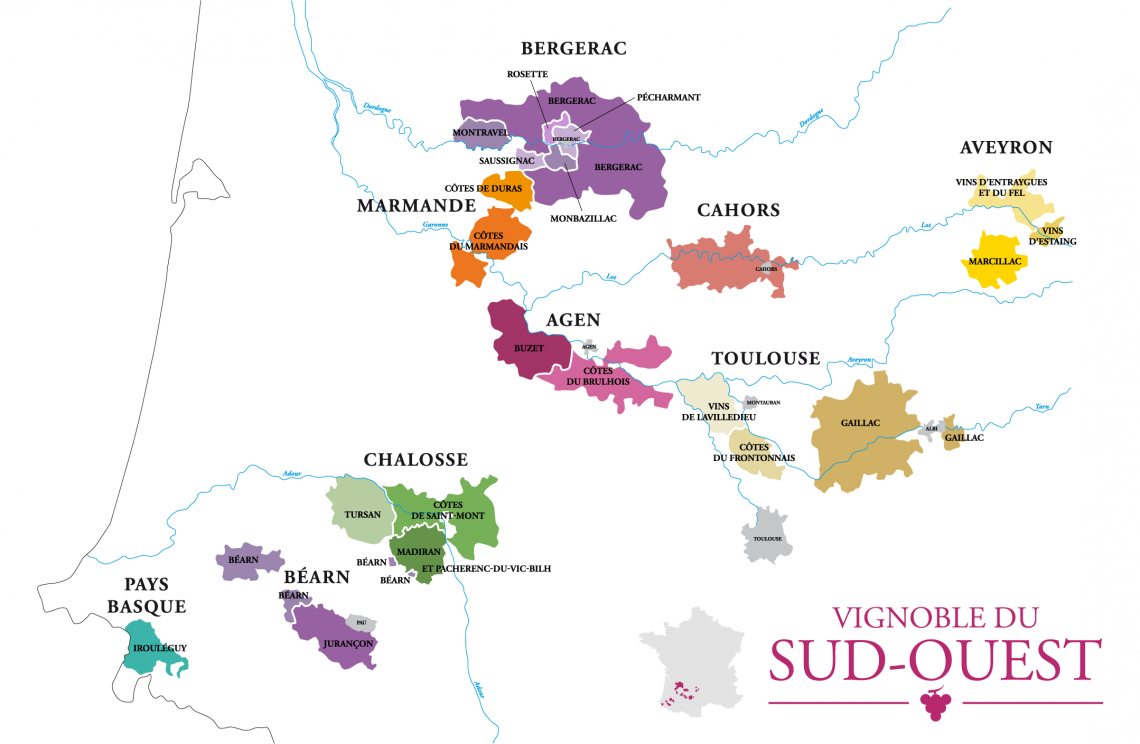 The AOC was founded in 1971 and produces only red wine.  The terroirs here are divided into the Vallée – the valley that runs near the river; the Coteaux – the terraces up the sides of the cliffs and the Plateau, which sits at around 980 feet and has limestone soils.  The wines of the Vallée and Coteaux tend to be more fruit forward, where as the wines from the Plateau have a bit more finesse due to the wide diurnal shifts (day to night temps) which make for slower ripening and a later harvest.

The country side here is out of a storybook with villages perfect for biking, boating on the river and hot air ballooning.  It is also home to many Michelin starred chefs, due in no small part to the abundance of truffles in the region.  The annual truffle festival early each year brings people from far and near to bid on truffles from vendors walking the street. The region is also noted for chestnuts, wild mushrooms, foie gras, goose, duck and walnuts.  All of these things play beautifully with the local wine.

While I was doing that fabulous Grower Champagne tasting last month at Valley Cheese and Wine, I was thinking about this month and our Cahors tasting.  So…before I left, I picked up a bottle of Cahors and a cheese that Kristin suggested to pair with it.  We later picked up two other wines to compare, of the 3 we ended up with 3 different vintages. 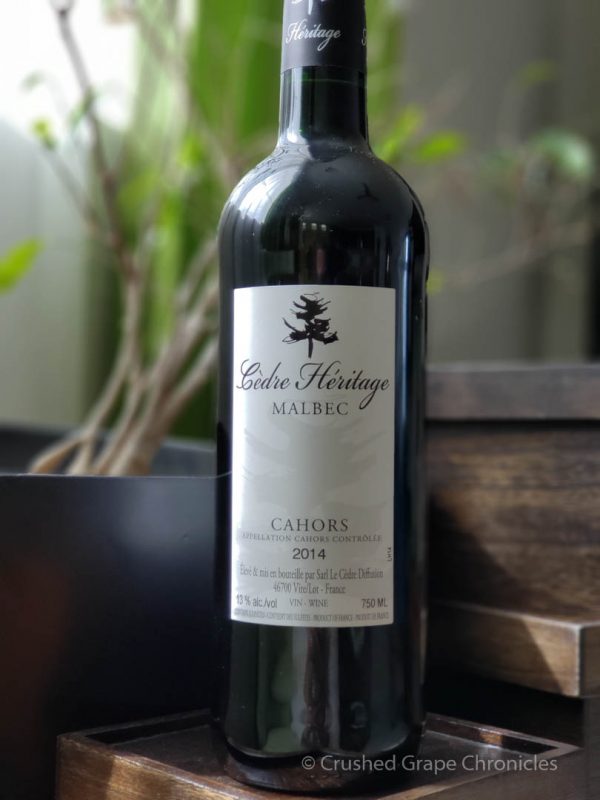 This family estate is run by Pascal and Jean-Marc Verhaeghe.  They have 27 hectares of vienyards growing 90% Malbec with 5% each of Merlot and Tannat.  They do have a little bit of white grapes growning with a hectare of Viognier and then a little bit of Sémillon, Muscadelle and Savignon Blanc.  Vines here are between 10 and 60 years old.

Verhaeghe might not sound French to you.  Well that would be because the name is Flemish.  Charles Verhaeghe started a farm in the area in 1958.  His father Léon had left Flanders for south west France in the early 20th century. They planted some vines and added to the plots each year.  Charles bottled his first wine in 1973.  His sons Jean-Marc and Pascal now run the estate.

The vineyard was certified Organic in 2012.  The vineyard is divided into three parts.  The largest section sits on lime stone soils, it has a southwest orientation and produces wines with very fine tannins.  The other 2 plots face south.  The soil here is red sands and pebbles with clay below.  These wines have a bit more power.

This Maison spans four generations since 1887 with Bertrand-Gabriel Vigouroux now at the helm as winemaker.  In 1971 they replanted Haute-Serre, the first vineyard replanted in Cahors after the phylloxera.  They increased the density of planting to reduce the yield and stress those grapes.  They find that this increases the delicacy of their wines.  They now own around 150 hectares of vineyards and are considered to be the premiere producers of Malbec in the region.  They have 4 wineries and produce a variety of styles of Malbec.

Wine/Agro-tourism is also a focus for Georges Vigouroux.  They have “La Table de Haute-Serre” a restaurant at the Château de Haute-Serre winery and are devoted to promoting the local products that enhance and pair perfectly with the  wine.  They do tours, workshops and cooking classes.  The Château de Mercuès is a luxury Winery Hotel in Occitanie that immerses it’s guests in a high end wine country experience.

We found 2 wines locally from this producer: 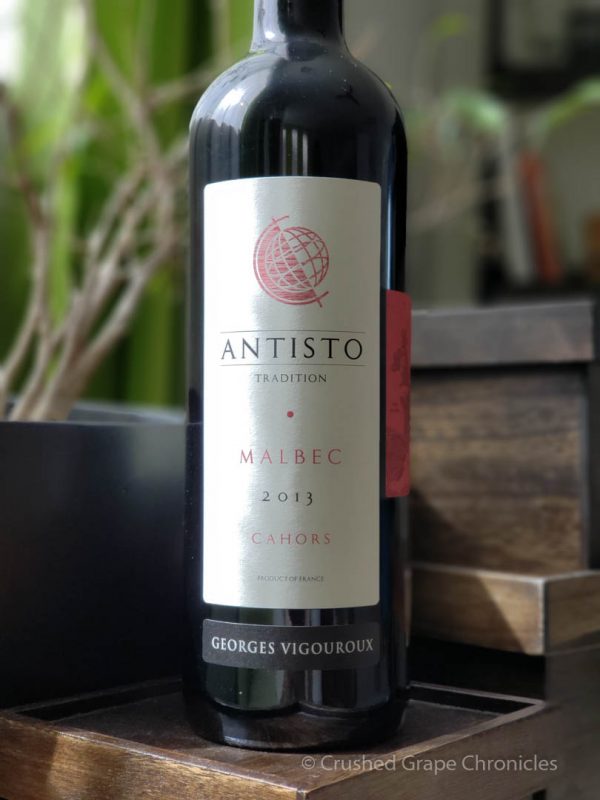 This wine from Georges Vigouroux is 100% Malbec and comes from slope vineyards in Cahors (that would be the Coteaux vineyards we spoke of above).  These are clay-limestone or gravel and silt on terraces overlooking the Lot Valley.  They list the winemaking method as short maceration and long fermentation.  This wine can age for 5-8 years.

They also do an Antisto Mendoza, the idea is to have the ability to compare Malbec from France and Argentina, done in the style of the region. 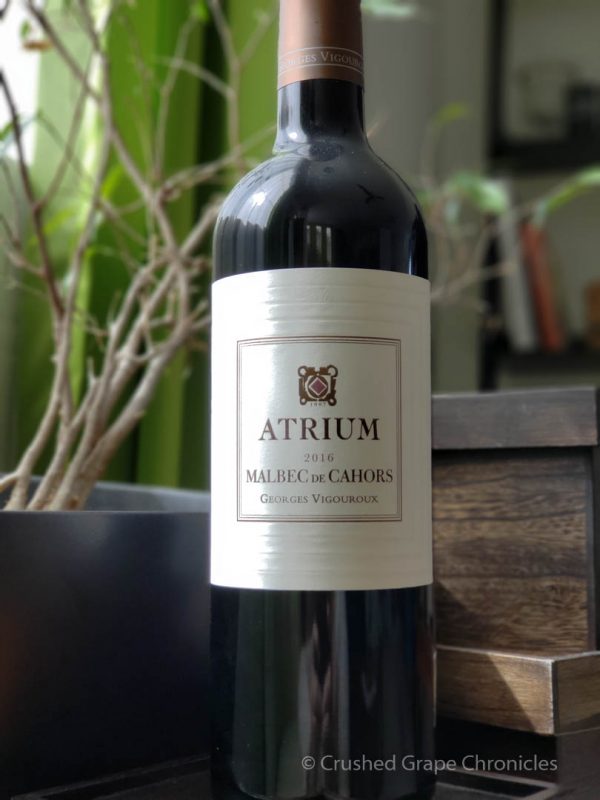 Another wine from Maison Georges Vigouroux.  Their website speaks of the name of this wine in this way

“Place of convergence in the Roman house, the atrium is also the centerpiece of castles, the forecourt of cathedrals … Another theory also suggests that the word atrium is derived from the adjective “ater”, which means “black”: a a haven of choice for Malbec.”

The grapes for this wine are again grown on hillsides.  It is a Cuvée from multiple vineyards and is aged on oak for 6 months.  This wine is a blend, of the region’s 3 main varieties, Malbec, Merlot and Tannat.

The Atrium name is also the overall name for the group of boutique wineries that highlight the wines from Southwest France.  They continue this local focus with wine/agro-tourism, promoting local products that pair perfectly with their wines.

When I picked up the bottle of Cèdre Heritage at Valley Cheese and Wine, I asked Kristen for a recommendation for a good cheese to pair.  She set me up with a raw cows milk cheese from Sequatchie Cove Creamery http://www.sequatchiecovecheese.com/

This is a semi-soft washed rind cheese with a layer of decorative vegetable ash down the center.  This cheese is not a flavor bomb, rather it is comfortable, like the quiet but really interesting person sitting by the window. 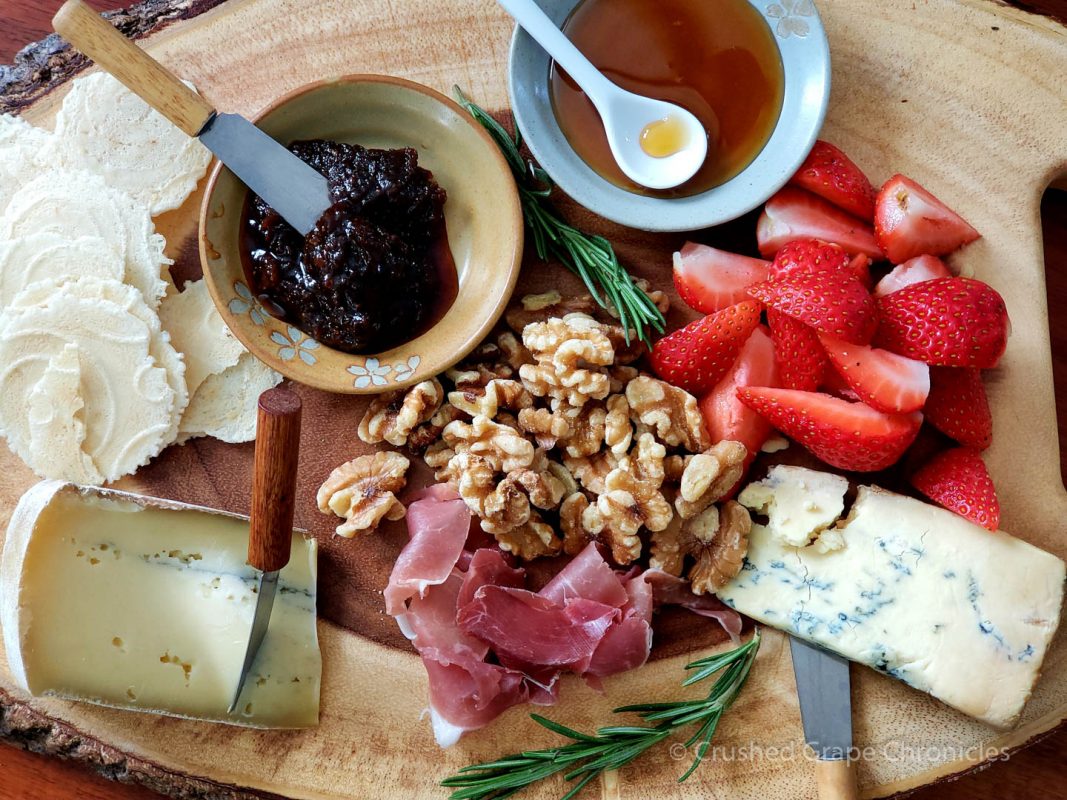 For dinner we paired beef barbeque, herbed potatoes and a salad. 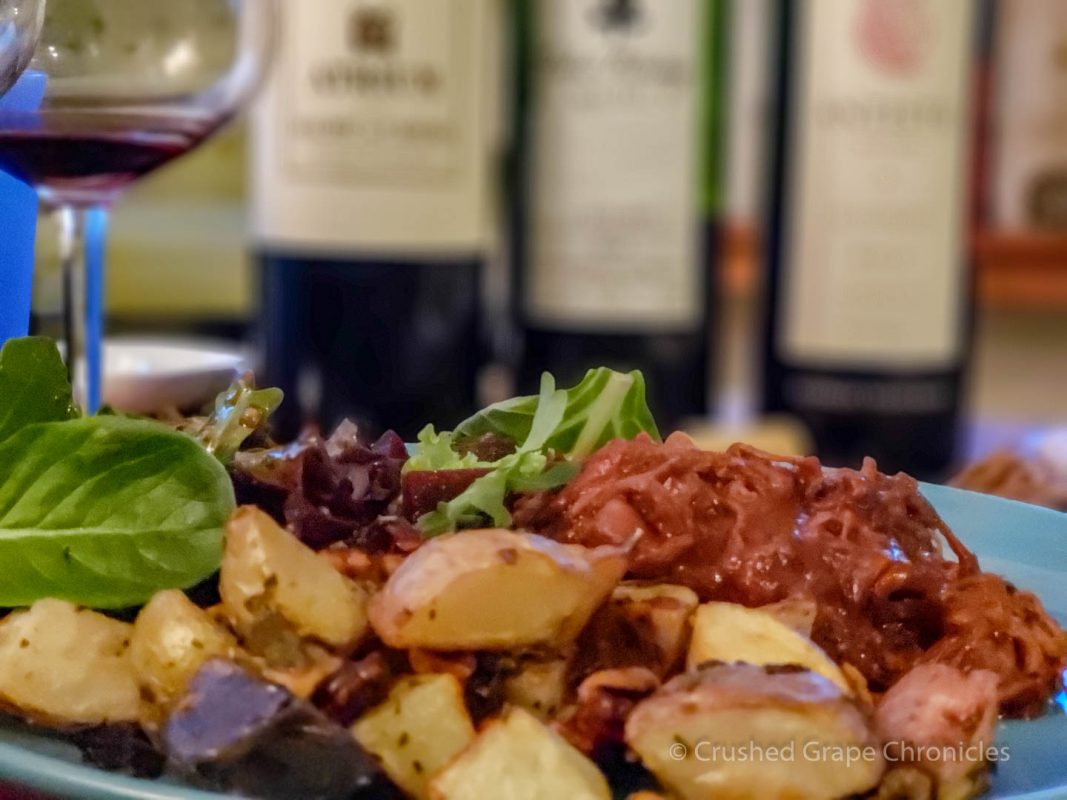 The wines spanned a few years and we tasted them youngest to oldest.

The 2016 Atrium had black plum and tobacco and unsurprisingly, as it was the youngest, seemed the brightest.  I really enjoyed this with the gorgonzola.

The 2014 Cèdre Heritage gave black cherry and ground cinnamon.  It had tart acid and opened up to give off more leather and barnyard.

The 2013 Antisto felt like the most complex on the nose with leather, black plum, fresh eucalyptus leaves.  It was a little less complex on the palate, but I had a hint of black olive that appeared later as it opened.  This went beautifully with the fig jam.

I will admit that all of these wines were purchased for under $20.  I enjoyed them, but didn’t have my socks blown off.  They all disappated fairly quickly on my palate.   I look forward to locating and exploring more wines from Cahors and noting the differences in wine styles and vineyard locations.  Perhaps a Malbec comparison with French and Argentinian wines is in order!

I look forward to hearing about the other Malbecs my fellow French #Winophiles tried, as well as their pairings and finding more wines from this region to search for!

This group of writers monthly take up a French wine or region to taste, pair and discuss!  If you want to join us for the discussion, it will happen on Twitter on Saturday September 15th at 8 am Pacific Time, 11 am Eastern Standard Time.  Just jump on and follow #Winophiles!

Here are the other great pieces on Cahors!

Rob from Odd Bacchus tells the real deal on Cahors: A LOT to Love

Payal from Keep the Peas gives us a bit of everything we want with White Wine, Red Wine, Black Wine, Cahors!

Jill from L’Occasion, will share Cahors: Your Favorite Wine For Fall

Break open a bottle of French Malbec and enjoy a selection of great reads! 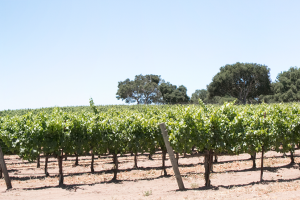 From Dirt to Glass -The Vision, the future of Larner Vineyard & Winery

Michael Larner has been thrown some curve balls as he[...]

Our Rootstock blog will be evolving as we make our[...]

From Paso Robles to Monterey First return trip into the[...]