A bit of afternoon tea and a read inspired by @cul

I've been catching up with some writing Nd spendin

Views from Red Mountain. More of our interview wi 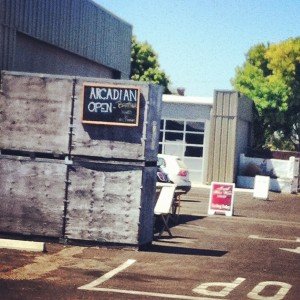 Day 3 in Santa Barbara wine country and breakfast at Sides Hardware and Shoes was in order.  I had a goat cheese and summer squash tart and a latte.  Michael had Challah toast with a blueberry compot.  Once our tummy’s were full, we headed on to the Lompac and the Wine Ghetto!

The drive to Lompac takes you out from Buellton along the 246 and you pass many of the well known Santa Rita vineyards on the way.  Melville, Sea Smoke, Fe Ciega…next time we will take the drive south and stop by Sanford where you have gorgeous views of the vineyards I am told.

I had been reading Steve Heimoff’s book New Classic Winemakers of California so tasting some of Greg Brewer’s wines were on my list.  Greg Brewer and Steve Clifton opened this winery in Lompoc to produce wines that were vineyard specific and to cleanly let the grapes of these vineyards express themselves in the wine.  They exclusively make Chardonnay and Pinot Noir.  We tasted 3 chardonnays and 3 Pinots in their beautiful modern tasting room at their winemaking facility which is outside of the “Wine Ghetto”.  The first wine we tasted was the 2010 Santa Rita Hills Chardonnay which is a blend of Mount Carmel, 3-D, Gnesa, Sea Smoke and Zotovich vineyards they make 2500 cases.  This was followed by the 2010 Sea Smoke Chardonnay.  They are the only winery allowed Chardonnay grapes from this property (you will remember me mentioning earlier that only Foxen is allow access to their Pinot).  This single vineyard Chardonnay they only made 290 cases of.  Lastly we tasted the 2009 Gnesa Chardonnay.  This is a 4 acre vineyard that the Gnesa family planted in 1996.  This was my favorite…lime leaf, lemon curd, cardamom…

On to the Pinots.  The 2010 Santa Rita Hills is a blend of Mount Carmel, 3D, Machado, Ampelos, Zotovich and Sebastiano and they made 1850 cases of this.  The Single vineyards are 2010 Machado of which they produced 288 cases and the 2010 Mount Carmel of which they produced 864 cases. The Machado from a 15 acre parcel on their property and is made of 4 selections that were planted (Merry Edwards, Pommard, Mount Eden and 459).  The Mount Carmel is specifically from the Mount Carmel site and is spicy with dried orange peel, tart fruit like rhubarb and an earthiness.  All of these were beautiful.  One of the things I noticed while tasting was how subtle the tannins were.  I remembered that they believed in full cluster fermentation.  Stems are vital in their opinion to their wines.  Typically this adds tannins and a bit of vegetal quality to the wines and this was not their.  Our pourer explained how it is important to ripen the stem also. They thin leaves not only to ripen fruit, but to ripen the stems.  The result is beautiful.  This was a fascinating stop. I look forward to coming back and tasting at Melville and finding away to taste his diatom Chardonnays.  As to Mr. Clifton…well we are on to Palmina in the Lompoc Wine Ghetto. 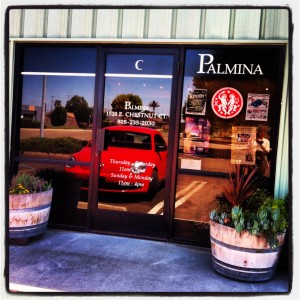 First about the Wine Ghetto.  I understood that it was a group of wineries in an industrial area, all grouped together.  Cool…I pictured large warehouses where they had their tanks and barrels stored for aging.  The warehouses were much smaller than I had pictured.  Truth is crush facilities are typically elsewhere and bottling facilities, probably a truck that comes in when needed.  So the facilities are not that large with the front being the tasting room.  We only had time for one tasting since we needed to get to the airport for our flight home so we opted to try Palmina and taste some of Steve Cliftons wines.  These are a departure from what they are doing at Brewer-Clifton in that these are Italian varieties.  This tasting room was busier and the pourer seemed to be exclusively a pourer as opposed to the pourer at Brewer-Clifton who works at the winery and interrupted what he was doing to come down and help us in the tasting room.  As a result, we tasted but were unable to have the kind of great conversation and get great information as we did a Brewer-Clifton.  We did the traditional tasting and tasted the 2010 Tocai Friulano from the Honea Vineyard, the 2010 Malvasia Bianca from the Larner Vineyard, the 2010 Dolcetto which is a Santa Barbara County blend, the 2009 Alisos (a blend of Sangioves and Merlot) from the Alisos Vineyard and the 2007 Nebbiolo from Santa Barbara County.

Our drive back to Santa Maria took us up the coast a bit and then inland to the airport where the air show continued to entertain us as we enjoyed a mexican lunch before the flight home.  This is a beautiful section of California Wine Country with some amazing vineyards and terroir!