Joyful Noise…it’s the sound of family and friends coming to table, chairs being pulled up or maybe milk crates, scuffling with a cacaphony of conversation, squeels of children being hoisted up onto seats, clanking of dishes as they are passed, the clinking of glasses and laughter.  That is the inspiration for the name of this winery.

“Deven grew up in a large family in one of those places that there was always another chair, whether it was an upside down milk carton type of thing or something they always figured out another chair at the table and it’s that happy chaos Joyful Noise.”  Calli

We had the opportunity to meet Deven & Calli of Joyful Noise at the Uncommon Wine Festival held at Vista Hill Vineyards in July. This great festival features smaller wine producers and is the place to catch up and coming labels in Oregon. 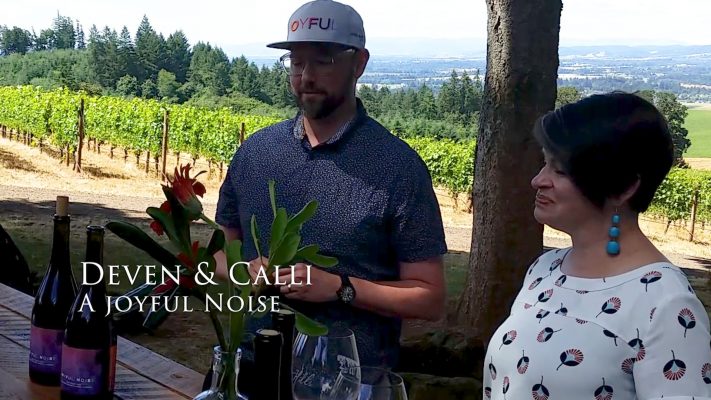 The Journey to Wine Making

Deven says he lucked into wine when he went to school in Eugene and started tasting wines at King Estate.

“right around harvest in 2011 I was looking for something new to do, and everyone I asked for a list of who I should go talk to and who should I try to go work for Rob & Maria Stuart were always on that list.  So I was lucky enough to hop in for harvest worked a couple weeks and decided that’s what I wanted to be.  Got to bounce around a little bit and see some other styles, but as soon as a job at R. Stuarts came back open, I went straight there.” Deven 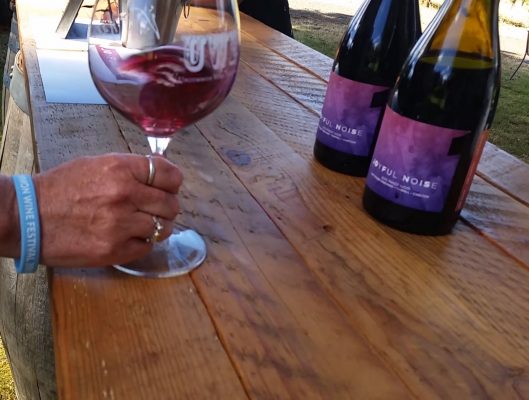 Joyful Noise currently makes just one wine and the 2015 Lazy River Pinot Noir that we were tasting was their second vintage.  They make one ton of Pinot Noir from Lazy River vineyard in the Yamhill-Carlton AVA.  The Vineyard is owned by Ned and Kirsten Lumpkin. (These look like really fun folks, go ahead, visit their website, https://lazyrivervineyard.com/about-us/)

The part of the vineyard that these grapes are growing in is between 450 and 500 feet in elevation.

“This happens to be 100% Wadenswil on 101/14, high elevation of Lazy River, so it’s kind of right at the crest of the hill.  A little band of Jory soil actually goes through vineyard, so not common for Yamhill but part of the makeup.  So really shallow soil, really really dark dark fruit, coming out of the press it almost looks like Syrah it is almost black.  So big big tannins, we try to soften those up a little bit, so de-stemmed into a 1 ton fermenter and punch down a couple times a day.  Wild yeast starts so we make Pied de Cuve* (see explanation at the bottom) at the beginning of the year from vineyard samples.  If we like the fermentation and how it is starting we will pitch that into the fermenter and let it go with that.” Deven

Deven spends his days working for Rob & Maria Stuart of R. Stuart & Co. in McMinnville, and he makes this wine there.  In addition to the Pied de Cuve they also have a cultured yeast strain from R. Stuart & Co.  Four or 5 years ago, they had a wild fermentation that they really liked.  They send it out to a lab in Hood River who broke down the yeast strains into the 3 dominant ones and now yearly cultivate this yeast for them.

“Part way through the fermentation we will délestage the wine so it’s kind of like a rack and return to get some of the seeds out.  We like the tannin but we want the skin tannin more than the seed tannin.  So about 7 brix those seeds start falling out to the bottom so we can basically use like a 3 inch hose almost like a vacuum to pull them off the bottom of the fermenter take the juice away let the juice cool down and put it back.  And then it ages in two neutral French oak barrels and one new French oak barrel.  So 33% new.” Deven

When it comes to barrels, Deven is pretty specific on what he ages his wine in.  The barrels are from Tonnellerie Claude Gillet.  These barrels have a softer tone, so instead of vanilla and bourbon you get more cinnamon and baking spice.  Plus it’s a small family cooper, with people he really likes.  You can see their process on their site at tonnellerie-gillet.com http://www.tonnellerie-gillet.com/our-tradition/index.html

The Lumpkins at Lazy River are getting ready to plant Chardonnay up behind the block of Pinot that Devon pulls from and have pulled out the fir trees that were there last year.   So future vintages will be influenced by a little more breeze and a little more warmth.  It will be interesting to see how the effects on the wine.

When asked what the most important thing about his wine is to him..

“That people have fun and enjoy it. It’s supposed to be drank with friends, have it on the table somewhere, have a dinner party, If it needs to be the excuse for fun and people over than that’s what it should be”


“Basically we take Vineyard samples (clusters of grapes used to test sugar and acid prior to picking) keep them outside the Winery, and allow them to start fermenting.  If we like what we see, that is what gets pitched into the destemmed fruit to start the fermentation.”

Where can you find Joyful Noise?

If you happen into Tina’s in Dundee, you will find it on the bottle list.

Michael and Dawn Stiller and Dwight and Karen McFaddin own and run this classic Dundee restaurant that opened as the first fine dining in the area in 1991. We ate here with friends on our first trip to the area.

And then the Valley Commissary carries two kegs of this wine on tap each year.

Jesse Kincheloe is the chef/owner of Valley Commissary, which is a little lunch and catering spot right in the middle of the granary district parking lot in McMinnville. He grew up in Healdsburg in Sonoma.  They serve Lunch and Brunch leaving nights free for time with family.

You can also read our piece on the Uncommon Wine Festival, with our interview with Dave Pettersen the Winemaker and CEO of Vista Hills who founded the event, and check out other interviews we did at the festival with Ryan Pickens of Esther Glen Farm and Winery , Ariel Eberle of A Cheerful Note Cellars , Jim Fischer and Jenny Mosbacher of Fossil & Fawn, and Alex Neely of Libertine Wines  We look forward to bringing you interviews and discussions with all of the winemakers from this event, as well as details and visits with wineries in each of the Willamette Valley AVAs.  So check back here at Crushed Grape Chronicles  and don’t forget, you can also find us on Facebook, Twitter and Instagram 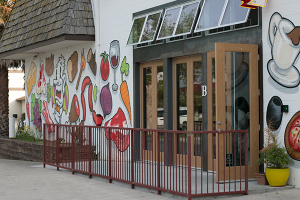 http://youtu.be/imy0wafJKY8 On industrial way in Buellton CA, you might not[...] 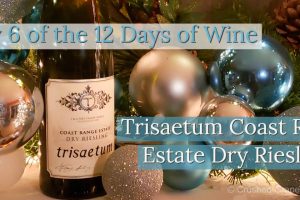 Jump to Recipe We are at the halfway point with[...] 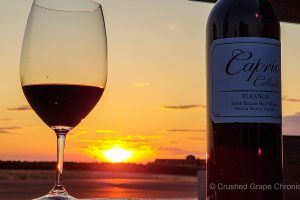