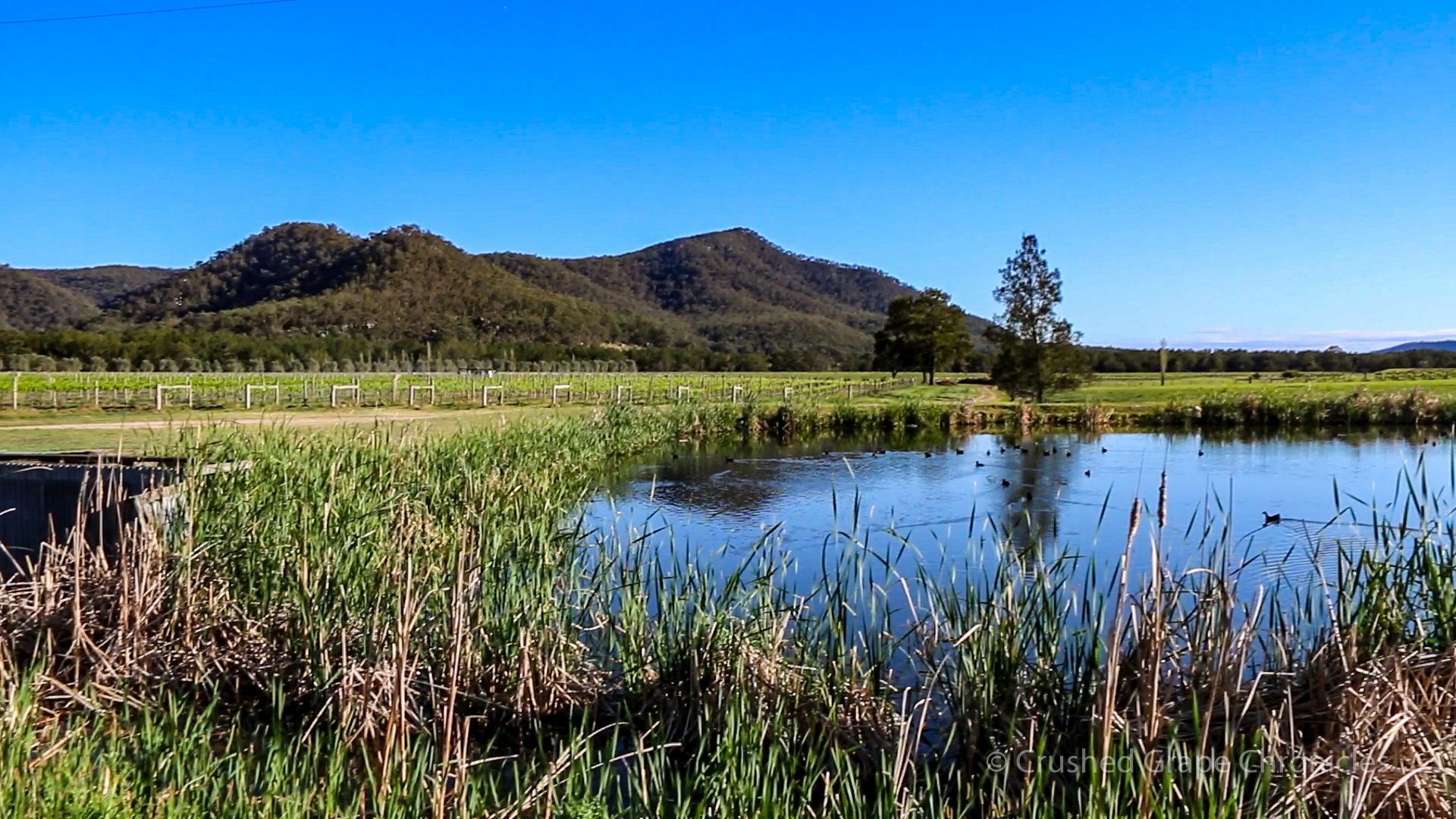 16 Jun Digging into Biodynamic farming with Rod Windrim of Krinklewood

Last October Michael and I visited Australia and while in the Hunter Valley, we visited Krinklewood Vineyard. Rod Windrim the Vigneron, took us on a walk around the property. Rod is using biodynamic farming methods in his vineyard and it was something I really wanted to discuss with him.

When we met him, he gave us a bit of the history of the vineyard. You can read about that here. It also includes a couple of videos from our visit.

Varieties in the vineyard

Rod and I start our wander, heading out into the vineyard and he tells me about the varieties they are growing. This includes Semillon, Chardonnay, Verdelho, Shiraz, Tempranillo and a little bit of Gewurztaminer.  They were growing Mourvedre, but it just wasn’t suited to the site, so they switched to Tempranillo, which does very well.  The Gewurztraminer was added because he really liked adding it to the Verdelho to give it a slightly savory note, and he could not find a place to source it.

They produce some varietal wines and some blends.  Their Wild White is a mix of all of their white grapes.  The Verdelho was Rod’s alternative to Sauvignon Blanc.  Not a fan of “Savy Blanc”, the Verdelho is his answer to a wine that Sauvginon Blanc fans find they like (even if they have trouble pronouncing it.)

With some varieties they must put in a bit of extra work to keep them healthy. With the Tempranillo it is important to keep the canopy open for the breeze to come through, because the big soft Tempranillo leaves are prone to downy mildew. The Semillon, which is so famous for botrytis in Bordeaux, they carefully drop fruit so that none of the bunches are touching. This again, keeps the bunches safe from mildew and disease.

I ask if they use native yeast.  His answer?  They do both native & inoculated.  They create a pied de cuve, which you can kind of think of as a sourdough starter.

“We culture our yeast with … the nicest bunches we can get, put them in small carboys then just leave it out of the sun so you get about 25 degree temp and just monitor it with a hydrometer until it gets down to about 6 baume and then shandy it into the…mix it in gradually.”

Sometimes they have used cultured yeast, when the weather has been uncooperative and they could get good grapes to start the pied de cuve.

The beauty of the site

The vineyard seems like it’s own universe, spread between Yellow Rock (the hills to the East) and Mount Isobel off in the western distance.  Mount Broke and Mount Adams frame Drews Creek that feeds into Wollombi Brook.  There are neighbors, but you don’t feel like there are.

“It’s heaven! I think being surrounded by mountains, it’s lovely.  At night it gets that you can’t see your hand in front of your face.  It’s wonderful for lying on the grass, looking at the stars”

Here I must give a shout out to Willa. She was our constant companion joyfully playing on our wander. She is Rod’s daughter Carla’s dog.

Rod points out the solar panels in front of us.  They have a 15 kw set up here and another 10kw on the other side of the property.

“we don’t want to rave about organics too much.  To me it’s like telling someone you’re honest. The moment someone tells me they’re honest, hmmmm.  We feel a little bit the same way about organic and biodynamic and also getting caught in sort of the thing I hate this “I’m more organic than you and I’m more biodynamic than you and all that.”

But I have asked. This is not marketing or bragging, this is answering the questions I am asking. I like the fact that he is doing this because he believes in it, and does not want it thought of as a marketing ploy.

We pass the sheds with tractors and cultivators, the flow forms and stainless steel tank for making compost teas. There is a patch with buried cow horns and areas for making compost that has fencing so you can see the layers.  These were built back when they did weekend biodynamic classes here with Hamish Mackay.

Influences and sources for biodynamic information

The farming here is just farming biology.  Rod rattles off names; Arden Anderson who was a student of Carey Reams. Both do what is called biological farming. He also mentions Elain Ingham, a microbiologist and Philip Calahan, who got into the frequencies plants put out.  I am grateful we are recording so I can look up there work later (I’ll include links in case you are curious, below). Rod did his research and he is quite well read on the subject.

I learn from him about biological coverage on leaves from compost teas that keep pests from attacking it.  You can check the brix of the sap within the stems of the vines.  If the brix are at 16-18, the plant is healthy and the pests won’t attack it.  Pests, like predators, attack the weak and unhealthy.  This is where Callahan comes in.  He was monitoring the frequencies that plants give out and discovered that when they give out certain frequencies, the pests detect it and come running.

There is a cycle that you might be familiar with, that happens in conventional agriculture.  You add a fertilizer recommended from a company, nitrogen perhaps.  The plants start growing fast.  They send out all this soft new tissue and that attracts the pest who come to eat it.  Then of course the company recommends a pesticide to kill off those pests.  It’s a vicious circle.  It’s also about quantity over quality.  Add the fertilizer and you get bigger plants, bigger crop, but with less nutritional density.

Natural innovation to save a vintage

I ask about the pressures of summer rains when using biodynamic farming methods.  Most of the regions we have seen using these practices are blessed with dry summers.  Rod gets excited here.  He has a story for me.

“We started using biodynamic preparations here in 2002.  We got to 2008 and local contractors and colleges, when we said we’d survived another year, they were like “yeah, but it’s a fucking drought”. 2008 came and it pissed down raining the whole vintage.  We had downy starting to break out.  Lawson, that worked for me at the time was really awesome.  We’d met up with some guys in the cotton industry that were heading toward organic.  This guy was breeding a geni of fungi that predated on downy spores. So we got some and made a compost tea, we bred the numbers up and sprayed this out.  We survived the vintage with downy and picked every grape on the property.”

Downy spores are white on the underside of the leaf.  The tea turned them a rusty red color.  They hadn’t wanted to give up on biodynamics after working so hard for so many years.

“This wine writer rang me in March after vintage and asked how the vintage was.  I said it was pretty tough.  He said, so what do you mean?  I said it pissed down rain, we got downy breakout.  So he said you are going back to…I said No Way!  We are convinced now, we can actually wave the flag, we’re biodynamic, cause we survived!”

We walk around the back and he points out the Verdelho, the Shiraz, the Gewurz, Chard and Semillon that is next to the creek.

I ask about water and Rod says they have a dam and then drip feed. Here you have to irrigate or the vines would not survive.  But they only irrigate to keep the biology healthy and breeding.  They use the system to place biological food for the vines, like fish emulsion, kelp and molasses.

Soils here are sandy loam, which are great for white grapes, not so great for red.  Red wines want those rich red volcanic soils to make powerful reds like those in McClaren Vale and the Barossa Valley.  Here the reds are more akin to a big Pinot Noir.

At that point the tractor pulling a sprayer comes toward us.  This sprayer has a recovery unit on it.  This early in the year there is not as much foliage, so there is a cover on both sides to recover about 80% of what they are spraying. This keeps the spray from being wasted in the air or on the ground.

We spent quite a bit of time with Rod, so check back with us as we continue our walk and get into the winery for a bit of barrel tasting.

It’s worth saying that a biodynamic approach can help you through drought, it can help with the health of your vineyard, but there are some things that are beyond the help of biodynamics. Australia and the Hunter Valley were hit with major fires this year. Krinklewood, like so many vineyards in the Hunter, lost an entire vintage to smoke taint. Rod tells me they tested and after getting the results, they did not harvest. After that, they were hit by COVID-19, having their cellar door again closed down.

They have been able to reopen their cellar door, which is an amazing place to get away, enjoy the country, watch the peacocks (who roam and preen), and enjoy some amazing wine. I encourage you to go visit. It will do your soul good. You can taste and see for yourself the difference using a biodynamic approach can make in a wine. The wines here are really spectacular. Make sure you have room in the car to take some home.

Be sure to call ahead and set an appointment. They are appointment only on Fridays, Saturdays and Sundays, for the moment. Pre-book your tasting by calling 0265791322 or via email [email protected].

If you see Rod, please tell him I say hello.

If you, like me, are fascinated with biodynamics and want to learn more, here is a list of the authors that Rod mentioned.

Krinklewood also has a page devoted on their site to their story with biodynamics that is well worth a read! https://www.krinklewood.com/biodynamics/

One other book, that I really need to pick up and read is The Future Makers -Australian wines for the 21s Century by Max Allen. I met Max at the Wine Media Conference. In his book, he looks at Australian winemakers and vineyard owners, and the directions the wine industry will need to take to combat global warming. He spent some time speaking with Rod about Biodynamics.

My last bottle of Picpoul from Bonny Doon in the c

Remember that South African rosé I opened the oth