Exploring the Kingdom of Aragon and its wines #WorldWineTravel

Exploring the Kingdom of Aragon and its wines #WorldWineTravel

The Kingdom of Aragon, that’s quite a starting point.  It springs from Navarre when Sancho III left his third son the small country of Aragon.  The kingdom grew and grew expanding into Catalunya through marriage and into Valencia through conquering. At one point they ruled Sicily.

Today the Aragon region is in North-East Spain.  It is smaller than it once was and now is an autonomous community within Spain, rather than its own kingdom. Its eastern border is Catalunya and Valencia, which keep it from touching the Mediterranean Sea.  To the North is France and the Pyrenees.  To the West Castilla y Leon and Navarra.

Landlocked and large this region spans from the foothills of the Pyrenees where temperatures can dip below zero to the Monegros desert and the climate throughout the region can be dramatically different.

It is reported that settlers were cultivating grapes in the Ebro Valley in 500BC, so winemaking in this region goes back a bit historically.

This month the World Wine Travel group is exploring this region virtually.  You can scroll to the bottom to read my colleagues’ pieces.

If you want to learn more about the region or have a favorite producer or DO, come join us on Saturday, May 22nd on Twitter!  You can join the conversation by using the #hashtag #WorldWineTravel at 8 am Pacific time (11 am Eastern time).

Designations of Origin in Aragon

There are 4 DOs (Designations of Origin) in Aragon.

Somontano means “at the foot of the mountain” and that is where this area sits, at the foot of the Pyrenees in the northeast part of Aragon.  Wine has been produced here since the Romans.  Monks took up the caretaking of the vines in the middle ages.

This DO was approved in 1984.  It is well recognized in Spain for high-quality wines.  The region has over 4,000 hectares under vine with altitudes ranging from 350 to 1,000 meters.

For more information on the DO Somontano visit D.O.P. Somontano

This small district in the northeast province of Zaragoza focuses on Garnacha.  They call themselves “The Empire of Garnacha” with 5000 hectares of Garnacha planted. Some of the Garnacha vineyards here are said to date back to 1145, although the Foods and Wines of Spain site only date the oldest vineyards to 1890.

The region sits in the northwest part of Aragon and shares a bit of border with Navarre.

Vineyards here sit at between 350-750 meters and are broken into 3 areas.  The Northeast region is low with elevations of 350-450 meters and the wines are notably aromatic.  The middle area is higher at 450-550 meters, making wines that are complex and structured.  The third area is the Southwest portion of the region and has the highest vineyards sitting between 550 and 700 meters in the foothills of the Moncayo mountain.  Wines here are subtle and elegant.

You can learn more at the DO Campo de Borja site.

The name was originally Carae and was a Roman city.  The DO here was established in 1932. This is the oldest and largest of the DOs in Aragon.  It gave its name to the grape here “cariñena” which is known as Carignan in France and Mazuelo elsewhere in Spain.

Vineyards sit between 400 and 800 meters in elevation.  There is quite a bit to this DO I invite you to visit the DO Cariñena site for much more information.

The last DO we will speak about is Calatayud, because these wines are the most accessible and were the wines I was able to easily locate to taste.

The region contains the cities of Calatayud and Maluenda the Jalón river and its tributary the Jiloca River flow through the region.  It brushes the border with  Castilla y Leon to the west and comes close to the Castilla – La Mancha border to the southwest.

Vines have been cultivated here since the 2nd century BC.  The ancient city of Augusta Bilbilis flourished here and the Moors founded the city of Calatayud in the nearby area.  Wine cellars in the region are over 250 years old.

Garnacha is again the focus here.  There are two main types of soils that produce different styles of wine. The slate and quartzite of the Cambrian period make wines with spice and mineral notes. The clay soils of the Miocene period produce more fruit-forward wines.  You can find more details on the Calatayud site.  The region has a very dramatic video that they share on the site that is worth checking out.

I found several wines from this region easily.  Wines from the other regions, I would have had to ship in, and time was not on my side.  So I will wait to explore wines from Somontano and Campo de Borja and Cariñena another day.

In the meantime I found two wines from DO Calatayud to try, both were extremely affordable at under $15 each.

This wine is produced by Bodega San Gregorio, a co-op founded in 1965, located north of the city of Calatayud in the Ribota River Valley.

This co-op was founded in 1965 in Cervera de la Cañada in the foothills of the Iberian Mountains.  They have vineyards in the Ribota and Manubles valleys, in the west of the Calatayud appellation. Their 700 hectares of vineyards surround the Sierra de Armantes.

” The cultivation of the vine in the area dates back to at least the second century BC, documented after the discovery of a press in the Celtíbero de Segeda site, located between the municipalities of Belmonte de Gracián and Mara, just 20 km from Cervera. The first written reference to the high quality of the area’s wines dates back to the 1st century and its author is Marco Valerio Marcial, a satirical writer who was born in Bílbilis Augusta, a Roman city located near Calatayud. In the 12th century, the Cistercian monks founded the Stone Monastery, and increased the vine planting in the area.”

This wine the Tres Ojos “Three eyes” is named for the ancient walking bridge in the city of Calatayud. (close up label shot)

85% Old Vine Garnacha and 15% tempranillo the vines are between 40 and 50 years old. It is whole berry fermented which is typical for the region. It ferments at a warm 30° C for 7 days, then 14 days of skin maceration (which gives it a deep ruby color.  It ages 12 months in Stainless Steel before being lightly filtered and bottled.

For me, it had a full nose of Blackberry, raspberry, black cherry, and bramble with some black pepper. This wine is big at 15.5%.

This wine is made by Bodega Juan Gil.  In 1916 Juan Gil Gimenez built his first winery in Jumilla.  The company is now run by the 4th generation and it has expanded to 11 family wineries in 10 appellations. They export to 50 different countries.

The bottle has a story on the back label

“Pepe Sáez, after a lifetime dedicated to the care of vineyards throughout the Spanish geography, decided to undertake his most ambitious project: the selection of the most special vineyards from “emerging” regions and native grape varieties to create a range of wines with a character unique and an unbeatable value for money, capable of satisfying the taste of the most demanding consumers.

“Intruso” is the name chosen for such a special project, born without prejudice, with the illusion of challenging the status quo and the sole objective of allowing the consumer to taste the fruit of the best vineyards.

Intruso is the affectionate nickname to call Pepe Sáez, meaning the outsider in Spanish.”

We enjoyed the wine.  But I will say, I could not find this vintage online anywhere except Total Wine.  I tried looking this up on the Bodega Juan Gil site to no avail.  It is imported by Saranty Imports, which seems to bring in quite a bit for Total Wine, so perhaps this is a private bottling.

The wine itself had a bit of wet hay on the nose for me and I had to dig to find the fruit.  Michael had a different experience and enjoyed the fruit forwardness of the wine.  My glass eventually opened up for me with notes of black cherry and black plum.  This wine sits at a little more reasonable 14.5 % abv and you could tell the difference. This is 100% Garnacha and ran $12.99.

Pairing with Spanish meats and cheeses

These wines were both very deeply colored and flavored wines.  They were big, not deep, and will pair well with friends and conversation.  We paired ours with Spanish cheeses; Iberico, Cabra al Vino, and Manchego and meats; Salchichon, Del Duca Jamón Serrano and Chorizo Cantimpalo plus heirloom tomato slices, Red pepper slices, blackberries, raspberries, truffled Marcona almonds, olives, and black cherries.

My colleagues at World Wine Travel have been visiting Aragon virtually also and I am sure discovered many more wines!  I can’t wait to see what they tasted. 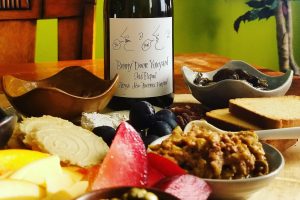 While on the Central Coast we made the pilgrimage to[...] 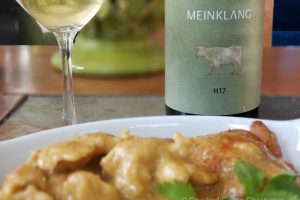 Chicken Paprikas This recipe is based on my Mother’s.  She[...] 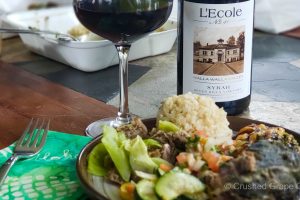