We’ve all had wines that we didn’t like. Perhaps it smelled a little funny, or was just bland. Sometimes, that’s a wine that is just not for us, or is poorly made, but sometimes it is the result of faults in wine.

Now wine faults can arise from poor wine making, but they can also come from sources that are out, or at least somewhat out, of the control of the winemaker. We will dive into a few of these in this post.

We discussed the chemical makeup of wine in the last post. Some of those chemical reactions we mentioned can happen at a level that is not so good in wine.

Sulfur is often used in wine making to preserve the wine. Adding sulfur keeps wine from oxidizing and it’s rare for a wine to be completely sulfur free. Even when sulfur isn’t added small bits are produced during the fermentation process.

A little sulfur is not typically an issue, but… if there is too much, or if it starts to combine with other chemicals in the wine, it can get stinky.

Hydrogen sulfide (H2S) is that rotten egg smell that you might smell at a volcano or a swamp. If you have lots of sulfur in a wine and then it sits without oxygen you can get this smell. It can happen with screw caps where there is no oxygen exchange like you get with corks or if you are aging on the lees or yeast too long.

Matches tipped with sulfur, when struck combine with the oxygen and you get that burnt match smell. In wine, you might smell this if there is too much sulfur or you might just notice it as a burning sensation in your throat. The way that you notice this is connected to the acidity of the wine. The more acid, the more SO2 you will notice.

We know that the alcohol in wine is ethanol. Well, ethanol can combine with sulfur to create “ethyl mercaptan”. This is the odor that they add to natural gas so you can smell a gas leak. I know, we said that hydrogen sulfide it the rotten egg smell, and if you are like me, that’s the smell I associate with natural gas. While I hope I do not have occasion to smell a natural gas leak, that is “ethyl mercaptan” which smells like garlic or onions. And sadly for winemakers, if you get ethyl mercaptan in your wine, there is very little you can do to fix it.

We’ve all heard of corked wines. Perhaps you thought that was the reason that at restaurants they will hand you the cork? (It’s not, actually, they show you the cork to prove the wine is from the winery. There have been times when scandalous tricksters would re-bottle a cheap wine in a fancy bottle and try to pass it off as the higher end wine. The cork, if the wine was legit, would be stamped with the winery name.)

TCA is a mold. It actually has a much longer name: 2, 4, 6 Trichloroanisole. It is typically shortened to TCA for obvious reasons. While we think of it as “cork taint”, and indeed it can grow on cork trees, it can also grow in boxes, barrels or even winery walls. Once it gets in, it’s tough to get out. If it gets into a winery it can be transferred into the wine.

TCA can smell like a dark, dank, musty basement, or in lighter cases might just make a wine bland or muted. It’s not harmful, luckily and cases have decreased. The estimates on wines affected by TCA vary pretty dramatically from 1% to 8% of bottles. Distributors will typically refund clients for corked wines and at the table, if a customer says a wine is corked, it is unlikely that the restaurant will argue. Hence the differences in estimates.

So most bacteria can’t survive in wine. I mean, that’s how wine got started right? Water wasn’t always safe, but fermented beverages with their high alcohol killed off most bacteria.

Well there are a couple of bacteria that can survive in wine, one we like much of the time but the other….

Beyond that, when ethyl acetate and acetic acid combine it’s called ascensence.

This bacteria is sometimes useful! Malolactic fermentation is often used to round a wine and make it less acidic. Malic acid is often found in cool climate grapes or under-ripe grapes and is like tart green apple. Lactic bacteria eat the malic acid and produce lactic acid, which is much rounder in your mouth and less acidic. It can also produce a buttery aroma.

Too much of a good thing and you get more lactic acid than you want which smells like sauerkraut. You can also get butyric acid which smells like rancid butter. Butyric acid can come from an over-vigorous malolactic fermentation, or it might be from a bacteria before pressing.

There is also the smell of crushed geranium leaves that is either caused by an incomplete malolactic fermentation or if sorbic acid has been used as a preservative, it can be from an improper breakdown of that.

There are other stinky things caused by stuff in wine. (There, that’s scientific isn’t it!?) Some of these things people like in small portions and sometimes the style of wine means that you will create one of these situations. Let’s start with those first.

Oxygen will dissolve into wine and when it reacts with the phenolic compounds (from the skins) it creates acetaldehyde, which smells like caramel or nuts and can cause browning. Some liken the smell to jackfruit (yuk) or bruised beat up apples. Oxidation can cause a wine to lose most of it’s fruit character. However…they use oxidation to make fino Sherry. So in that case, it’s a plus!

A step beyond oxidation is maderization. You might recognize the word from Madeira. This is what happens when a wine is exposed to lots of heat or oxygen. You get a cooked or baked odor. When you get this in Madeira, it’s on purpose. When you get this from the wine you left in the back seat of your car that you parked outside in a parking lot in the Vegas sun…not so much. So generally this is considered a fault.

This one is tricky. Brett (it’s nickname) is a wild yeast. It shows up in wineries and can smell sweaty or horsey and will ferment right alongside the wine yeast.. Some people like a little brett, (I do). It gives that barnyard smell to red wines. Some people believe it to be a fault regardless of the level. It can smell medicinal or like band-aids or it might just deaden the flavors in the wine.

Sometimes this is called Light Strike. This happens in light white wines if they are exposed to light or UV rays. It will make the wine smell like wet wool. (don’t store your wine near a window!)

Other smells and causes

All in all if you get a bottle of wine and you think it has a fault, you should send it back. Too often people get a faulted wine, and will write off the region or the type of wine, thinking they don’t like the region. If you know these faults, you can tell the cause and distinguish from from the region or area. It would be horrible to write off an entire region over one bad bottle!

We will be continuing our series of educational posts on wine in all it’s complexity! Join us to explore and learn more about this fantastic and fascinating liquid. 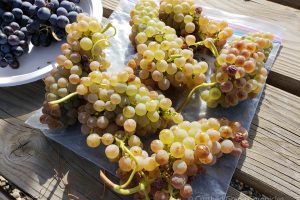 The chemistry of wine

Wine. It’s simply crushed and fermented grapes.Yep, that was me.[...]