While enjoying our afternoon, tasting the wines and getting set for Flavor Camp, I peeked around the side of the winery, where work continued.  We were deep into harvest and cleanup was happening outside the winery, behind where the tables were set out for dinner and wine was being poured.  I always lean toward the backstage (I am a Stage Manager after all), so I snuck around the side and found a couple fellow wine writers peeking as well.  As luck would have it, David O’Reilly, owner of Owen Roe, had spied us, and offered to give us a tour inside the busy working winery.

The Winery was full of bins filled with fruit that was fermenting.  Pulling back the tarp, that was spring clamped on as a lid, we looked in at the berries (grapes) that looked remarkably like blueberries (as someone noted).

David informed us that this was a whole berry ferment.  They don’t use a crusher to crush the berries, the weight of the berries pressing down on each other does that work for them.

The room was filled with these white bins full of berries fermenting.  Someone asked if this was like a carbonic ferment.  Well….carbonic fermentation (as David explained) is a whole berry fermentation like this, but….it is done in an enclosed system with CO2. They do this with the Cinsault that goes into their Sinister Hand Blend. He pointed out the room in the corner, their cold room. The carbonic masceration, does with the Cinsault, what is does with Beaujolais Nouveau, it give the wine a fresh fruit note.

You know I love a good story. While David O’Reilly told us the tales of the winery and the vineyard, I dug a little deeper to find the inspiration for the name of the Winery and beyond that, of the Sinister Hand wine that David mentioned to us and that I got to taste later.

Behind the Name Owen Roe:

Owen Roe O’Neill was a seventeenth century Irish Patriot, who dedicated his life to upholding the highest principles of political equality and freedom. His commitment to great things makes him an ideal model for us at Owen Roe, for we share his dedication to principle in our work to produce the wines of Owen Roe. At Owen Roe we do not compromise: only the best is good enough.

I reached out to Taylor at Owen Roe and she told me that David O’Reilly had spent his first 14 years of life on a farm in Ireland. His family then moved to British Columbia and he fished and raised vegetables and grew up living off of the land.

The name on the Label

A letter written in 1649 by O’Neill was found in David O’Reilly’s family castle, but because the letter was written in Spanish, O’Neill penned the signature with his Spanish name. David cut out the letters from the document to create Owen O’Neill’s signature. O’Reilly is related to O’Neill through marriage.

The story of the Sinister Hand

THE STORY BEHIND THE LABEL: Long ago, pre-dating the 11th century, the families that became modern day O’Neills and O’Reillys were feuding over the land that became their ancestral home. To settle the dispute, a competition was organized and several rowing teams agreed that the first to touch the land, after rowing across the lake, would become ruler of the land. O’Neill’s boat was falling behind so a member of the crew grabbed his own sword, cut off his hand and threw it ashore, and touching first, winning the title to rule the land.  The island fortress on this land can still be visited on Lough Oughter in County Cavan.

David opened up a bin that was about half way through its ferment.  You could feel the heat.  The bin was sitting at about 32 ° C that would be about 85 ° F.  David explained that with Interns in the winery from all over the world, they use celsius temperature and metrics here (easier than teaching another language!).

We looked in another bin and you could see some skin separation. The color was also leaching out of the skins into the juice adding those wonderful phenolics that make red wines so tasty and interesting.

We met Jackie Evans, the winemaker here at Owen Roe, as she was making her rounds adding nutrients to keep the fermentations on track.  They had their lab where they check levels and add nutrients to be sure the fermentation does not get stressed.  This avoids stuck fermentations.  As David puts it “Band-aids are easier than mouth to mouth resuscitation.”

Later in the evening the crew would be in for punch downs.  I had planned on trying to get back in to see that, but the wine, the food, the conversation, and that sunset…well, suffice to say, I got distracted.

None the less, we did go on to do our Flavor Camp which included a vineyard tour with David.  You will see that coming up next!

Owen Roe has 2 tasting rooms, one in Washington at the Union Gap Vineyard that we visited, as well as another in Newberg Oregon (they make wines in the Willamette Valley also)

Watch for our vineyard tour with David O’Reilly, coming out soon! 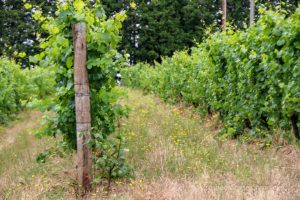 In our conversation with Rudy Marchesi of Montinore Estates, we[...] 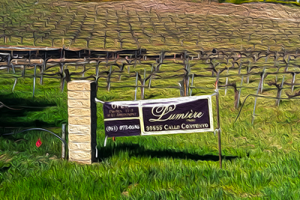 The Vineyards at Lumiere Winery

Continuing on with our Wine country adventures, About a year[...] 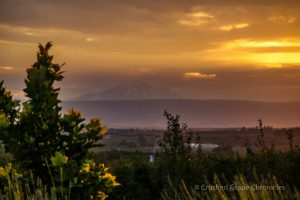 We had an opportunity this past fall to travel to[...]