a celebration or festival

from the Old French feste and the Middle English feast.

You could smell the smoke from the grill and the portable wood fired pizza oven followed by the aroma of things set to make your mouth water. The buildings remind you of a small western town, with the barn looming in the center, filled with tables, each with it’s own winemaker, each serving a wine they created from grapes grown at this vineyard.

The beautiful Larner Vineyard Grounds and barn make an enchanting and welcoming place for an event like this.

Click below to dive into the visuals of the event or scroll down below it to read the rest of the story!

Sonja Magdevski of Casa Dumetz pulls Grenache from Larner. She brought a 2014 Larner Grenache, and then a 2014 Grenache that is blended from 5 vineyards, all in Ballard Canyon (including Larner). All the grapes were picked on the same day, did a 5 day cold soak, were treated the same and then blended. She also had a GSM made with Larner Grenache.

McPrice “Mac” Myers began winemaking in the Santa Maria Valley. When he moved his winery to Paso Robles (he’s in the Adelaida AVA now) he still felt the pull of the fruit in Santa Barbara.

“Hommage a Stevan Larner” was first introduced in 2006 to honor Stevan Larner who planted Larner Vineyard in 1998. 2012 marked the tenth year Mac purchased fruit from the vineyard and he brought back Hommage a Stevan Larner to commemorate this. Mac will continue to produce this wonderful blend every vintage going forth. This is a Grenache Syrah blend. He also does a Larner Syrah.

Scott Sampler is exploring extended mascerations. His winery is in the Buellton Bodegas that Michael Larner founded, and is called the Central Coast Group Project. He feels that his wines are not produced by only him, rather it is a group effort with all the people from growers to all the people involved in helping to get the fruit in, the wine made and beyond.

“at the Central Coast Group Project (CCGP), the goal is simple: we hope our love of wine, generosity of spirit and humble efforts in the cellar fully translate to your glass, transporting you, if only for a sip, to the golden age… scott sampler, winemaker/proprietor”

Mikael Sigouin of Kaena has been pulling fruit from Larner since the beginning. He is known as the “Grenache King” and the fruit from this vineyard is his favorite.

It is incredibly hard to get into the Grenache blocks at Larner and Mikael shared with us the story of how he managed to get the “Primo” block.

It seems that in the hecticness of harvest, someone accidentally picked his block. He got there and all the fruit was gone. The Larners were devasted about this mistake and asked what they could do to make it up to him. He asked for their best Grenache block in the future and so it has been ever since.

This block is located at the highest and steepest section of this amazing site, where the soil is a 7-foot deep bed of sand and then the vines hit limestone. It has the lowest yielding clone of Grenache #362. Great fruit, makes great wine.

Larry Schaffer of tercero was pouring and speaking passionately about wine. Again, he was pouring wines made from Larner grapes. He has a stunning 2011 Grenache from Larner that he says is the best Grenache he has made to date. 2011 was a cool year and these grapes were ripening into November. He only produced 3 barrels of this amazing stuff and we were thrilled to be able to taste it.

Oh, and do you see that loaf of bread in front of Larry? Yeah, he bakes too. If you are lucky he might be in his tasting room with a loaf when you drop by.

Larry is a champion of Rhones and leads the Santa Barbara Rhone Rangers. Click through to hear Larry speak on his love of Rhones varieties.

He escaped from a life as a cost analyst in the aerospace industry. After 17 years of that, he started life again, as a cellar rat at Santa Barbara Winery, and ended up deciding on a career in wine. In 1994 he made a Santa Barbara County Syrah that got great reviews in both Wine Spectator and Wine Advocate.

Craig himself was behind the table pouring the wines. This may have been a lucky last sighting, in August of 2016 he sold his winery in a rare (at least these days) family to family deal with Daniel Green. He is remaining with the winery through the first year of transition and then will sit on the board indefinitely. Perhaps he just needs a change every 17 years. Regardless it was great to have an opportunity to speak with him.

Ah…then you have the Larner wines. Michael grows Rhone varieties, Syrah, Grenache, Mourvedre and Viognier, as well as a little Malvasia Bianca. Michael was instrumental in the creation of the Ballard Canyon AVA which is becoming more and more well known for their world class Syrah.

Michael spoke with us about this gathering of winemakers after the party.

a stage was set for the band, that spilled over onto the back of a flatbed truck to provide enough space.

The beautiful Coastal Oak in the Larner Vineyard

Want to know more about the Santa Barbara Wine Region? You can find plenty of information on our website. And while you are at it, follow us on Facebook or Instagram for great information on wine and the people and places behind the wines. 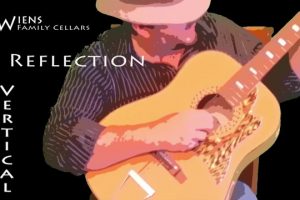 Wine is terrific, and when you pair it with food[...] 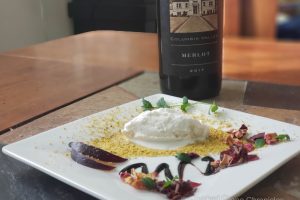 October is Merlot Month. It’s also the month of our[...]

The Temecula Valley in Southern California is a wine area[...]