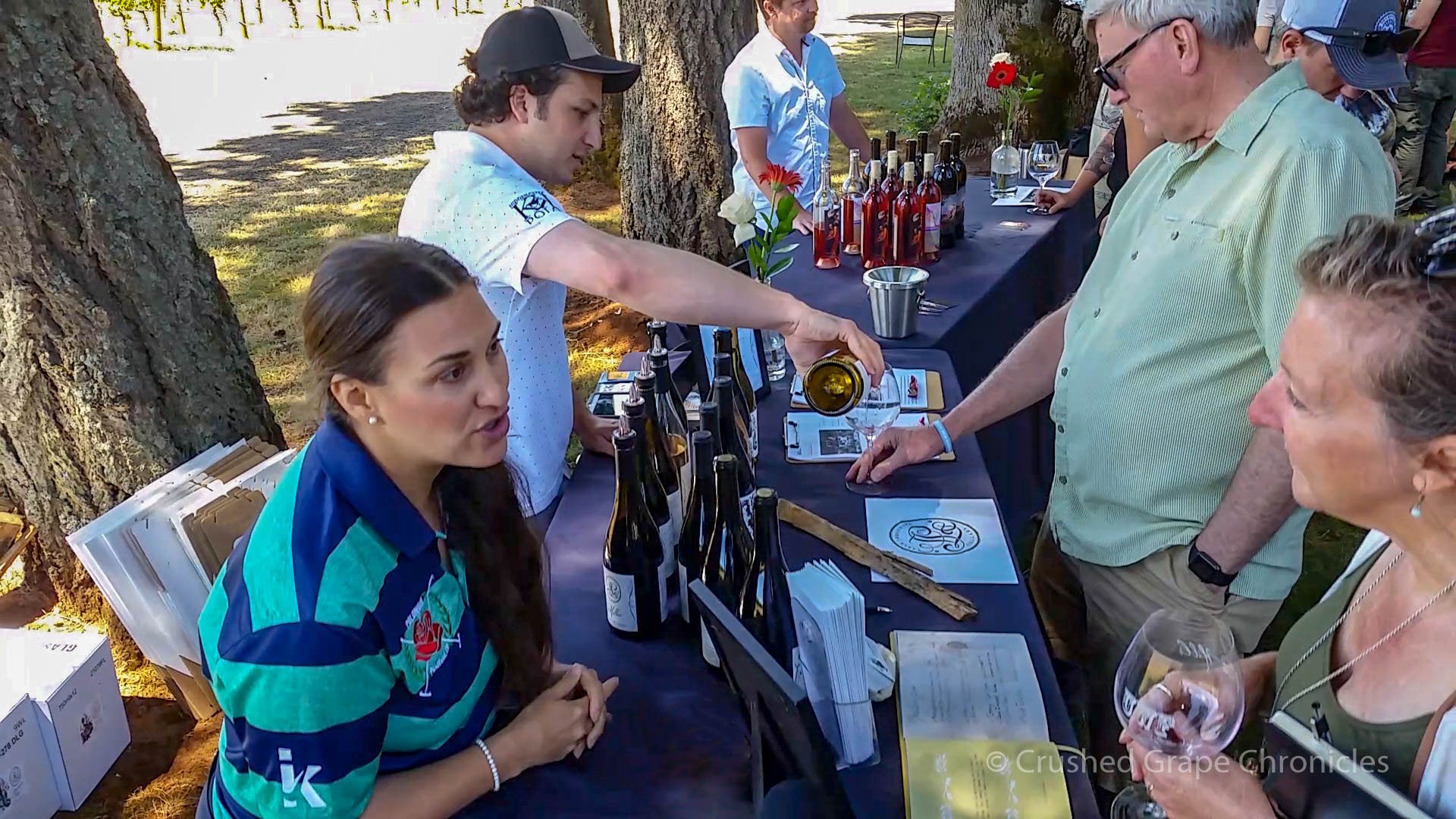 Leah Jørgensen – Pirate Princess and Winemaker, that’s what it reads on her business card. 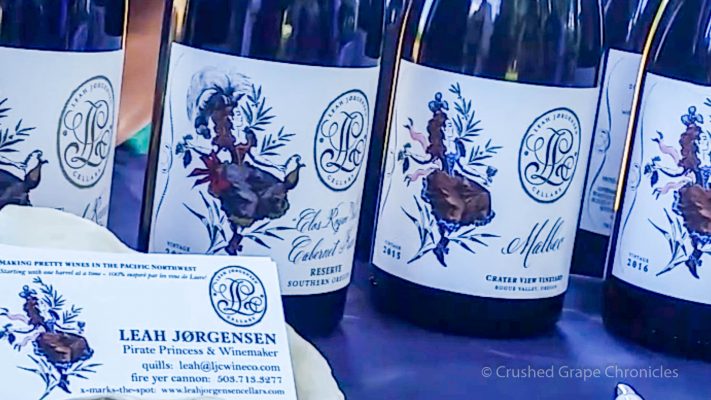 I had heard about Leah Jørgensen.  There was a post of a great wine label on Instagram by a fellow wine writer, talking about this White Cab Franc.   Yep, you read that right, White Cab Franc.  I then saw her name as one of the winemakers that would be at the Uncommon Wine Festival at Vista Hills that we were planning to go to during our trip to the Willamette Valley, and I was anxious to taste this wine and talk with her about it.  I had no idea how enchanting her wines would be or that we would spend a fascinating hour talking with her, not just about her wines, but about the vineyards she sources from and the ancient seabed that lies beneath the top soil in the southern part of Oregon.

We are not alone in finding her fascinating; She was named one of “15 Women in Wine to Watch” by FOOD & WINE (March 2018) and her wines have been well reviewed by Wine Enthusiast on numerous occasions.  She is putting Cab Franc on the map in Oregon.

A little bit about the Pirate Princess and Winemaker

Leah was previously a representative for a wine distributor in Washington DC.  She worked with embassies, providing them wines from a portfolio she managed.  She is partial to the Loire Valley and many of her wines (most) are influenced by this love.

She comes from a family that has always been passionate about wine.  Her mother’s family has been making wine in Italy since the 1700’s, Her grandfather’s family made barrels in Austria.  Her father was raised on a farm outside of Eugene and her cousins own the fisherman’s market in Eugene, and are fishermen who run boats that go up to Alaska.  So creating great wines that pair with shellfish…well, that’s really in her blood.

We spent a bit of time at the Uncommon Wine Festival talking with Leah.  She’s incredibly knowledgeable and passionate.  Conversations with her, you just don’t want them to end.  As a result, we have a collection of 7 videos from our interview with her, discussing soils and climate in Southern Oregon, the grapes she uses, the influences of the Loire Valley and several of the wines she was pouring that day including her Sauvignon Blanc, Blanc de Cabernet Franc, Rosé of Cab Franc, her “Tour Rain” blend and her Malbec.

So we begin our conversation with her speaking about the Southern Oregon Soil series and how the Loire Valley influenced her wine making.

“…we are definitely inspired by the Loire Valley, but we are very fully aware that Southern Oregon is not the Loire Valley, just like the Willamette Valley is not Burgundy.  We have points of reference, reasons why we can grow some of the same varietals.  With Southern Oregon, looking at some of the vineyard sites that we have like Crater View Ranch which we work with, with our Malbec, our Sauvignon Blanc and some of our Cab Franc, there’s ancient marine shellfish, shell imprints, shell fossils and blue schist, ocean bottom rock and this is all present from a subduction that happened 250 million years ago.  So mostly when we talk about Oregon Wine and soil series, we are often talking about the Willamette Valley and the Missoula flood, and the influence of the Missoula Flood which happened about 17 million years ago, so now we are talking about really ancient 250 million years ago.  The stuff that we are seeing in those vineyards in the Rogue and Applegate, but especially in these particular vineyards in the Rogue, they even predate the Old World.  When we think of the Loire Valley, my inspiration, Paris used to be under a tidal basin, so all of the waters that were in that tidal basin around Paris are now the vineyards for the Loire valley.  So you find shellfish and ancient marine fossils in some of the vineyards of the Loire Valley.  That episode, when the water was all in those vineyards in that area, that was about 100 million years ago, So our geological episode happened 150 million years before that, so Old World, right?  I’m really proud of that, I love talking about these soil series and the ancient marine shellfish, because I think it’s a new dawn for Oregon wine to talk about other regions that have really fascinating geological stories.  So that’s really the inspiration for me, capturing the sense of place and the soils and then also the grapes that seem to make sense, Cab Franc Malbec, (in the Loire Valley they call it Côt), Sauvignon Blanc.”

This is just the start of our conversation with Leah.  We went on to learn about the grape varieties and how they grow in southern Oregon, and then we talked about each of her wines as we dipped our nose in the glass and tasted each.

And join us back here at Crushed Grape Chronicles  as we continue sharing our conversation with Leah!  And don’t forget, you can also find us on Facebook, Twitter and Instagram