Mudgee, it’s a fun name to say. The name of this region in Australia’s New South Wales is derived from the word “moothie” for “nest in the hills” in the Wiradjuri tongue.  We drove from the Hunter Valley over the mountains and into this region to speak with David Lowe of Lowe Wine.  I asked David about his history as well as that of his family in this region.

The region was settled by Europeans in 1824, with people moving west from Sydney.  The agriculture then was mostly sheep and people settled along the river for water.  It was 1825 when Robert Lowe was granted land in the Mudgee Region and 1832 when Robert’s widow Sarah and her 11 children moved to Mudgee, to live on this land. David’s family worked with sheep, cattle and wheat crops.

Farms started to pop up.  Australian horticulture at this time was like the American Midwest.  They set up large expanses of land devoted to a single crop (you know, mono-culture).  This area, however, was a bit more varied and one crop, or way of growing, didn’t work for the entire region. They found that much of this land was better for smaller farms and raising more diverse types of agriculture.

Similar to California, grapes got started with the gold rush.  Where there are people, there is bound to be wine.  The gold rush in this region of Australia hit around the 1850’s.

How David Lowe got into wine

David’s family have always been in agriculture.  There was a winery next door as David was growing up and he worked on the bottling line.  When the laboratory technician had to be gone for a while, they put David in the lab.  He found he loved the chemistry.  So, at 15 when he had to choose the elective that would be his career, he announced to his family that he wanted to be a winemaker.

“I made that decision and I’ve stuck to it.  So, who knows if I’m good at anything else or not.  In fact, my parents, I found out later on, I think used to go to church to pray for my soul. Their view of a winemaker, was someone who had a bottle in a brown paper bag under a bridge.”

Eventually he did convert them, and they started their own wine cellar.  David helped his father plant the first vines at Tinja, the family property in Mudgee in 1973.

After graduating with his degree in Oenology from Roseworthy College, David worked as the Assistant Winemaker for Rothbury wines.  Rothbury in the Hunter valley was run by Len Evans and Murray Tyrrell.

Len Evans was a writer, vineyard owner and much more.  Those of you who are older might remember “The Galloping Gourmets” a book he co-authored with Graham Kerr, which Kerr later turned into the syndicated cooking show.  More importantly, he became one of the most influential people in wine.  He created the Australian Wine Bureau and was chairman of several wineries over his career including Rothbury Wines, Petaluma, Evans Wine Company and Tower Estate. He transformed blind tasting into a sport and to this day the Len Evans Tutorial aims to educate Australians in the wine industry through an intensive 5-day tutorial of tasting and judging wines with Masterclasses on the greatest wines of the world.

“I was very fortunate to work for a wine company that had … as the chairman of the company arguably one of the 5 great men of wine in the world.   His name was Len Evans….I was exposed to some of the great wines of the world.  He was adamant…on Day 2 when I was working there, that I had to try the best 20 wines in the world.   I think he wanted to have them himself afterwards, but at the time, I went along with it.”

Nine of the twenty wines that Len Evans had him taste were either bio dynamic or organic.  This made him want to explore bio dynamics.  What was it that made these wines better?  What was this relationship between bio dynamics and quality?

It wasn’t until the early 2000’s that he was able to attend a conference in Australia on bio dynamics.  This changed the way he wanted to grow.  He headed home to the family farm.  His parents were older and had not been working the vineyard and the property was rundown from being inactive.  He looked at bio dynamics as being a way to fix the property.

“So, we started down the path to learn about bio dynamics. And that’s taken now nearly 20 years to get right.  And I don’t think we have it right or anywhere near it, but we’ve made an improvement.”

We will speak more with David about Bio dynamics later.  His philosophy of Slow Wine making was one of the things that drew me to this place. He cares deeply about the land and continues to try to improve his stewardship of the land each vintage.

You can read more about David and his Zinfandel (yes I said Zinfandel, in Australia) here.

For more on the Mudgee Region check out Visit Mudgee, and take a look at our interview with Cara George. 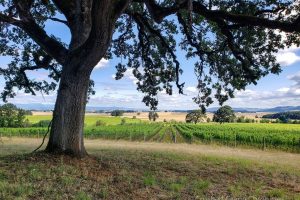 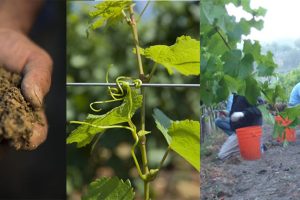 Collage of hands and soil, vines in spring and workers picking wine grapes

Climate Change, Finding Sustainable Italian Wines and Why you should Care #ItalianFWT

Climate change and sustainability.  If you love wine, you really[...] 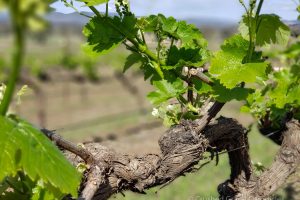 While visiting Australia in October of 2019 to attend the[...]