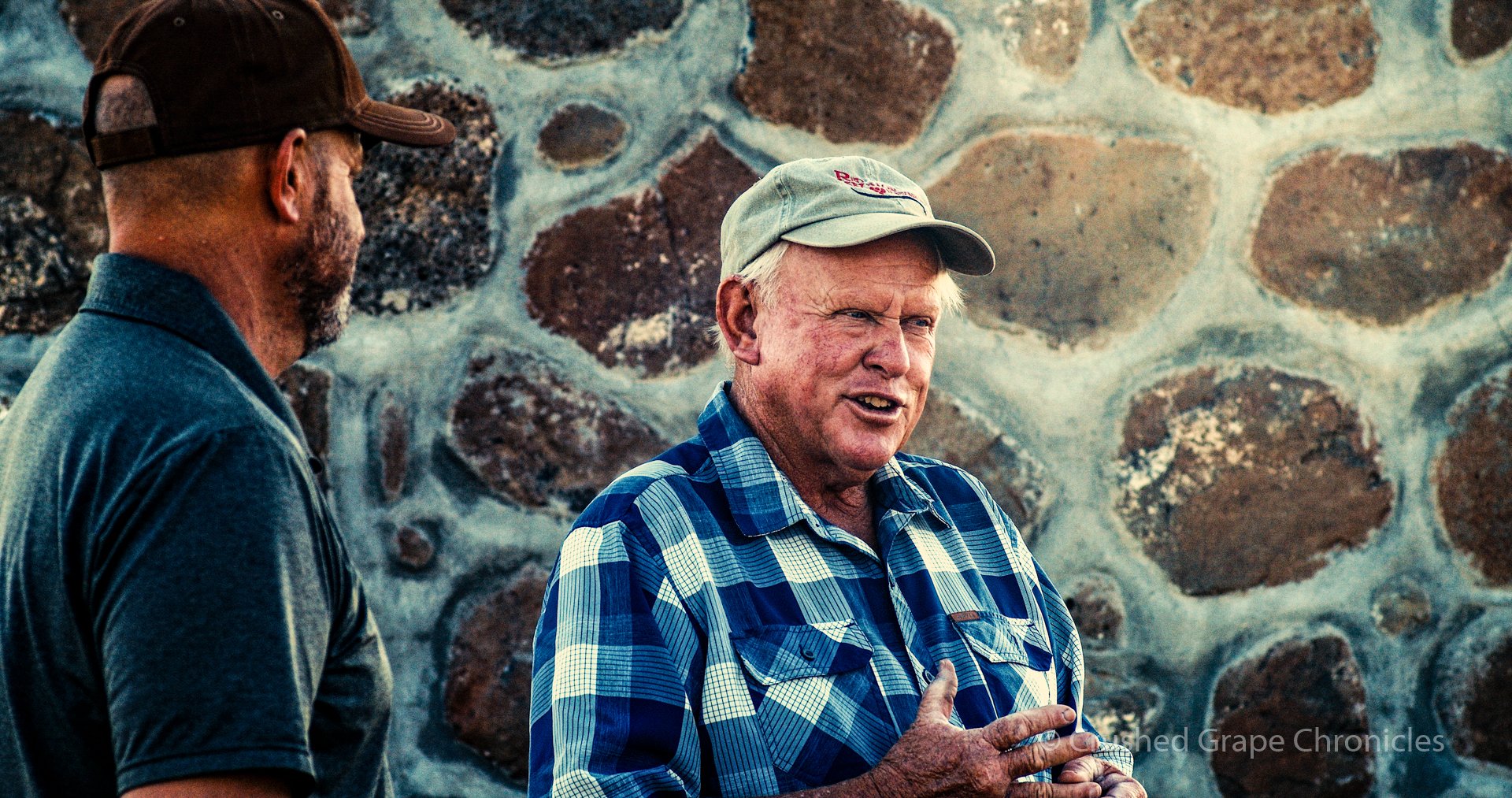 We were lucky enough to spend an evening with Jonathan and Mike Sauer at the iconic Red Willow Vineyard in Washington’s Yakima Valley. We met Jonathan, who took us on a tour of the vineyard. You can read that post here. Our final stop was the Chapel where we would capture sunset. This visit was thanks to the help of Barbara Glover, of Wine Yakima Valley. I had reached out to her to ask about a beautiful vineyard to shoot at sunset. She immediately mentioned Red Willow and put me in touch with Jonathan.

Sunset in the summer in Washington is late in the day. We wanted to be respectful of their time. This was last in the day and at the time when I would expect they would like to be home with their family for dinner. Jonathan was concerned with our time asking if we wanted to go straight to the Chapel, or if we would like to see a bit of the vineyard. Happy for the extra time with him, we took him up on that offer. His father Mike surprised us and joined us at the Chapel to take in the sunset.

We pick up there…

As we reach the Chapel, Mike Sauer, Jonathan’s father, is there in the shade.  Our conversation takes a path through the original Semillon to the lesson of planting grapes on a hill.  This was not so easy when they first planted.  Modern drip irrigation was not invented until 1959.  These systems were not really seen in Washington State until the late ’70s. Early on they would have needed to use handlines, which would have caused erosion. Early drip irrigation of course didn’t have pressure compensating emitters.

“, so, you did everything by tubing size.  You started off with a bigger tubing and pretty soon by the time you’d get down to the bottom, it was tiny tubing, to use up the friction loss to even out the pressure.  There was a whole lot more design that went into the old system.”

We move onto the story of the Vineyard.  Mike Sauer grew up 20 miles from here.  In college he majored in Ag Econ and was sure he would be a banker or work at an Ag Company.  But love can change your plans.  He met a girl in college, who became his wife.  Her father, Harold Stephenson, had a large successful farm here and offered Mike a job.  As the new kid, Harold thought Mike should have something to experiment with.  There were cherries, or apples or grapes…but these French sounding wine grapes, well they were just beginning, and they sounded interesting to Mike.

“I got hooked up with I guess you would call him the father of the Washington Wine Industry at the time, Dr. Walter Clore.”

At that time it was all about finding varieties that would survive the winter.  They started with Lemberger, Cabernet Sauvignon and Chardonnay because they were hardy.

Jonathan tells me there were maybe 6 wineries in Washington at this point. The modern Washington wine Industry was just in its infancy.

“Dad was one of the earlier pioneers, way out in the middle of nowhere at the very end of the valley.  Who knew if anything would survive out here?  He kinda really took a leap of faith.  And I’m glad you did!”

Dr. Clore was exploring the state and this was one of about a dozen original remote test sites planted to see where grapes would grow.  They would pick the grapes from this different sites at the same brix level, make wines from them and then send them off to an expert taste panel for review.   The Red Willow wines consistently came out on top.

Dr. Clore emphasized knowing getting to know the site and its weather.

“In those days we had no idea if this was the best site.  It was a fairly large farm. At the time I had a little trail 90 Honda Motorcycle. After hours I would hop on it and ride clear around the farm.  It was about a 7-mile loop and check the high/low-temperature thermometers.  Those days we didn’t have the $50 thermometer that will record anything nowadays.  In those days you had to go every day and record them.  That really taught me something. The difference from this place to a half a mile, a different hill, a different slope.  We take so much information for granted today.

Those were truly pioneering days and very exciting times too. Just learning, the variety, what would grow what would survive.  And it was very much Washington trying to gain a reputation in the World.  It was a state coming together very cohesively, us against the world, more or less, to gain respect.”

It was not long after their vineyard got started that Mike Sauer met David Lake. In 1981 David Lake began making vineyard designates from Red Willow Vineyard. Mike thinks at that point, perhaps only Ridge Vineyards in California was doing vineyard designates. This idea which seems so common now was new at that time in America, attaching an identity, a sense of place to a wine.

The story of the iconic Red Willow Chapel

A few years after they got started, David Lake started Associated Vineyards, which later became Columbia Winery.  He and Mike met and became friends, beginning a long relationship.  As I mentioned before, it was David who first suggested planting Syrah here.  He also joked that if they had syrah on a hill they should have a chapel-like Hermitage.  The Sauers are a spiritual family and Mike liked the idea.  He had a stonemason from Mexico working for him doing rock work and they put together an idea for a chapel.  It took 3 years to finish.

“and then I found, you build a chapel, you have to explain it.  It’s been an identity for our vineyard.  It’s not a marketing thing, it’s a place for our family, a place to pop in and say a few prayers.  It’s a connection.”

It is now iconic in the Yakima Valley and is the symbol for the winery.

The four legs of the Stool of making great wine

Mike talks about the 4 things that make a great wine: Soil, variety, the work of human hands, and then finally that magical vintage.  He references a book he read by George Rainbird “An Illustrated Guide to Wine”.

The word “Terroir,” he says can be so overused. It’s essence it the uniqueness that a site brings to the fruit and therefore the wine. Variety of course is important and Europe did much of the hard work of finding how different varieties best grow, allowing them some guidelines to be able to follow here in Washington, The work of human hands is the 3 leg, while the 4th is that magical vintage. It’s the thing that is out of human control. Something about that season can make one vintage so different from others. As Mike puts it …

“Every once in a while, by divine grace, you have these magical vintages. It’s that part of the wine that none of us control. The season, the vintage, mother nature, the hand of God… It’s what makes wine interesting.

Great vintages, you don’t just snap your finger and duplicate.”

Jonathan points out the different blocks to us from this high vantage point. The Chapel hill has 4 blocks, then there is the Peninsula to the North and further past it the Marcoux, in between those two you find Olney Springs.

Where the name Red Willow comes from

The name, Red Willow, is the name of a spring above the vineyard, which has now become a dry creek bed.  In the fall it is filled with Sumac that turns a bright scarlet color.

Jonathan: “Anyway, I’m glad you chose that name!  Or I think Grandma picked it out.

This vineyard is family-based.  Mike speaks to Red Willow being multi-generational.  The farm is almost 100 years old and Mike is the 3rd generation, making Jonathan 4th generation and already some of the kids and grand kids are working on the farm.  Often vineyards in Washington seem to change hands every 30 to 40 years.  “It takes time to learn the soil, the identity, how we grow the grapes and interacting with the winemaker. And the wineries.”

They know their fruit here, they have seen it evolve and provide consistency to winemakers, as well as variety.  They also really seem to be a sweet spot for Cabernet Franc and Mike believes the Right Bank Blends created from the vineyard are a beautiful way to showcase the site.  Merlot, which has been forgotten does well here as well as Cabs.  This blending of the three varieties used in Bordeaux, is working very well.

The site is not windy but there is always a gentle breeze, so there is air movement. Bud break is mid-April.  The northern latitude gives them almost 2 hours more sunshine on the longest day of the year than San Francisco.  At the top of harvest, mid-September, days quickly get shorter and the vines know that winter is coming.  They have a compressed growing season, with long sunny days and deep winters where the vines go into full dormancy, desert climate with the ability to irrigate, which gives them significant control over the vines, and high elevation.

There is such stability and power in a place that has been here a while and learned from the ground up and is still so ready to look to what else can happen.

We wrapped the formal conversation.  Michael headed off to set cameras up to catch the sunset.  While Jonathan, Mike and I pulled a picnic table into the shade behind the Chapel.  Jonathan ran and picked us up a beverage and some fresh rainier cherries and I sat with Mike and Jonathan, chatting, and taking in the sunset.  Watching the birds fly over swooping in to pick off flying insects, as the sun slowly sank over the mountains, Mt. Adams in the distance the evening couldn’t have been more perfect.

Loki approved wine for dinner. This #sample from

We have been celebrating Merlot Month with #Merlot

Last year we were invited for a media visit to Ora

Last week, amidst lots of research and wine writin

Dessert with Merlot? Yep! I know some people don

We kick off #Merlotme with these two beautiful #sa

It's Merlot Month! We recieved these media #sampl

What's in that cup? The start of dessert for a #M