I’ll be honest, I’ve not had a wine from Moldova before.  I’ve heard and read a bit about the country and its wines and when #WorldWineTravel had an opportunity to collaborate with Wine of Moldova on their National Moldovan Wine Day, I was interested to participate.  Our host for this is Lynn Gowdy of Savor the Harvest, you can visit her Invitation post here.

Wine of Moldova and Vinconnexion sent us samples of 4 wines.  All opinions are our own.  We will start out with a bit about Moldova, dive into the wines and pairings and finish with the pieces by our colleagues at #WorldWineTravel which will give you additional opinions and information on the wines of this region, as well as some spectacular pairings.

Moldova, like Georgia, was the source of wine for the Soviet Union.  The country is covered in vineyards. At one point in the 80s there were over 200,000 ha of vineyards, this in a space that is slightly larger than Maryland.

In the mid-80s as an anti-alcohol campaign began in the Soviet Union about 1/3 of the vines were pulled up.  They continued exporting to Russia through the collapse until the 2006 embargo by Russia on Moldovan and Georgian wines. Russia has since gone back and forth importing Moldovan wines, but they hold their purchases like a hostage, in an attempt to keep the country from leaning too far to the west.

Over ¼ of the country is part of the wine industry in some way.  This is their country’s bread and butter.  It has divided the country and the industry into those who look back and wish for the return of what they consider better days and those who are embracing the future and finding a way out into the great world of wine, holding on the heritage, but building anew.

The grapes of Moldova

The large wineries here have gone from bulk wines in large tanks to finding new directions with old ways and new smaller wineries are popping up.  I have seen multiple sources for vineyard coverage. The documentation from the Wine of Moldova from 2018 listed 74,200 hectares (183,352 acres) of technical varieties. This morning I heard a quote of 112,000 hectares during the My Wine Day with Wine of Moldova conversation. This may be a recent update, and could include private non-commercial vineyards. This is a country, where there are many backyard vineyards and people have a culture of home winemaking .

The most cultivated varieties are International with Cabernet Sauvignon, Merlot, and Pinot Noir leading the reds and Aligoté, Sauvignon Blanc, and Chardonnay leading the whites.

Still, they are also embracing the indigenous varieties like the white grapes Feteasca Alba and Viorica and red grapes, Feteasca Neagra, Rara Neagra, and the Georgian grape Saperavi.  Currently, 73% of vineyards are planted to European varieties, 17% to Caucasian grapes (which include Saperavi), and 10% to local grapes.

Moldova is bordered by Romania to the West and South, Ukraine to the North and East. It is a landlocked country. The country sits mostly from around 140 meters (459 feet) above sea level, with its highest point at 430 meters (1410 feet).

The country is divided into three wine regions. Condru to the North in the center of the country focuses on white wines and covers the most area. Stefan-Voda below it to the southeast sits at a lower elevation and is the smallest of the 3 regions. Here you find the indigenous red grape Rara Neagra. Valul Lui Traian sits to the southwest. The climate here is warm and is influenced by the Black Sea. 60% of the wines here are red. These three regions sit within this country which they proudly point out is shaped like a grape bunch.

There are of course the two largest wine cellars in the world are located here, Cricova with 70 kilometers of galleries where they house wine collections from celebrities and dignitaries from all over the world, and Milestii Mici that stretches over 200 kilometers.

The Wines of Moldova

The four wines we received wines from Wine of Moldova as samples, included 2 white wines: Castel Mimi’s Feteasca Alba and a Viorica from Suvorav-Vin.

Located in the Condru region, Castel Mimi was founded in 1893. After 50 years in disrepair a restoration project began in 2011. Today this sprawling Castle is home to the winery as well as a restaurant, gardens and terraces and has cottages for overnight guests.

Feteasca Alba is an ancient grape that has been cultivated here for years.  At one point during the Soviet era, it was banned, but some growers hid it so save the variety.

After tasting this myself, I found much more rich citrus, meyer lemon, lemon zest, a little pith and nectarine. The white flowers were there subtly in the background. Michael was reminded a bit of Fresca, so he must have been getting some grapefruit in there. I did get some briny minerality.

This wine is 100% Feteasca Alva and has notes of rose, pear, honeysuckle, yellow apple, and cantaloupe.

Suvorov-Vin is named after a monument near the winery called “The hill of Suvorov” from the Russo-Turkish war.

Viorica is the name of a flower and is a woman’s name in addition to being the name of this grape variety.  It is an indigenous grape.

Suvorov-Vin is named after a monument near the winery called “The hill of Suvorov” from the Russo-Turkish war.

Viorica is the name of a flower and is a woman’s name in addition to being the name of this grape variety.  It is an indigenous grape.

The nose on this wine could not have been more different than the Feteasca Alba. My nose was filled with honey and beeswax, white peach, yellow apple, lemon curd and lime.

It hit me like a viognier with the addition of rich citrus notes.

The red wines included Rosu de Purcari from Chateau Purcari and a wine called Ampre made of Saperavi, Feteasca Neagra and Merlot from Radacini.

Chateau Purcari is located on the Dniester river and is in the Stefan Voda PGI Region. Located in the south western part of the region they are close to the Black Sea and the border to the Ukraine This historic Chateau is surrounded by vineyards and lakes.   They do supply the Queen of England with their wine.

This wine is a blend of 50% Cabernet Sauvignon, 40% Merlot, 10% Malbec, a Bordeaux style blend.  It has notes of forest fruit, plum and sweet vanilla.

When I stuck my nose in the glass I found blackberry, prune, black plum, baking spice vanilla and sweet tobacco.

Now we are into indigenous red varieties.  This blend leans into Saperavi the red fleshed grape originally from Georgia at 70%.  20% of the Moldovan indigenous variety Feteasca neagra, and 10% Merlot.

When I stuck my nose in the glass, the first thing I got was fresh cut herbs, followed by black pepper. There was black fruits like plum and blackberry and dark cherries, then the thyme wafted through. It ended with some menthol, eucalyptus notes and a bit of barnyard that was not at all unpleasant.

2 pairings, one for the white and one for red

Rather than try to pair across all the wines, we broke our pairings into red and white, with lighter dishes pairing with the Feteasca Alba and Viorica and heavier with the Purcari and Radacini red blends.

I was reading on other tastings with these wines to get a feel for what they would be like, as mine were arriving close to when we would need to post (they have not arrived as I type this).  My friend Liz Barrett at “What’s in that Glass” had tasted this wine and said that chicken piccata or ceviche would pair well (not together though, she warns!).  I love ceviche and have not had it in a while, so….

We started with prosciutto wrapped cantaloupe (thanks for that suggestion too Liz!). We then did a ceviche on an avocado sauce and a salmon carpaccio.

The Chateau Purcari Rosu de Purcari 2015 is a Bordeaux style blend. We did a bit of an non-traditional pairing, suggested buy Fiona Beckett of bacon and eggs. It worked wonderfully.

This wine has mellowed with good tannin and acids that are just right and the fat in the eggs was perfect with this. I did throw on some blackberries which picked up the fruit in the wine, as well as a spinach arugula salad with a bit of balsamic.

With the Radacini being a blend of Saperavi, Feteasca Neagra, and a bit of Merlot, I wanted to think more regional with flavors, but elevate them.  I had read about mamaliga which is a cornmeal dish, like polenta, so fried polenta cakes seemed appropriate.  We topped them with shards of parmesan, fresh thyme, walnuts, and arugula to pull out other flavors of the region and the wine. Of course, when you think of this region cabbage rolls or “sarmale” come to mind.  My husband won’t eat those (I grew up with them, thanks to a Hungarian mother).  We pulled in those flavors with grilled purple cabbage wedges and then grilled steak tips to bring in our protein.

With all the research I did, I still can’t wait to learn more.  Saturday morning (my time) there is a session with the wonderful Dr. Jamie Goode from London.  Sunday morning you can jump in and join the conversation on Twitter by following and using #WorldWineTravel as our group of writers share our discoveries on this region.  There are links below to each of their pieces. 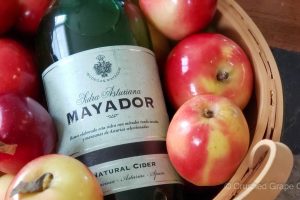 Sidra from Asturias in Northern Spain – its culture and traditions #WorldWineTravel

Asturias, Spain We are doing a bit of virtual travel[...] 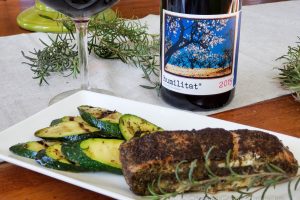 Jump to Recipe Spain has some beautiful wines, you think[...] 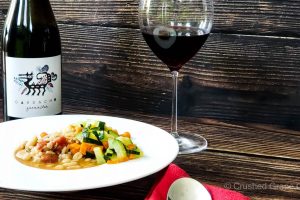 Jump to Recipe This month I have the honor of[...]