Pôchouse. What is that you ask? That was my response when I was researching what to pair with the Chablis I had picked up for this tasting. Quick answer…

pôchouse
La pôchouse, or pauchouse, is a recipe of French cuisine based on river fish, cut into pieces, and cooked with a white wine sauce, traditional Burgundy and Franche-Comté cuisine.

How did we get to the pôchouse? Let’s start with the Wine.

Chablis with the French #Winophiles

This month the French Winophiles are dipping our toes into Chablis. (scroll down to see all the stories by the Winophiles on the subject this month! AND… you can follow the conversation on Twitter using #Winophiles).

I found my wine, a Simonnet-Febvre Premier Cru Chablis from Mont de Milieu.

But let’s back up a little more. I suppose we should start with a little breakdown of the region.

Chablis is part of Burgundy. Although if you look at a map, you might find that surprising. It sits 80 miles Northwest of the rest of Burgundy and is actually closer to Champagne than Burgundy. (take a look at the small inset map to see what I mean). In Chablis, one grape rules them all and that grape is Chardonnay. In fact, it is the only permitted grape in the region.

This region has cool summers and cold winters, much like Champagne, but being further south and planted on South facing slopes it is protected from North winds and gets more sun exposure than they do in Champagne, allowing for better ripening. It is perhaps best known for its Kimmeridgian soils.

Those south-facing slopes are on an outcrop of Kimmeridgian marl, which provides great mineral nutrients for these grapes.

Breaking down the region

Chablis has but one Grand Cru. The Chablis Grand Cru is a 254-acre vineyard that is made up of 7 parcels. Then there are 40 premier cru vineyards, 17 of which are considered “principal” premiers. Mont de Milieu is one of these 17.

After that, you have “Chablis” (you can see that in the brightest yellow on the map below), and finally, the “Petit Chablis” which are tucked in and around the other vineyards and typically have less ideal slopes for sun and lesser soils.

So the wine we chose came from Mont de Milieu, and as I mentioned above, this is one of the 17 “Principal” premier crus. It sits on the right bank, on the east side of the Serein river. It is often compared to the Grand Cru site because it has similar sun exposure, which is important for ripening the grapes (remember it’s chilly up here in Chablis). The climate here is one of the warmest in Chablis which creates a rich wine.

The Kimmeridgian marl with clay and limestone-rich soil is not as stony here. The soils make the vines struggle and they tend to produce fewer leaves. This again helps with sun exposure to the berries for ripening.

A Border between Dukedoms

The area gets its name, which translates to “middle hill” from the fact that it marked the border between the dukedoms of Burgundy and Champagne.

Founded in 1840, this is among the oldest wineries in the area. It has undergone several name changes over the years and specialized in Sparkling Chablis before Crémant de Bourgogne was even a thing. Here is a great story of their sparkling wines and current owner Latour…

Simonnet-Febvre is the only one in Chablis to perpetuate since its origin the production of sparkling wines from the traditional method – now called Crémant de Bourgogne. The grapes still come from the slopes of the Grand Auxerrois area, located a few kilometers away from the famous Chablis vineyards. Ironically, Louis Latour from the 4th generation had celebrated the purchase of the Château Corton with bottles of Sparkling Chablis from Simonnet-Febvre. These bottles were ordered on December 8th, 1891, which was 112 years before Louis Latour finally purchased Simonnet-Febvre.

Alas…we are not talking about crémant, but rather their Chablis. But I did think that was a fun story.

This wine comes from vines that average about 35 years old, fermented and then aged for 12 months in stainless steel on the lees.

This wine was clear and golden in the glass. On the nose, I got slate and warm golden fruit. On my first taste, I got tart fruit, rich like golden raisins. As it opened minerals and chalk became more present.

As it continued to open and warm it flooded into warm blossoms, the rich fragrance of flowers on a hot humid afternoon.

We did taste a Chablis a little while back that I loved also. The difference between that wine and this was pronounced. The other Chablis was young, vibrant, and full of mineral. The Mont de Milieu, an older wine and age-worthy wine, was richer and fuller, less bright, less mineral-driven, but rounder with greater depth. You could see this in color in the glass.

Okay, back to the Pôchouse. So I was looking for a pairing for the Chablis and searching different sites. One of my go-to sites is Fiona Beckett’s Matching Food and Wine. Fiona had lots of suggestions, broken down into the different styles and ages of Chablis’. Of course, when I see something that I’m not familiar with, I’m intrigued. “Pôchouse” caught my attention. What was that?

So I googled it. Some of the fish stew recipes looked delicious but humble. I was looking for something a bit fancier. Then I came across a recipe that looked so elegant and delicious… Gourmet Traveler’s version of Pôchouse was so pretty, that I was determined to make it.

Of course, I couldn’t find perch, eel, sandre, or hapuku all of which they offer as options in the recipe. So we went with rainbow trout for our river fish, which I love anyway. Also, no sorrel or watercress was to be found, so I substituted spinach and arugula. Oh…and I never have Bay leaves in the house when I need them, so I used dry thyme. The dish was fairly easy to make and the sauce…OMG, it was heaven!

I’ll let you check the link for the full recipe, but here is the quick version.

Cook sliced onions, mushrooms, bacon, garlic, and your dried herb in grape seed oil and butter. Do this in a roasting pan you can then pop in the oven. Lay the fish fillets on top, bake a few minutes then pour about half of a bottle of chard over it and cook a bit more. (I didn’t use the Chablis…I wasn’t cooking with half a bottle of that! It was reserved for drinking.)

Pop it out of the oven, put the fish aside, and drain the liquid to make the sauce. You will put that delicious blend of bacon, onions, and mushrooms to the side for plating also.

Add some more butter to the liquid, plus olive oil and lemon juice, and whisk. (This golden elixir is truly amazing).

Now take the sorrel (or spinach like me) and cook it until it wilts in butter.

Okay, now make it pretty! Mushrooms etc spooned in the bottom, top with the fish, then the sorrel butter, a dollop of sour creme, spoon the sauce over (and let it puddle on the bottom), and finish with the fresh arugula (or watercress, if you are lucky enough to have it).

Our pôchouse is made with rainbow trout on a bed of mushrooms, bacon & onions, with a white wine sauce, topped with butter sauteed spinach, sour creme, and arugula.

How was the pairing you ask?

The dish was heaven and sang with the wine. The roundness of the wine paired beautifully with the sauce. The mushrooms and sour creme along with the mineral notes in the wine, the tang from the spinach, and the peppery arugula all made for a delicious bite that was so well paired. Yep, it was a close your eyes while you eat moment. That bit of Zen when deliciousness all comes together in your mouth.

The French #Winophiles on Chablis

On Saturday, April 20, we are convening on Twitter at 10 a.m. CST for a Chablis chat. If you like Chardonnay, ahem, Chablis, join in! Just use #winophiles and you’ll find us. We’ve got a fantastic group of bloggers posting about Chablis. We’ll talk about the region, the wines, food pairings, and travel! Here’s a peek at all the posts you’ll be able to explore:

Liz at What’s in That Bottle Shares Chablis: the Secret Chardonnay

Jennifer at Beyond the Cork Screw Has “French Companions: Chablis and Fromage Pavé”

Payal at Keep the Peas writes about “Chablis: A Tale of Two Soils”

Jill at L’Occasion writes about “Metal Giants: Windfarms and the Chablis Landscape”

Wendy at A Day in the Life on the Farm Brings Us “Chardonnay? White Burgundy? Chablis!” 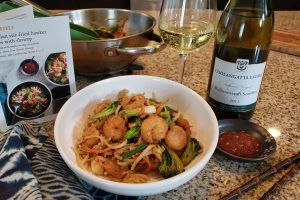 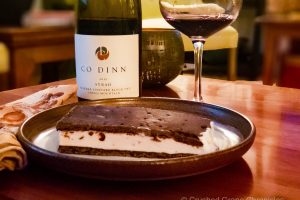 We got lost on the way to the Roskamp Vineyard[...] 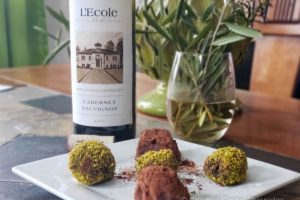 Steak and chocolate – The best way to enjoy a L’Ecole No. 41 Cabernet Sauvignon