Oregon’s Willamette Valley …You picture green hills, rain, and beards, don’t you? Well as we visited in July, we found lots of the first, very little of the second, and enough of the third to keep the myth alive.

After flying into Portland, we made the relatively quick drive, over one of the many bridges across the Willamette River and into the Willamette Valley. Our goal with this trip was to visit each of the AVAs (American Viticulture Areas) and most of the Proposed AVAs and learn a little about them to give us a better overall understanding of the area. We managed to visit all but one of the Proposed AVA’s. We did not have the time to make the drive to the proposed Lower Long Tom AVA, which is much closer to Eugene than to Portland.

I did a bit of research to prepare for the trip and thought I would share some of that, in case you are not familiar with the region.

Everyone we met told us how young the area is as far as vineyards and wine. They just passed 50 years. Humility is a virtue in Oregon. The grapes began in the Willamette Valley, but today you will find 2 other regions, the Columbia Gorge and Southern Oregon, where vineyards and wineries have a definite foothold. The state has 18 AVAs with the new Van Duzer Corridor within the Willamette Valley the possible 19th. Here are a few stats from the Oregon Wine Board. https://industry.oregonwine.org.

But there is more to it. 47% of the vineyards in Oregon are certified sustainable. And while they only tap into a 1% share of the US wine market, they held 20% of the Wine Spectator 90+ scores in 2015 & 2016. Quality is something they take great pride in.

This map shows the current AVAs, soils, and even the vineyard blocks. We thank the Willamette Valley Wineries Association for allowing us to use it and pass along their acknowledgments “Map data by everyvine.com, design by John Fisher, geologic cross section by Timothy A. Cross, special thanks to Patrick Reuter.”

The Willamette Valley is 60 miles wide at it’s widest (east to west) but is over 100 miles long (north to south), so you will note that the map is flipped so that as you look at it North is to the left, East is up, South is to the right and West (where you will find the Pacific Ocean over the Coast Range) is down.

The overall valley is the Willamette Valley AVA and within it, there are currently 6 sub-appellations.

The overall AVA spans the area from Portland in the North to Eugene Oregon in the South and sits between the Coastal and Cascade Ranges. Plantings began in 1966 and the AVA itself was established in 1983. The base of the valley itself is fertile and great for agriculture, except of course for grapes. Grapes need the struggle to be tasty enough to make wine. As a result, most of the vineyards will be between 200 and 1000 feet in elevation.

Within this large AVA, you will find the 6 sub-appellations, one of which is nested inside another. We will work our way from North to South (left to right on the map as you look at it) 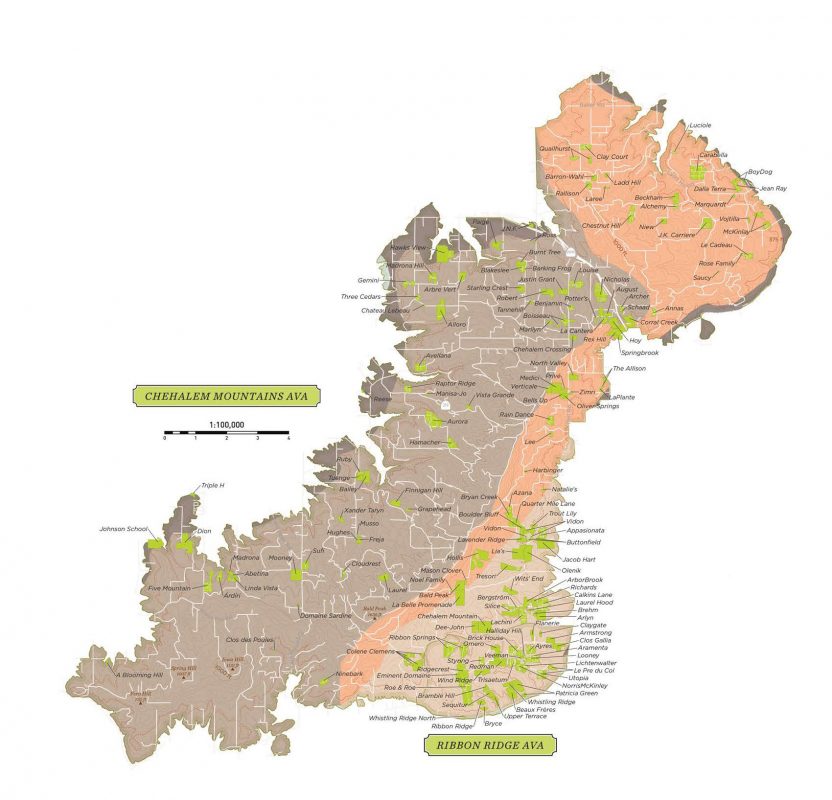 Furthest north and to the east side of the valley, you will find the Chehalem (Sha-HAY-lum) Mountains AVA. The Chehalem Mountain Range is 20 miles long and 5 miles wide and was established in 2006. Within the Range, you will find Ribbon Ridge (which is its own AVA) and Parrett Mountain. The area is home to around 150 small vineyards, most average around 12.5 acres and are family-owned.

Soils here vary. This was after-all an uplift that created the range and you find sedimentary seabed, red soils from lava flows, and glacial sediment. So you find variety in soils and within the AVA there will be both similarities and contrasts. This would be part of the reason for the nested Ribbon Ridge AVA and the proposed nested Laurelwood AVA. http://www.chehalemmountains.org/home 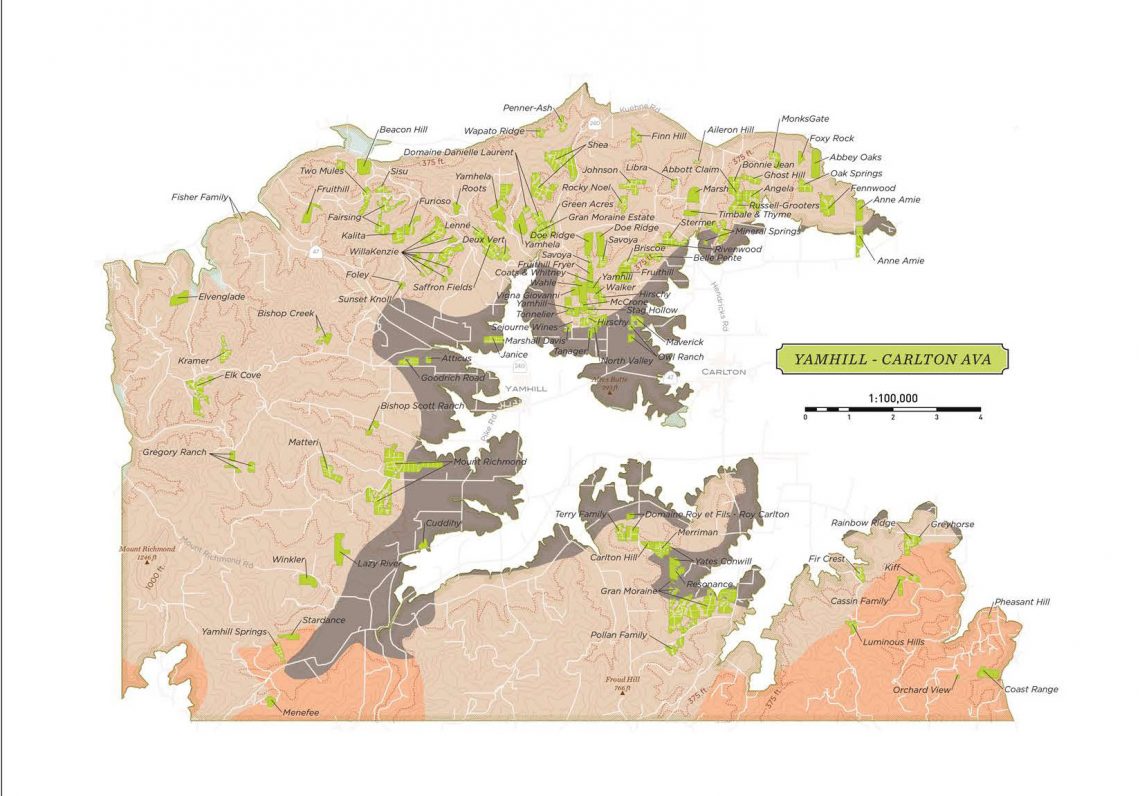 West of the Chehalem Mountains and North of McMinnville you will find the Yamhill-Carlton AVA established in 2005. The AVA was named for the two hamlets, Yamhill and Carlton nestled in the center of the horseshoe shaped ridges in the foothills of the Coast Range. The Coast range provides a rain shadow (an area where the rain typically does not fall) over the whole area.

View of Yamhill-Carlton from Fairsing vineyard

The soils here are the oldest of the marine sedimentary soils in the overall Willamette Valley. The soils are coarse-grained and drain easily, which is great for making the vines struggle. https://yamhillcarlton.org/

The uniform soils of ocean sediment that is high-quartz sandstone and weathered bedrock set this area of the Chehalem Mountains apart. http://ribbonridgeava.org/ 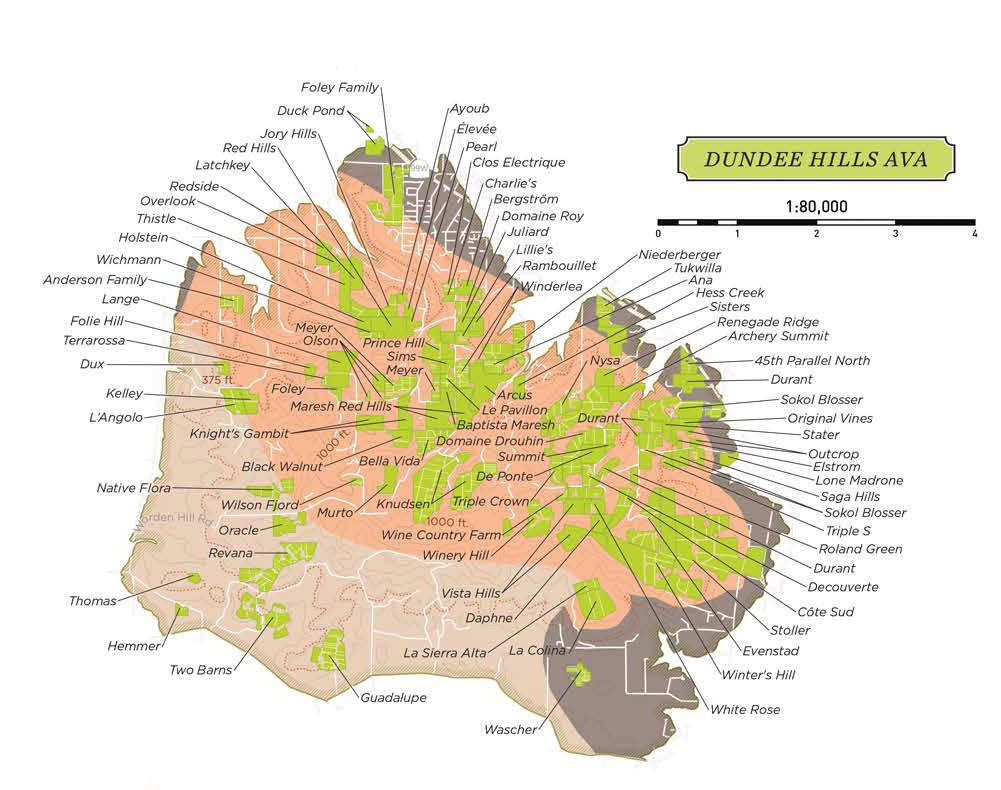 This was the start of Pinot Noir in Oregon. The first Pinot vine was planted here. When we speak about the area being in its 50 years of growing grapes, we are talking about this place, the Dundee Hills. Eyrie, Sokol Blosser, Erath…if you know Oregon wine, you know those revered names. It was here that David Lett, Dick Erath, and the Sokol Blossers took a chance and planted those first vineyards.

The Dundee Hills AVA was established in 2005. The soils here are almost all basaltic (volcanic) soil deposited by a lava flow 15 million years ago. https://dundeehills.org/about/ 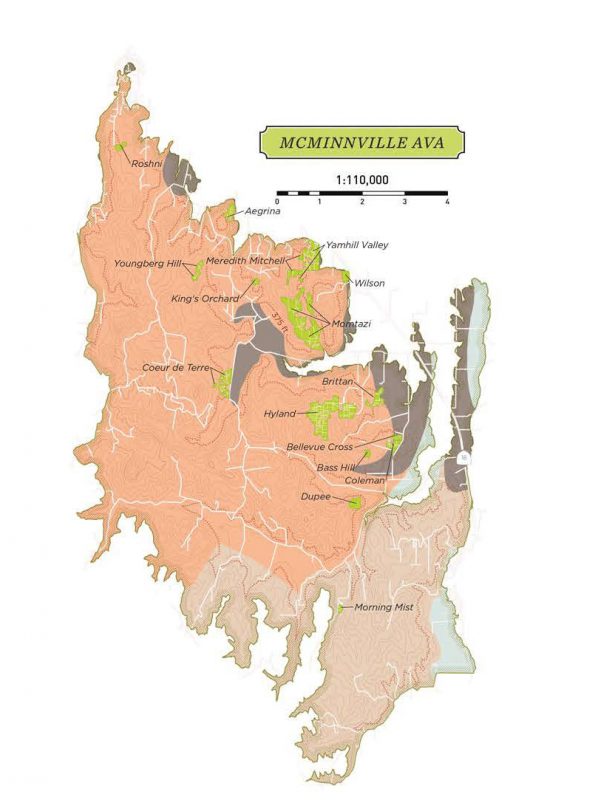 Also established in 2005, the McMinnville AVA takes its name from the city of McMinnville which sits just east of the AVA.

Vineyards in the McMinnville AVA

The vineyards sit on the east and southeast slopes of the Coast Range where the soils are uplifted marine sedimentary over basalt. The soils here are shallow and the Coast Range protects the area from rain. https://mcminnvilleava.org/ 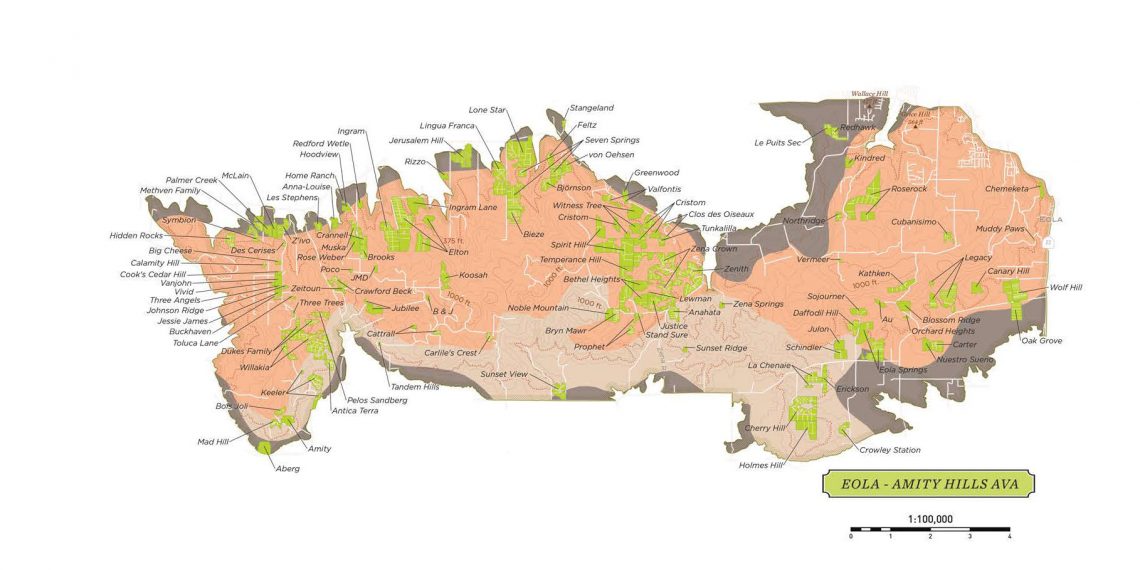 This AVA sits in the Eola Hill’s along the Willamette River and straddles the 45th parallel (just as Burgundy does) and reaches north to the Amity Hills. 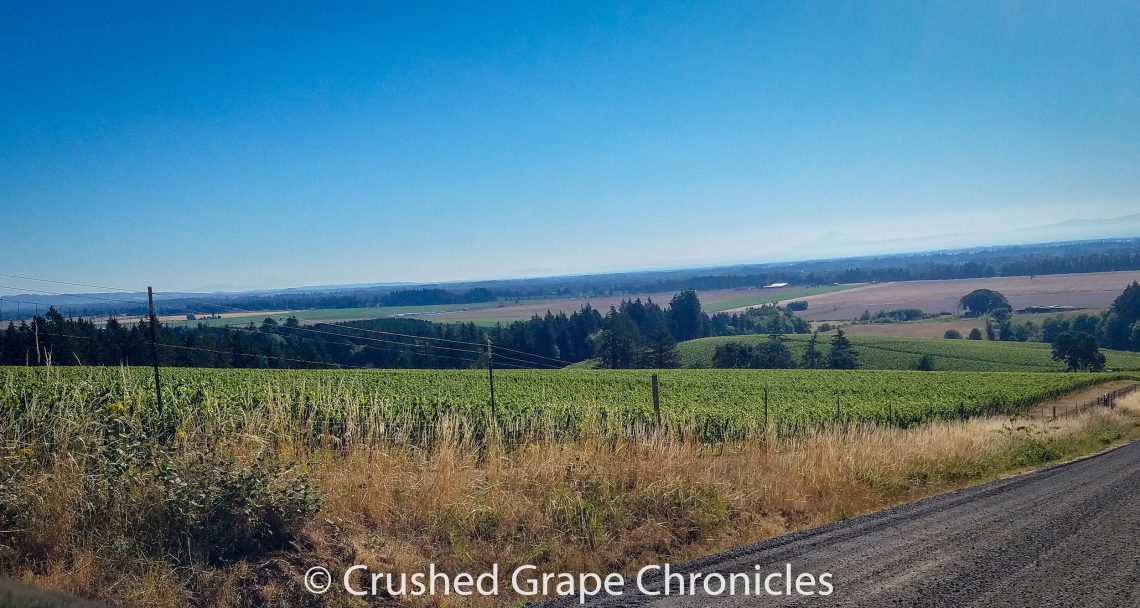 Vineyards in the Eola-Amity Hills AVA

Soils here are shallow and mostly volcanic basalt with marine sedimentary rocks. It’s shallow and rocky (that tends to make small concentrated berries). The Van Duzer corridor causes summer afternoon temps to drop, which is especially helpful in late summer as the grapes are ripening, to keep the acids firm. https://eolaamityhills.com/

There are 5 AVAs that are proposed and in process. While the Van Duzer Corridor AVA is likely to be the next approved, we are going to go North to South again so that you have a better geographical idea of where these AVAs sit. Keep in mind that we are showing you maps of the general area, the boundaries are actually much more detailed. We will dive into that as we explore each of these proposed AVAs in a future post. 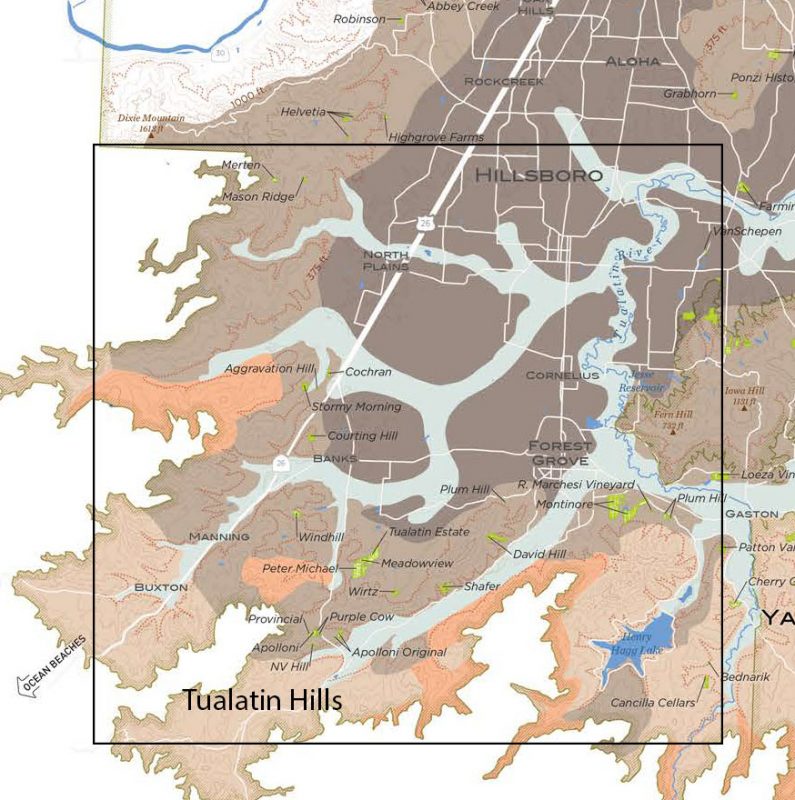 This area sits North of the Yamhill-Carlton AVA and West of Chehalem Mountains AVA. This AVA is horseshoe-shaped and its southern edge butts up to the northern edge of Yamhill-Carlton. From there it stretches north following the edge of the Willamette Valley AVA and then takes a right turn East toward Portland. It shares a little bit of a border with the Chehalem Mountains AVA on its southeast side and well as a tiny bit with the proposed Laurelwood AVA.

The soils here are Laurelwood. Not to be confused with the proposed AVA, this soil series is volcanic basalt and loess (windblown silt). In addition, the reddish soils here have pisolites (tiny balls of iron manganese).

Being due east of the Coast Range also allows them a rain shadow, so conditions here are dryer and allow for diurnal temperature shifts (day to night temperatures). 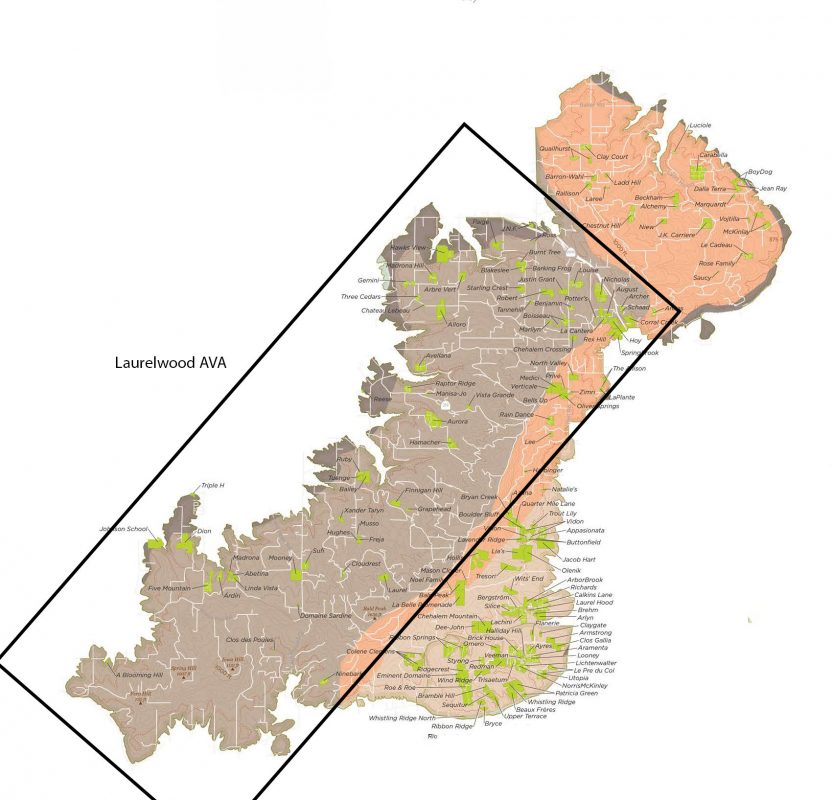 These Laurelwood soils are Ice Age Loess (windblown silt), contained within the Northern slopes. The southern and western facing slopes in the Chehalem Mountains are primarily Columbia River Basalt and Marine Sediment. 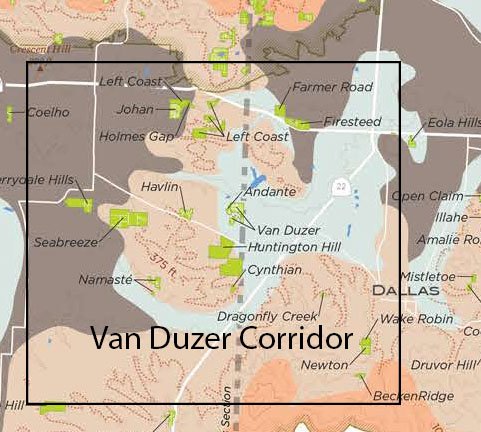 On the west side of the Eola Hills, you will find the Van Duzer Corridor AVA.

Soils here are basalt and marine sedimentary over siltstone bedrock. The winds here are key. Eola-Amity brags about the Van Duzer Corridor winds, but here, on this side, the strong winds cause the grapes to thicken their skins. 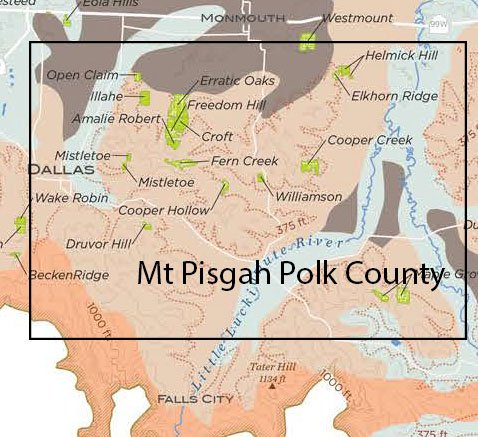 South of McMinnville and West of the Eola-Amity Hills, kind of out on its own you will find the proposed Mt. Pisgah/Polk County AVA. West of Salem Oregon, there are just 10 vineyards and 2 wineries in this area.

Here the base is some of the oldest rocks in the Valley, Siletz River volcanics, and it is covered in a shallow layer of marine sedimentary soils.

Elevations here are higher and the vineyards on Mt. Pisgah are protected from extreme temperatures and wind. 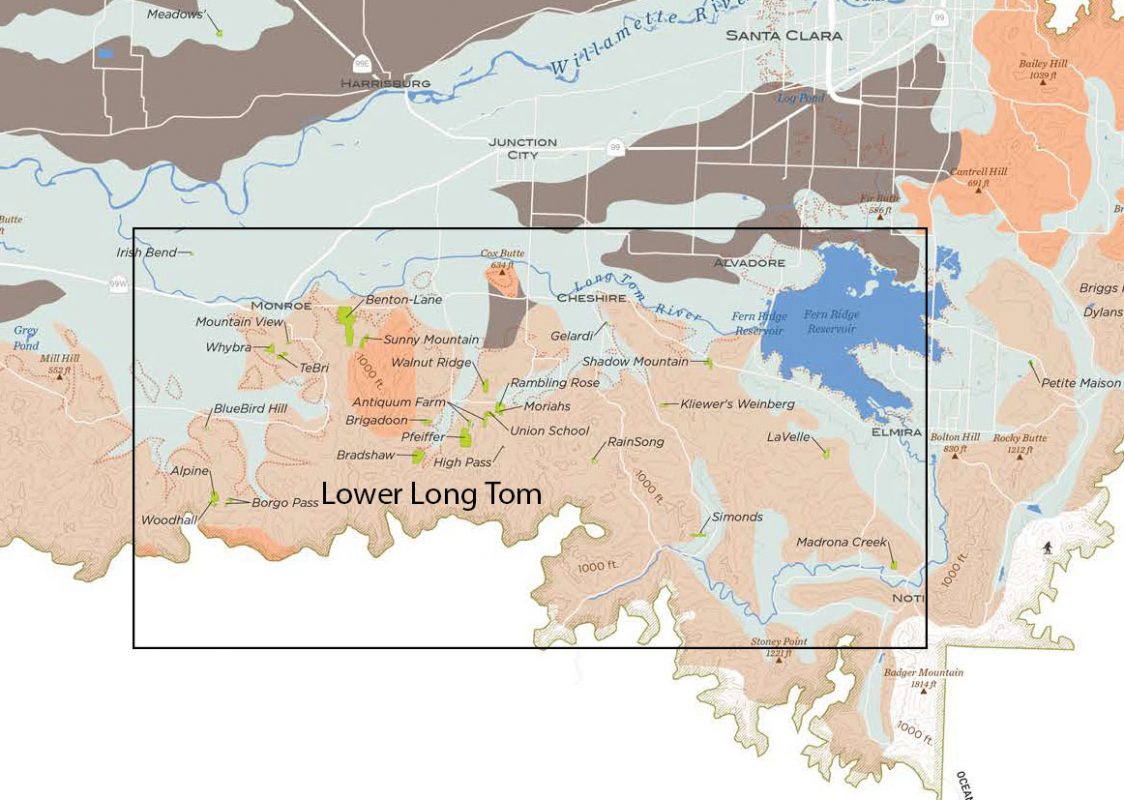 Far south between Corvalis and Eugene you find the proposed Lower Long Tom AVA. This region is south of Corvalis, north of Eugene, and sits on the western border of the Willamette Valley AVA. Soils here are marine sedimentary soil in the Prairie Mountain and Bellpine series.

Temps here are higher with Prairie Mountain diverting winds North and South around the area.

That’s just our overview. We visited all but one of these areas and we look forward to deeper dives into each AVA, with more geeky details about climate and soil and what that means for the wines. In the meantime, if you are looking for further information, you can visit Willamette Valley Wine, Oregon Wine, or check out this great article in the Oregon Wine Press.

And if you are as in love with this beautiful map as I am, you can get one of your own at Willamette Valley Wine

Watch here as we delve deeper into Oregon Wines. We have multiple interviews with fascinating winemakers to share with you, including a morning spent with Rudy Marchesi of Montinore Estate, who is instrumental in the proposed Tualatin Hills AVA.

You can also read our piece on the Uncommon Wine Festival, with our interview with Dave Pettersen the Winemaker and CEO of Vista Hills who founded the event. We look forward to bringing you interviews and discussions with all of the winemakers from this event. So check back here at Crushed Grape Chronicles. And don’t forget, you can also find us on Facebook, Twitter, and Instagram 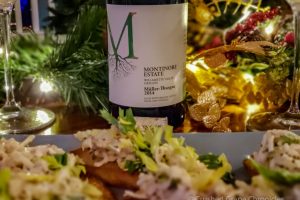 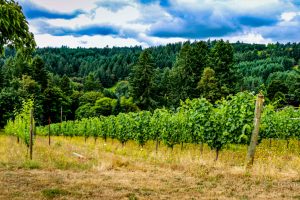 It was early morning of our last day in the[...] 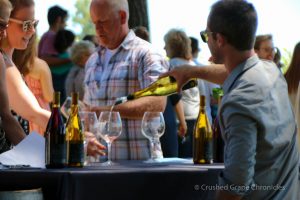 We met Ryan Pickens of Esther Glen Farm and Winery[...]

We are exploring the wines of Maury with the Frenc