Roussillon.  It’s not a French wine region that you hear much about.  But that is changing.  This month the French #Winophiles are digging into this region and of course, we are not doing it the easy way.  In a region known for its fortified wines, we are taking the road less traveled and exploring their white wines.

We are led this month by Lynn of Savor the Harvest.  She did a thorough piece explaining the region, that you can find here. As well as a preview post you can see here.

Join us on Saturday, July 18th at 11 am EST (or 8 am PST) on Twitter as we discuss the wines of this region.  Scroll to the bottom to see the other pieces written by this group of wine writers on the subject.

Let’s start with where we are. We are in France.  We probably gave that away, since this is the French #Winophiles. And, this is the South of France.  Can you smell the garrigue?

From snow-capped peaks to the Mediterranean Sea

When people discuss beautiful wine regions, this should be at the top of their list. Take a moment, immerse yourself in this slideshow of this stunning region with it’s diverse beauty.

316 days of sun.  37 stunning miles of coastline with the snow-capped Pyrenees rising inland.  The area is sheltered in an amphitheater created by mountain ranges. North you have the Corbieres, West the Pyrenees-Orientales and Mont Canigou, Alberes to the south, and of course the Mediterranean Sea to the east.  Then the rivers the Agly, the Tet and the Tech, cut through the region, creating it’s 3 valleys.

The winds here are similar to the Mistral in Provençe.  Here however, the winds come from 8 directions. These winds keep the grapes dry and pest free.

This is one of the earliest regions for wine in France, with 28 Centuries of winegrowing under it’s belt.  The Phoenicians brought wine grapes to the shores of the region in 624 BC.

Tautavel on the northern edge of the region is home to the cave Caune de l’Arago in which the oldest human remains known in Europe were found.  Tautavel Man dates back 450,000 years.

The region’s name has two sources; ruscinos was the name for the small prehistoric houses in the capital city Perpignan. The name also refers to the red clay, schist, and limestone soil found in the vineyards, rousse for a shade of red and sillon for furrow. (Source Roussillon Wine – Ten Facts That May Surprise You by Liz thatch MW)

The beauty of the region has attracted artists such as Dali, Matisse and Picasso.  As such it is scattered with museums and of course cafes.

This region is considered French Catalonia or often called Northern Catalonia. As recently as 2017 there was a push for declaring independence from both France & Spain. The people here consider themselves Catalan and the Spanish influence is apparent.

Foods here often have a Catalan influence.  You find seafood stews, paella, shellfish as well as lots of vegetables and olives and meals are often more of a tapas style.

Vineyards in the region can be quite diverse in soil, climate and aspect.  3 rivers and 8 winds, means multiple valleys, with soils that change as they are washed or eroded down and microclimates from different aspects in these nooks and crannies of the terrain.

While known for Vin Doux Naturel, over 80% of the wines are dry. Here you find the highest percentage of organic and biodynamic vineyards by hectare in France. There are 24 grape varieties in the region. For still wines, you will find most often, red blends of grenache, syrah, mourvédre and carignan and white blends of grenache blanc & gris as well as macabeu.

Maury sits on the northern edge of the region in what I find repeatedly referred to as “the hinterlands” in the Agly valley.  I have a friend whose parents own a B & B in the region, and the photos I have seen of the region are enchanting.  It’s a place in the universe that I intend to visit.

Mas Amiel and the gambling bishop

The story… almost 2 centuries ago, the Bishop of Perpignan and Civil engineer Raymond Etienne Amiel are gambling. The bishop bets a piece of land “Domain de Goudous” in a game of cards and Raymond wins.  Thus begins Mas Amiel.

Purchased by Olivier Decelle in 1999, this is now the largest private cellar in Maury. The property, which when the Bishop lost it had just 10 hectares of vines, now has 170 hectares planted.  Yields, as they tend to be in Roussillon, are small.

While there remains high demand for the sweet wines and it remains more than half of what they produce, they are beginning to focus on dry wines.

This dry white wine is a blend of grenache blanc, maccabeu, roussanne, and marsanne. The grapes are grown on schist laden slopes that face southwest.  These are younger parcels in the area of Mas de Las Fredes. This wine is aged in vats on fine lees until bottling.

So what to pair this with? I was channeling the Mediterranean.  While this winery is inland, I can picture the Maury River, running into the Agly, and out to the sea.  As this was a white wine, it was calling a bit for seafood.  We cooked up some mussels and had some crusty bread.  We also paired with bleu cheese stuffed olives, nectarines, capers, green apple, prosciutto (as I lacked any Jamon), goat cheese, almonds, and anchovies.

The color was a medium yellow, deeper than I was expecting.  The nose upon opening was heavy with petrol.  After being open a bit, it mellowed to beeswax and slate and carried apricot and stone fruit notes.  On the palate, it was dry with medium acidity and pronounced flavors of unripe peach, Meyer lemon, and lemon pith.  It was heavier than expected in the mouth, rich yet clean, with a long finish.  It is a wine that takes itself seriously.  Perhaps as it is a 2015, this adds to its weight and maturity.  Of course, the lees aging adds to the mouthfeel.  It retails at $25.99.

So, will I venture this way again?

Absolutely.  I am enchanted with the region, the snow-capped mountains, the lakes and rivers, and then the shore of the Mediterranean.  I will vacation here virtually, traveling in a bottle, any day of the week.  This was just a dive into one white wine.  With the variety of soils and microclimates, grape varieties and styles, there are many more wines of Roussillon to explore.

16 More pieces on wines of Roussillon by The French #Winophiles

I am lucky to be in good company. The posts below will give you more insights and perspectives on this region and its wines. You can also join us on Twitter for a chat on Saturday, July 18th. You can follow us using the hashtag #Winophiles. But if you have a comment we would love to hear from you, don’t be shy! The chat starts at 8am PDT

Need a place to stay in Roussillon?

I mentioned I have a friend whose parents own a magical place near Maury.  If you are heading to the area and want an enchanting place to stay, look up Villa du Parc in Prades  https://www.villa-du-parc.com/ And if you find you are in need of a Yoga Class while there my friend Anouck teaches in Perpignan. Yep…this is really a region I need to visit. In the meantime, I will close my eyes, sip a glass of Roussillon wine, and daydream of my visit. 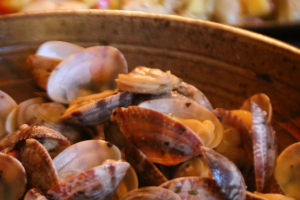 Steamed Clams with Butter and Herbs

I was going through our wine selection trying to find[...] 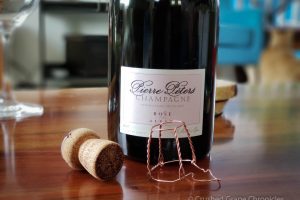 Farmer Fizz? An exploration of Grower Champagne with the French #Winophiles

Grower Champagne, Farmer Fizz it’s been called. Why do we[...] 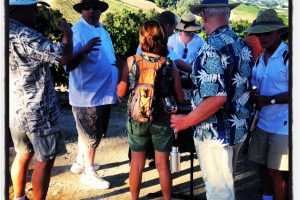 We gathered in the shade just outside the Tablas Creek[...]