I had the opportunity to go to a Sparkling wine tasting last month.  Michael doesn’t do the sparkling wines so off I went on my own.  The tasting was seated and set up like a class and I did my research ahead of time to brush up on sparkling wines and learn a bit more.  I was prepared to travel the globe tasting Espumante from Portugal, Cava from Spain, Franciacorta, Trento and Asti from Italy, some Champagne and Cremant from France and maybe even some Sekt from Germany or Austria!  This tasting however drifted only briefly outside of France with the start being a Cava, the well known Rondel.  Not what I was expecting, but pretty spectacular none-the-less and as a result I probably tasted a great deal more champagne than my ticket price allowed for! 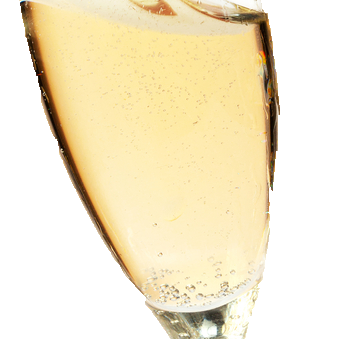 There are two methods of making Champagne or sparkling wine.  The first is the Methode Traditionnelle and the second is Charmat.  Let’s hit the 2nd first because it is quick and easy to explain.  In this method the Champagne is made in large tanks and CO2 is added to add the bubbles.  This method is used for less expensive sparkling wines.  The bubbles tend to be larger and “rule of thumb”, the larger the bubbles the bigger the headache.  These bubbles tend to disperse quickly also.  Now onto the more complicated method “Methode Traditionnelle”

The Traditional method “Methode Traditionnelle” is much more complicated and time consuming and therefore much more expensive.  After harvest the grapes are put in vats for the first fermentation which can be up to a year.  Then the wines are carefully blended and may be blended with previous years wines to create the house style.  This is known as assemblage.  The idea for French champagne makers is to create a champagne that is consistent from year to year.  After assemblage the liquer de tirage is added.  This mixture of still wine, sugar and yeast is what will trigger the second fermentation.  The wines are then bottled and capped (with simple bottle caps (anyone remember those?).  Then the 2nd fermentation begins and can take 10 days to 3 months.  After the 2nd fermentation the next step is Remuage.  The bottles are transferred to “pupitres” which are rectangular boards where the bottles can rest almost upside down.  This allows the lees and sediment to collect in the neck of the bottle.  A process known as “riddling “ is applied here.  Originally “Riddlers” would slowly turn the bottles, a bit of a turn gently each day to get all the sediment to settle in the neck, now there are machines that assist with this.  After the riddling the wine will be aged again on its lees for a minimum of one year for non-vintage champagnes and at least 3 years for vintage champagnes.  This aging allows the lees to breakdown which is what gives Methode Traditionnelle sparkling wines their bouquet and flavor.  But we are not done yet…you don’t want all that lees clouding up your beautiful sparkling wine!  The next step is Degorgement where the sediment is removed.  The neck of the bottle is put into a nitrogen solution to freeze it.  Then the bottle is opened and the solid frozen plug of lees is removed.  How in the world did they figure out how to do this?  Well for this tradition thanks the Veuve Clicquot.  Veuve in French is widow and Madame Clicquot’s husband died during the bottling process.  Legend says that she could not figure out how to get the lees out of the bottles and in her frustration threw them out into the snow, where….the necks froze first allowing them to easily remove the lees.  The final stage is to add more sugar and still wine to again fill the neck where the lees was removed.  This last “dosage” as it is called, determines the wines sweetness which goes from Brut to Sec.  Strangely enough, Extra dry is not as dry as Brut.  The Brut labels were added later to indicate a dryer wine.  So there you go the quick version of making Champagne.  It is a bit of work! 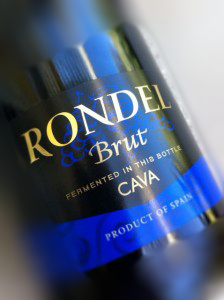 kay on to the tasting.  We began as I mentioned with a Rondel Brut Cava.

This is a great sparkling wine from Spain made in the Methode Traditionnelle.  It is lovely on it’s own or in mimosas and is exceedingly affordable at around $7.99 per bottle.  We tasted a Brut which was lovely, but it is also available in a Demi-Sec if you lean toward sweeter wines.  I picked up a Demi-Sec to take home for Michael to mix in Mimosas.

Our next wine was a Cremant de Bourgongne.  So…a little explanation.  As of 1985 the sparkling wine regions outside of Champagne in Loir, Alsace and Burgundy agreed to no longer use the term Champagne.  This would be reserved only for the Champagne region.  Instead they would now use the term “Cremant”.  Cremant de Bourgogne can by law only be made with  Chardonnay and Pinot Noir grown in the Burgundy region and must be aged for a minimum of 9 months.  The Cremant we tasted was a Louis Bouillot Brut NV.  This was creamy yet dry with a nice finish.  At $15.99 it is a great value.

Now we stepped into Champagne.  The first we tasted was a Paul Goerg Premier Cru Blanc de Blancs.  Goerg is names after a respected 19th century Mayor of Vertus.  The chalky soils of Vertus lend a refreshing mineral quality to this wine.  3 years of aging adds to the wine’s complexity.  I loved the bubbles in this.  The bubbles were very fine and refreshing and the bit of minerality made it very refreshing.  It also had a lovely floral note to the nose.  Blanc de Blancs means white from whites in French, and as such this wine is 100% chardonnay (a white grape).  This was the wine I took home with a sensible $29.00 price tag.

Our next venture was into Grower Champagnes.  Now I have been hearing about these and was anxious to taste one!  To give a little perspective on this style of Champagne it’s good to know that there are 261 Champagne houses in Champagne.  There are 19,000 growers.  So for a grower to produce a Champagne is a rare thing.  We tasted a Georges Vesselle Grand Cru Brut.  There are 17 Grand Cru Villages with 100% ratings, 38 Premiere Cru Villages with 90-99% ratings and the remaining villages in Champagne are rated at 80-89%.  The ratings are depended on the Village and the soil type there.  This changed the system from one where price was based on the Champagne house to one based on where the grapes were grown. This wine was a bit toastier and had a nutty creamy quality to it.  This particular grower is in Bouzy and it is a small production with 42 acres planed n 90% Pinot Noir and 10% Chardonnay.  It is a small family production.  This wine sells for around $40 per bottle.

The next wine was by the same grower and was a DeMargeire Grand Cru Burt Rose.  Champagne roses are like regular roses in that they can be made in two ways, you may allow the grapes to have contact with the skins early on to impart the pink color and some additional flavor or you may add pinot noir (or pinot meunier) in the final dosage.  This wine uses the former method and is a light salmon in color.  As with many roses you immediately get strawberry on the nose.  It had a lengthy finish and more than a little toast on the nose.  Roses are only about 3-5% of the Champagne Export so they are a little harder to come by.  This one retails at around $43.

From here we moved on to a Franck Bonville Grand Cru Vintage Brut. (I know there were a lot of wines to taste!).  This estate consists of 50 acres in the  Cremant, Aviz and Oger areas which are all classified as Grand Cru.  It is 100% Chardonnay and was aged for 5 years on it’s lees before release.  This was heavier on the yeast and had more light fruit.  It was medium in body.  More complex than the previous wines.  It goes for $49.99

The last of our dry Champagnes was Mailly Exception Blanche.  This wine is 100% Chardonnay.  This champagne will be great through 2022. It has flavors of tangerine and almond with a hint of minerality.  The bubbles are fine and the texture smooth.  This lovely Champagne will set you back $70.

Our final taste (well of Champagne) was a Mailly Delice Demi-Sec Grand Cru.  As a Demi-Sec it is sweeter so we finished with it.  It is 75% Pinot Noir and 25% Chardonnay.  It is a blend of the latest harvest with 40% being 10 years of reserve wines.  It is aged 2 yeas more on the lees than the Brut NV.  The extra aging makes this a fuller champagne.  It runs around $45 per bottle. 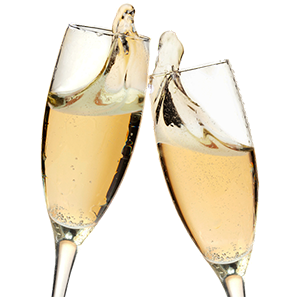 We finished the night with some Georges Deboeuf As it was the 3rd Thursday of November and officially Beaujolais Nouveau day!  This seasons had hints of grape candy to me.  Reminded me of the tart smell of the Lik a Stik powdered candy.  Fun and fruity it is a gulping wine!  What a down to earth way to end the evening of sipping Champagnes!

So…I have a new understanding of Champagnes.  Time to make some Bellini’s and Caviar!  And Champagne and sparkling wines go with everything, so…If you don’t know what wine to take to that Thanksgiving dinner… pick up something with bubbles (smaller bubbles to make your head happier) it will go with everything and is bound to bring a smile! 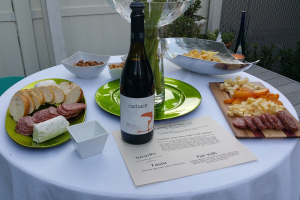 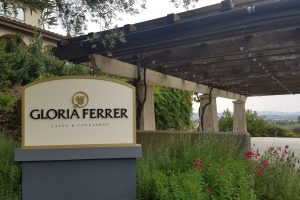 On our recent trip to the California Coast we had[...] 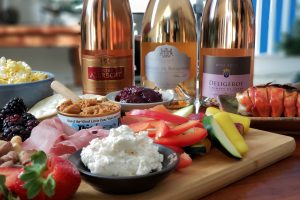 ‘Tis the season for a little celebrating and nothing gets[...]