Red Wine Social. It’s organized chaos. Go ahead, look at the video first and see what we are up against! 10 wineries, 5 minutes each. For them: 5 minutes to give us the elevator schpiel on their winery and wine and pour for a table of 5 to 10 people. For us: 5 minutes to get photos, details, hashtags, taste and post on social media! Are you friggin’ kidding me! Watch the vid…

Did you have time to read the descriptions? Nope? Well I barely had time to write them!!!! (Yes, my voice was raised a bit on that last sentence). I did my posting on Instagram under #wmc19 (at least I think I got them all in!)

Okay…now time to give those wineries and winemakers there due. Here is the breakdown with more details than 5 minutes will allow.

“Greg from First Creek wines poured2017 winemakers shiraz! They deal with 300 tons of fruit a year. Of course they do around 300,000 in contracted fruit for others. @huntervalley @visitnsw”

Ok…let’s break this down. “Greg” is Greg Silkman. He oversees all of First Creek’s business. Greg was honored in 2019 with the Hunter Valley Wine Legend award (you will hear more about the Legends). He and a business partner bought Tambulaine winery back in 1986 and turned the place around. He then established First Creek Wines.

First Creek Wines is family owned and operated (go to the about us page on their site and you will notice many members of the team are Silkmans). They do around 300 tons of fruit each year to make their own wines, like the Winemaker’s Reserve Shiraz we were tasting. They are also a custom crush facility First Creek Winemaking Services, and it is there that they handle around 300,000 tons of contracted fruit for other wineries.

What?! Okay, here’s the translation of that criptic IG post.

So Mike De Iuliis made this Shiraz and was experimenting to create a bit of elegance. This is 80% Shiraz with 20% Touriga National which adds complexity and lifts the aromas of the wine. He said that aromatically he finds Touriga to be the “gerwurztraminer of reds” (gerwürztraminer is a German white wine well known for it’s aromatics).

We were lucky enough to get to know Mike a little better on the Dinner excursion on Friday night as he took our bus all terraining into a vineyard under threat of rain to meet a bunch of winemakers with their semillons and oysters. You’ll get more on that later.

LDR? That is the Lovedale Road Vineyard where they have 3.5 acres of Shiraz and 1.5 acres of Touriga National planted. You get cherry, and blackfruit with spice on the nose and plum, blackberry with soft tannins on the palate. This wine drinks well now, and will age for at least another 5 years. The wine sits at 14% abv and SRP is $40 au. (James Halliday gave it 95 pts)

My note on this was

“One of the most beautiful views in the country! This shiraz was beautiful! #wmc19 @huntervalley @visitnsw”

Well I had a chance to chat with Daniel Byrom from Audrey Wilkinson the night before and learn all about their amphitheater shaped vineyard and the varied soils. We also got out to get some sunrise shots. They really are well known for their views. Locals tell us that even if they can’t go for a tasting, they always take friends and visitors for the view.

This wine is an award winner “97 points, again….” says their brochure. This wine takes it’s name for the large spring fed dam on the property. 2017 they recorded the hottest year on record (we’ve talked about climate change right?). In the Hunter Valley this was a great vintage. This wine has a nose with florals (violets?) and fruit with a bit of spice. It sits at 14.9% abv (holy crap!) sees a bit of French oak and will set you back $120 au a bottle. This is a definitely a reserve wine for this winery.

“Alex one of the winemakers at Briar Ridge #wmc19 @huntervalley”

Oops! Didn’t get much out with that one. But I did get a bottle shot and a photo of Alex.

We did however have a few minutes afterwards to speak with Alex about Briar Ridge. You will have to wait until later for that.

The winery is located in Mount View in the Southern part of the Hunter Valley and they are the largest vineyard holder in this area. Soils here are red limestone. They keep yields low (1 to 2.5 tons per acre).

This wine is single vineyard on a SE facing slope with a warm maritime influence. It was 20% whole cluster with the remainder crushed and destemmed. It ages in 500liter large format barrels for 12-14 months with a couple rack and returns. Then they hold it 3 years before release. We were tasting the 2018. If you go to their website, the current release is 2014 (which recieved 96 points from James Halliday).

Okay, I was typing fast, I harkened back to the previous conference name (wine bloggers conference wbc). But let’s get on with the details on this winery. 1813? What does that mean?

1813 was the year the first coin was created in Australia. It was called the “Holey dollar” because it was a Spanish coin with a hole in the center. The owner of the winery has a finance background.

2017 The Governor Hunter Single Vineyard from 1813

“This wine won a trophy for the best shiraz in the Hunter Valley. This is a 2009! @huntervalley @visitnsw #wmc19”

Okay…Wombat Crossing? You know right off that they are an Australian Winery right? Click through to their page…go ahead…now you know that they are also Beatles fans! LOL!

Ian Napier is the vineyard owner. He came from a successful career in Sydney and post career decided to open a winery. Their first vintage was 2005. They are the smallest vineyard and winery in the Hunter Valley and plan to keep it that way.

The winery shows it’s support for the Cedar Creek Wombat Rescue & Hospital. Driving rural inland roads we saw many dead kangaroos and wombats. This rescue helps orphaned joey wombats and gives medical attention to adult wombats who have been injured. The roadsides have signs to call if you hit wildlife. Wombats are declining due to road hazards, loss of habitat and disease. Roz Holme founded the rescue and treats animals that might otherwise have been euthanised.

Ian brought us a 10 year old Shiraz to taste and see how well the wine ages. The 2009 vintage from Wombat Crossing one the trophy for the best Shiraz in the Hunter Valley. they have just 8 cases left (7 now!) They believe in cellaring and holding back wine. He told us that the current release was their 2014.

Okay…this is not the photo that was on IG, but there is a link below so you can see that.

Our video as posted on IG

This is another blend of Touriga and Shiraz (like Mike de Iuliis). Great minds thinking alike. We did have a chance to speak with Susan after the event…again…you get that later!

Whispering Brook is located in Broke on the West side of the Hunter Valley. The property is bordered on one end by the Wollombi Brook and it is from this that the winery takes it’s name. They make Sparkling wines in addition to their Shiraz, Chardonnay and Touriga National as well as olive oil.

This wine received 97 points from James Halliday. There is a bit of a story to this wine. In 2008 they grafted over 1 block of their Shiraz to Touriga National. In 2017, they had just pressed the Touriga, when the Shiraz came in. The Touriga skins looked great, so they tossed them in with the Shiraz. They did a wild yeast ferment, which is not normal for them (well, she did say that there was probably still cultured yeast on the Touriga Skins). This wine ages in 30% new french oak for 16 months.

Well that didn’t say much! Guess I was getting tired by then. (this was exhausting, trying to do so much so fast!)

Tyrrell’s is a 5th generation winery that can trace it’s roots back to Walter Tyrrell who arrived in England with William the Conqueror! Last year in 2018 they celebrated the 160th Anniversary of the founding of Tyrrell’s Wines!

We had an opportunity to get out to the winery and taste and will share more on that with you later!

2017 was a good year in the Hunter Valley. This wine is in their “Hunter Valley Range” an affordable range at $25 au per bottle. Vines here average at about 50 years old and the wine is aged in large format Foudres (2,700 litre). They did bring a jar of soil so we could see the red soils from the vineyard.

Tulloch Wines is one of the early wineries with 122 years and 4 generations of winemaking experience. Tulloch went through a bit of time where the vineyard was owned by other companies, and even a short bit (8 years or so) without a member of the family being part of the operation. In 2003 the family bought the brand back from Rosemount and is now again family run.

“The 1st vineyard in the Hunter Valley to plant Sangiovese 25 years ago! Bob and James Lusby poured it for us! #WMC19 @huntervalley @visitnsw”

Tintilla. The name is an Old World term for red wine. Bob Lusby sat down next to me while his son James poured. It was their last table, and our last winemaker. So yes, Tintilla was the first vineyard in the Hunter Valley to plant Sangiovese 25 years ago. They pulled in the Davis clones.

While we were talking Bob mentioned the idea that more phenolics in the grapes keep pests away. I was fascinated by this and he suggested that I read some of the work by Dr. Richard Smart, including his book “Sunlight into Wine – A handbook for winegrape canopy management”. Looks like I have more fascinating geeky wine reading to do!

The Saphira Sangiovese gives you plums and cherries with a bit of earth. It runs $35.00 au.

Harvested in the early morning, the cool grapes were destemmed and passed through the crusher The resultant must was cold soaked, fermentation followed in open vats, the temperature controlled to about 22 degrees C. Hand plunge of the cap ensured good mixing of the skins with the juice. The wine was aged in 20% new & old 300L French oak barrels for 12 months.

Oh yeah. We did a white/rosé tasting like this also. You’ll get that later. 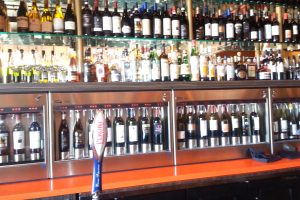 Due Forni – So much more than a pizza place

In searching for great places to enjoy wine and food[...] 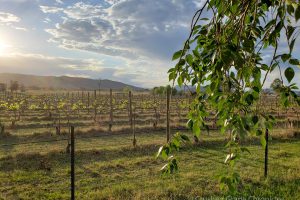 During #ouraussiewineadventure in October we traveled to the Mudgee Region[...] 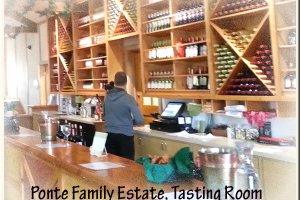 We visited the winery earlier this year in February (see[...]