Larry is the President of the Santa Barbara Rhone Rangers Chapter, so he is obviously into Rhones. He is passionate about his wines and if you catch him in the tasting room or at an event, you are in for a Great conversation.  We had a chance to speak with Larry last year at the tercero tasting room, here’s a snippet of our conversation about Rhones. https://www.crushedgrapechronicles.com/terceros-larry-schaffer-love-rhones/ 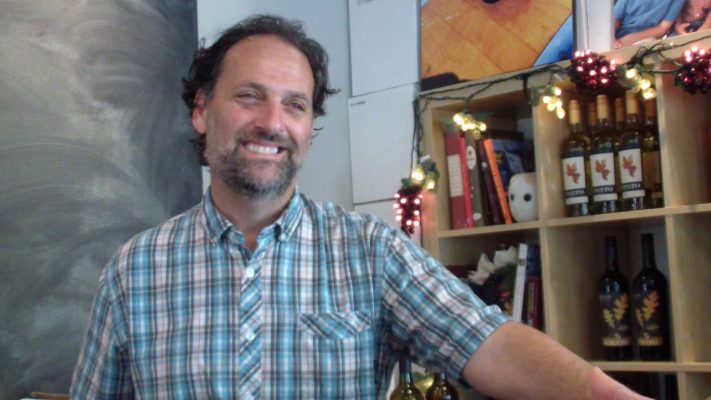 Larry sources from Vineyards all over the Santa Barbara area but today he spoke specifically about the Syrah he gets from White Hawk Vineyard.  He tells us about the vineyard and it’s soil, the 2011 vintage, how he makes this wine, as well as giving us insights on why Syrah is currently such a great value.  Below you will find the video and transcript from the Syrah Seminar.


White Hawk is located in the Los Alamos Valley on the East side of Highway 101. It is in Cat Canyon in the Northern part of the valley East of Cat Canyon Vineyard. The vines here work extra hard because the soil is so sandy, cuasing low yields and intense berries. It sits at around 900 feet elevation, and the south facing slope gets lots of morning fog. 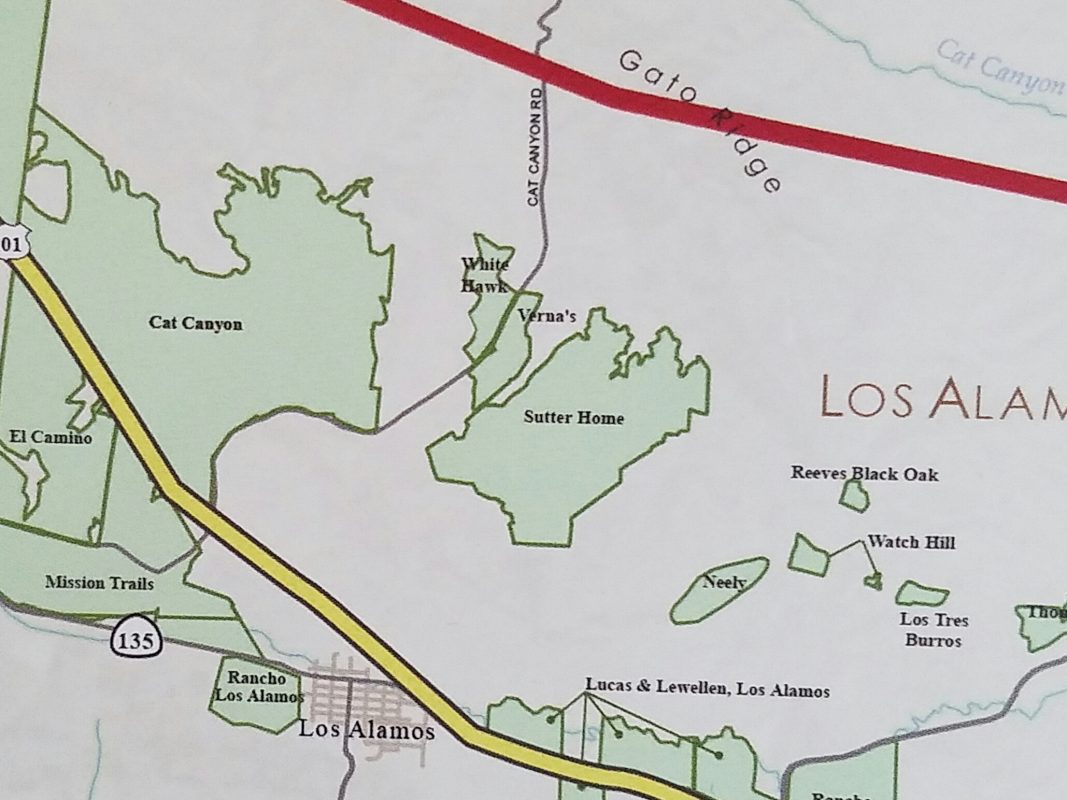 This 75 acre vineyard is mostly planted in Syrah with a little Chardonnay. The vines here are custom farmed for the many wineries who source fruit here, including: Herman Story, Longoria, Silver Winery, Wild Horse, Sea Smoke, Sine Qua Non and Andrew Murray, in addition of course to the two wineries pouring Syrah here today, tercero and Central Coast Group Project.

For more on Larry and tercero visit http://www.tercerowines.com/

His tasting room is in Los Olivos where you can find Mae Apple pouring his wines Thursdays through Monday 12 to 5 ish or by appointment.

You won’t find tasting notes here. They encourage guests to discover the flavors without being “lead”. 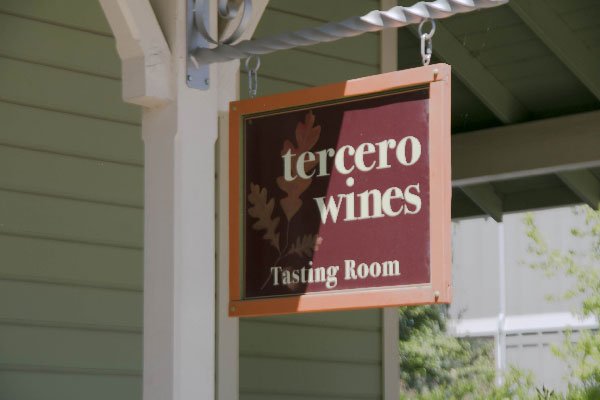 Wendy Thies Sell (WTS): Alright, our next area to visit is Los Alamos, home to White Hawk vineyard. We will taste 2 wines from Whitehawk. First up is tercero’s 2011 White Hawk Syrah.   Wine maker Larry Schaffer studied viticulture and enology at UC Davis. He began his career as the enologist at Fess Parker Winery, before starting his own winery tercero. Larry’s focus is Rhone variety wines and he told me that his goal with every wine is to have it be a transparent look at that vineyard, that vintage, that variety or blend. Larry, thanks for being here and tell us about this wine and working with White Hawk Vineyard fruit.

Larry Schaffer:  Well, thank you Wendy, and I want to thank all the other panelists, and thank all of you guys. It’s always a pleasure to have a number of people in a room talking about Rhone varieties. It doesn’t happen often enough. Before I get into this specific wine, I do think it’s important to give a nod to those that came before us and have really created the ability for us to be sitting up here, talking about these; definitely Bob Lindquist. I think, when you make wine you kind of think “I’ve arrived. I’m able to do what I want to do because I’m here” but really the only reason we’re here making Syrah is by the fact that people before us worked with this variety through thick and thin and have continued to work with this variety. People like Craig Jaffurs, people like Joey Tensley, Doug Margerum, Bob Lindquist and all the folks at Zaca Mesa. So I just kinda want to give a nod to all of them.

So my wine is my 2011 White Hawk Syrah. This is actually a future release. I kinda share the same, some of the same ideologies as Michael Larner in the fact that I like my wines to stay in oak for a long time. So 2011 was a really special vintage. I remember talking to winemakers up north, and by mid October they had picked everything. They got hit with massive rains. It was also a frost year so crop levels were quite low. But as the panelists before me were saying, when it rains in Paso and north, if it rains two inches, we might get a half an inch. We don’t get a lot of rain and one of the great things about Syrah, the clusters tend to be long, they tend to be relatively loose and any wind after a rain as long as its not humid, they’ll dry out, we’ll continue moving forward. So in 2011, I picked these grapes on October 28th, which was relatively late for this vineyard. I started working with this vineyard in 2010. In the one-acre block that I was working with, I got two and a half tons in 2010, in 2011 I got less than one. So I did not have to go through the vineyard like Chris and Trey and knock all the grapes off, there just wasn’t a lot of grapes there for me to work with. I brought the grapes in, partial whole cluster in the bottom of my fermenting bin and then crushed on top of that, cold soaked for a couple of days. I made this wine at Andrew Murray Vineyards production facility and it was a very cold year so the ambient temperature in there was really cold. I waited for about 4 or 5 days for it to kick off and then I inoculated. It was about a 2 week fermentation, manually punched down 2 to 3 times a day, pressed and settled and then barreled down to 3 to 7 year old French Oak barrels. Oak is not a bad thing and I agree with Chris. I personal don’t use new oak, I’ve never used new oak on any of my wines. The newest oak barrel I’ve ever used on my reds is 3 year old oak. I like everything else to shine through and the oak to be in the background. But that’s not to say that oak is a bad thing, I’m not saying that. So again, a cool vintage and what strikes me about this wine, is the acidity. There was great natural acidity in 2011, because of how cold the vintage was all the way though. And I think with Syrah especially, but with all red wines, I think acid is kind of the key to the longevity of it, the liveliness of it. One, more acid is going to mean a lower pH, it’s going to mean that that wine is going to stay fresher longer. The other thing, I don’t rack my wines, so this wine stayed in older French Oak for 30 months. So after it was put into barrel, it stayed in barrel. I topped it, I SO2ed it, but I did nothing else to it until right before bottling when it came out of barrel. By doing that theoretically I keep the wine tighter. You imagine if you take a wine out of barrel you’re decanting the wine. You’re going to move it into a different trajectory. It’s not a better or worse thing, it’s just different. I want to keep my wine as tightly wound as long as I can so that when it gets into bottle, it starts its aging process, because I will keep my wines in barrel for a couple of years and normally in bottle for a couple of years before releasing. Enjoy! Thank you.

WTS: Larry told me that for the price there is no better value in red wine, in California than Syrah. Tell me more about that.

Larry Schaffer: Without a doubt. I mean if you think of the fact, so a couple things. One, and Chris kind of alluded to this, Syrah is a relatively new variety in this country, compared to many other noble varieties that people drink. The first variety labeled Syrah in this country was in the mid 70’s. That’s not that long ago. A lot of the plantings that we’re tasting today were planted 20 years ago and less. And a lot of that is really…it stems from the fact that even in the Rhone, even in the Northern Rhone, the wineries we are talking about like Chave, those wineries were not known in this country very well until the 80’s and the 90’s, when reviewers like Robert Parker started really talking about that region. People had talked about Bordeaux, people had talked about Burgundy, had not really talked about the Rhone. So the Rhone region as a whole, Rhone varieties are still relatively new in this country. But in terms of value, you can certainly spend more than 35 or 40 dollars on a Syrah, you don’t really need to, to get a tremendous wine. And that’s throughout Santa Barbara County and really throughout the state of California and even into Washington. There are places where the prices are going higher than that, but Syrah, really both in Syrah and Syrah blends, offers great value in all different kinds of styles,not cooler climate or warmer climate per se, but everything in between. Because Syrah is a bit of a chameleon, it will grow well anywhere and it really comes down to site and winemaker in terms of determining style, in terms of how ripe they want to get those grapes and how ripe they want to make that wine.

Larry Schaffer: It is. I’m gonna let this guy next to me talk a little bit more about it, but it is sandy, it was planted in the 90’s. I believe Benjamin Silver of Silver Wines assisted in the planting of it. Similar to Larner, which I also get fruit from, it’s chalky sandy soil. If you drive up the vineyard, you better have a car that can get you through the sand and back down or else you’ll be stranded. It really is amazing, your feet kinda sink in. Because of that I tend to find the grapes have a lower pH higher acidity and lower yields naturally without them having to do too much to the vineyard. The vineyard was planted again in the mid 90’s, planted to a number of different clones of Syrah and that’s what Scott’s going to talk more about.

WTS: Thank you Larry. Larry has a tasting room in Los Olivos. 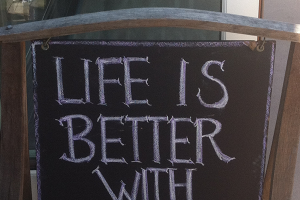 Life is better with WIne 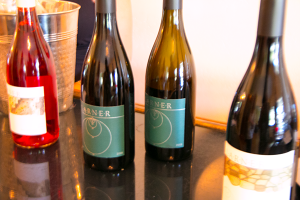 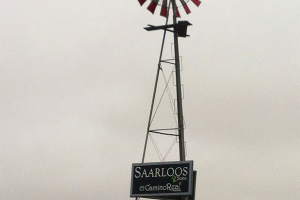 Ballard Canyon is the newest of the AVA’s in Santa[...]