Ariel Eberle is a native Oregonian, and the founder/winemaker for A Cheerful Note.  She spends her days as the winemaker for Yamhill Valley Vineyards, so you would think she would have been a shoe in to the wine industry, but she came the long way around to wine making. 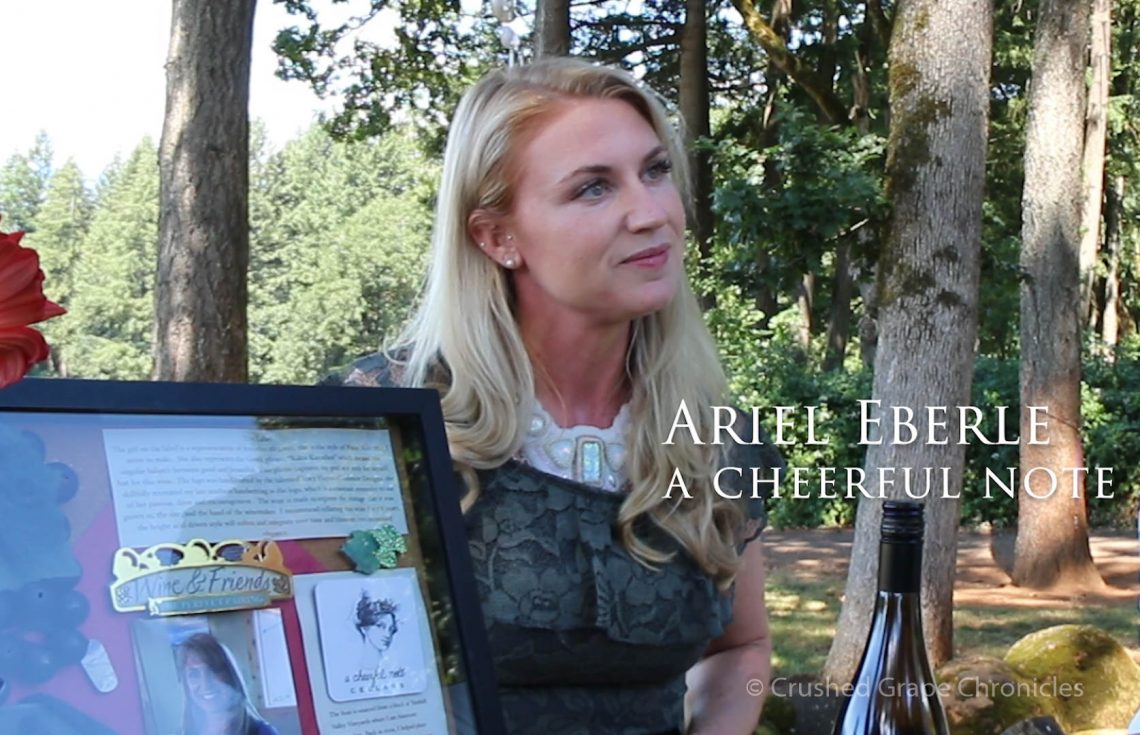 Ariel’s background is in biology and chemistry from Oregon State, where she was Pre-med, and working at a hospital and a clinic.  It wasn’t clicking.  Looking for adventure she ended up in Korea teaching English.  They say absence makes the heart grow fonder, and so it was for her.  She found herself missing and appreciating Oregon. Having always been drawn to vineyards, where the wild bits of nature are set into an organized fashion, she looked that direction.  The aesthetics appealed to her.  She applied at Yamhill Valley Vineyards and did a harvest with them.

“I didn’t have any wine making experience at that time. But I met with their then winemaker, Stephen Cary and I said, I’m a quick study and I’m interested in this and I’ll work hard.  He hired me on and I am now going to be celebrating 10 years with them in October.  I’m now their head winemaker.  So that’s how it happened and the rest is history.”

Ariel started at Yamhill in 2008 for harvest and the next year it was decided to plant the last plantable place on the site.  Te area was a really high slope at the top of the vineyard.  So right at the top of her time with Yamhill, she helped to plant this vineyard.

“There’s a huge sentimental connection, when you crawl around on the ground and you’re with your crew.  We put those babies in the ground together and 2013 was the first year that came off of that.  I could have worked with different fruit from our site, we are all estate there, but I wanted to work with that site because the one thing that I was lacking with my experience at Yamhill was the ability to grow with a vineyard, because the rest of our vineyard is so well established. So, this was my opportunity to kind of see a vineyard come from it’s infancy and go through the same stages that people go through, that awkwardness through their adolescence and learn those lessons along the way.”

The 2013 A Cheerful Note Pinot Noir 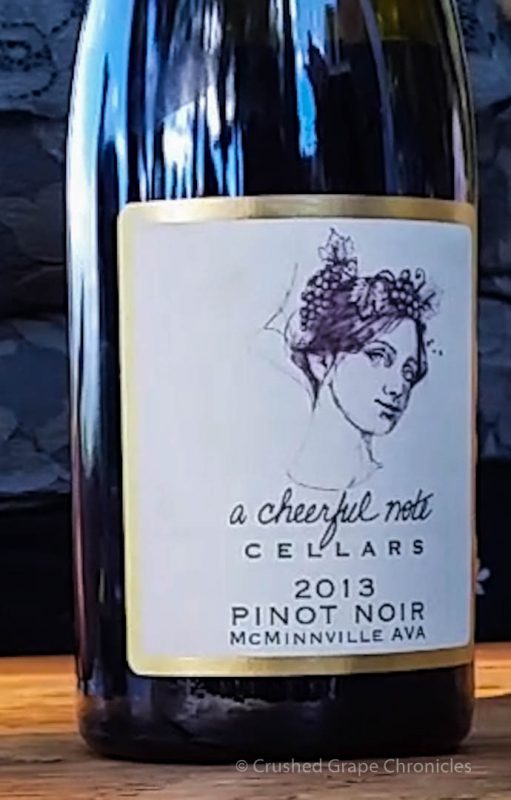 Lucky for us, it was the 2013 vintage that she was pouring, because it is her favorite.

“A funny thing that happens with the vines so far, is that in their infancy they show really well and then they kind of go through that awkward phase.  So I would say that probably the 15 vintage is the one that I struggled with more, just because there were some heat spikes during that year so a little more acidity, kinda let it age a little bit longer, and I decided to bring the 13, it’s just showing really well it’s a very acid driven site, so it’s benefited from the bottle age and I’m really happy with the direction that it’s gone.”

If you have tasted Yamhill Valley Vineyard wines, you will note that these are made in a different style.  Her gratitude for Yamhill indulging her in this side project, and allowing her to make this wine at the winery is evident and she chooses to make this wine differently so as not to directly compete or imitate the Yamhill wines.

To keep this wine different, she does 10 to 30% whole cluster, a different yeast selection and pump overs instead of punch downs.

“It’s it’s own little bin that sits in a sea of Yamhill bins and the things that I do differently are I do whole cluster, depending on the year, it will be between 10 to 30% whole cluster,  This 2013 was 20% whole cluster because it was a little bit of a cooler year so we didn’t want to get too much extraction of stems that are not lignified,  so it was really careful selection of what was going in as the whole cluster component.  But those lignified stems really contribute a very woody character, almost like a barrel would contribute with some of the same spicy characteristics that a barrel can contribute, but I’m actually aging it in neutral oak barrels.  So, a lot of people get vanilla and different unique characteristics that are associated with barrel, but it’s a neutral oak barrel.  That was intentional, because I didn’t want to overwhelm that fruit and just see what that fruit was that first year.

I also use a different yeast selection, so I’m using a 3001 yeast and that really highlights the fruit characteristics.  You get a lot more of the red fruit and the brightness, than what we use at Yamhill, which tends to be what I refer to as more masculine flavors, a lot more spice, earth those kind of components, whereas this tends to be more fruit forward.

And then we are also doing pump overs instead of punch downs.  So really gentle on the fermentation, good at extracting color but not over extracting  the skins and the seeds and just being gentle, getting it mixed up but letting it do it’s thing and tasting every day and deciding, where’s that sweet spot.”

As I stuck my nose into the glass, I mentioned how you really do get that cinnamon on the nose, and she gave me some great insights into on the crazy things we smell in wines and the difference stem inclusion can make.

“Yeah it’s interesting that all those flavors come from the grape itself and I just find that so fascinating.  Especially with the invent or the application of high pressure liquid chromatography (HPLC) they can actually go in and sample the fruit or sample the wine, measure different chemical components and constituents that are actually that blackberry flavor or that cinnamon flavor and it’s this graph. So it’s not just in our heads, it’s there and it’s from the skin of the grape.

I love that you can utilize the stem and get those cinnamon and other flavors without having to add that through the barrel aging.  It’s a whole different component.  And then it also offers you some whole berry clusters and what that does for you is it gives you that carbonic masceration, which gives you that nice, lifted, bright, juicy confectionary kind of style.  But it really helps to give you that complexity.”

The stories behind the label

A Cheerful Note’s wine label is filled with stories.  The name itself comes from an adorable love story…

The name “A Cheerful Note”

“The name “A Cheerful Note” was inspired by a fortune cookie. My partner and I started dating 2013 and he lived in The Dalles and I was here.  I was actually living in Tigard at the time.  He opened a fortune cookie and it said “A Cheerful Note is on it’s way to you.” I was going to visit him that weekend.  He took a picture of it and sent it to me. We had bottled our Pinot Gris at Yamhill Valley without labels, we were going to label it later. So I took one of those bottles to give to him and I put a little sticky note on it that said “A Cheerful Note” to make the fortune come true and the name just stuck.”

The font that is used for “a cheerful note” is based on her mother’s actual handwriting.  She dedicated this wine to her mother who passed away in 2012 to melanoma (she reminded me to wear my sunscreen as I was pink from being sunscreen free the night before watching sunset). 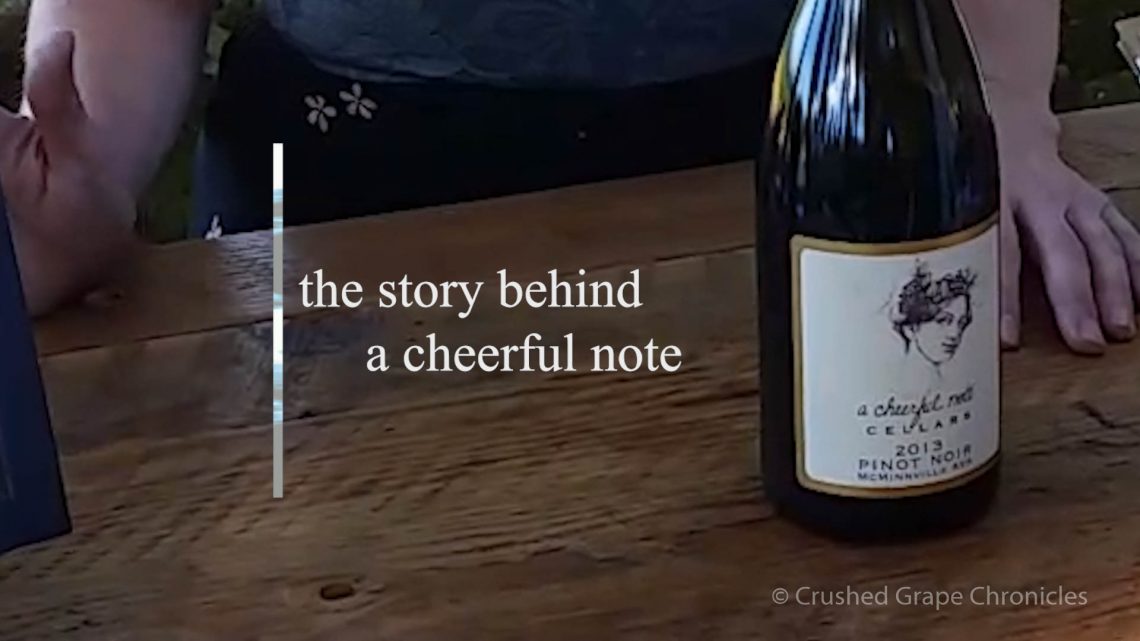 “I wanted to dedicate it to her and have it be a reminder of her, because she was always so supportive and told me I could do anything. Even when making wine back in 2008 was really a challenge, she was really supportive.  So that’s her handwriting.  She actually did write this, because I told her about the idea, but I couldn’t find the paper, so I had a graphic artist take her journal and piece together her handwriting from the journal and was able to make this in her perfect handwriting which her handwriting is just beautiful.”

The girl on the label

Yep there’s more, artwork of the girl on the label was done by Tracy Hayes, an artist and graphic artist in McMinnville. 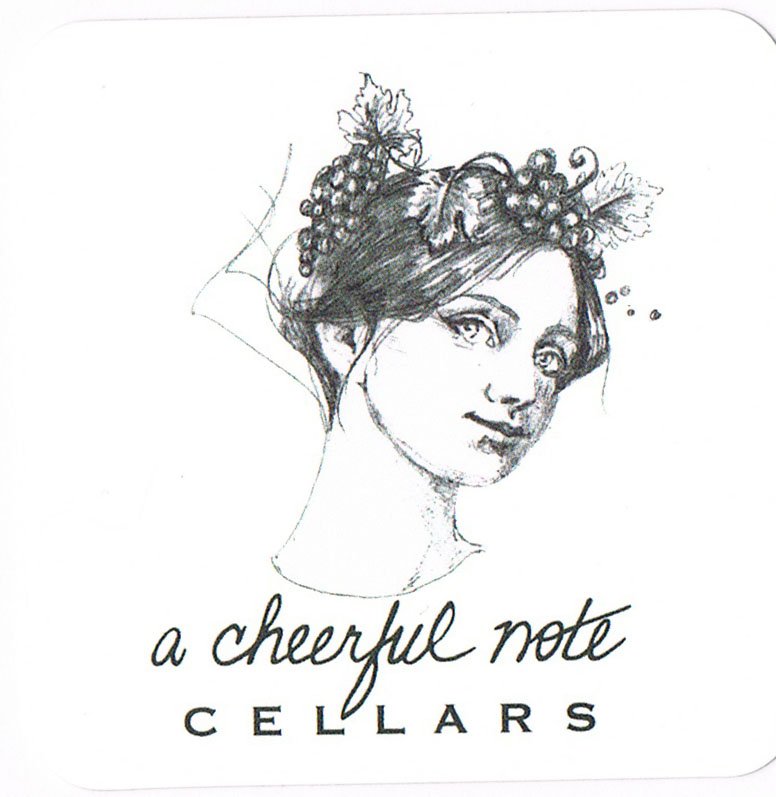 “We worked together, she drew this and what it represents, is what’s in the bottle.  So I talked a little bit about masculine verses feminine flavors in wine and if you were to anthropomorphize the wine and give it human traits, this is the girl, this is the wine itself, very elegant, very classic So that’s what she is, she is the embodiment of the wine.”

The back label, a way to give back

The last story on the label is on the back.  The logos there represent the way Ariel gives back. 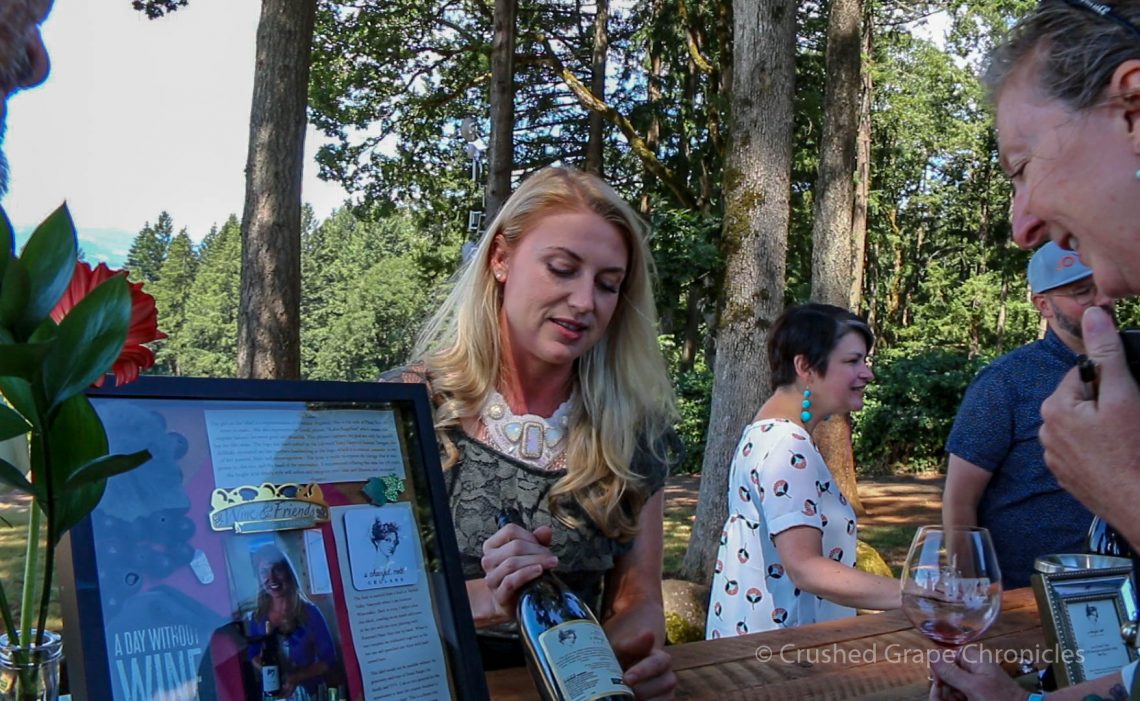 “So I had an ethical dilemma about 2 years into making wine because I was like “I’m making booze for a living”, what am I doing?  What am I giving back to society?  With Yamhill I had partnered with a non-profit and done some fundraising with them.  I had a great experience and ended up donating 10% of my profit to Boys and Girls Aid Society, so they are right in Portland and they have been around for over 130 years.  They basically help children find their forever homes.  They give them therapy, because a lot of them have been through the foster system, so they help them to be able to have trusting relationships with adults again.  They have an afterschool program, some of them stay at the facility there. I just fell in love with what they do and now it makes me feel better about what I do.”

For more information read our piece on the Uncommon Wine Festival, with our interview with Dave Pettersen the Winemaker and CEO of Vista Hills who founded the event, and check out another interview we did at the festival with Ryan Pickens of Esther Glen Farm and Winery. We look forward to bringing you interviews and discussions with all of the winemakers from this event, as well as details and visits with wineries in each of the Willamette Valley AVAs.  So check back here at Crushed Grape Chronicles  and don’t forget, you can also find us on Facebook, Twitter and Instagram