Can you believe we didn't finish this last night?

Bubbles to brighten my day, as we caught bits of A

Today’s Sun Basket dinner was an easy, “heat and eat” Butter Chicken and Jasmine Rice supper. I went to research pairings for Butter Chicken, and came across this great post by Madeline Puckett. On Madeline’s site, Wine Folly, there was a piece called “Pairing Wine with Indian Cuisine”. Madeline suggested pairing Butter Chicken with Lambrusco and I was sold! This pairing seemed wacky and wonderful to me! On top of that, with our #travelinabottle series, I now had the opportunity for a virtual visit to this region!

The Emilia-Romagna Region is in the Northern half of Italy.

Emilia-Romagna is shaped like a triangle. It stretches from the Adriatic Sea almost all the way across the peninsula. As a result of this central location, its edges border more of the other Italian regions than any other. Six in all. To the north along the Adriatic Sea you find Veneto. South you find Marche. To the southeast, it shares its longest border with Tuscany. Directly west is Liguria, with a tiny strip of the Piedmont above that. North and west is Lombardy. Lombardy, is the other region where you can find Lambrusco.

Topographically, the upper portion of the region is in the Po River Valley. The Apennines follow it’s southern edge. The capital of the region is Bologna. As you travel northwest from there, you pass through Modena, famous for it’s balsamic vinegar. This region is rich in gastronomy. For example, Parmigiano Reggiano hails from Emilia-Romagna, as well as pork based meats like proscuitto, panchetta, coppa and salami.

So is this a grape? Yes, well, it is actually the name of a group of grape varieties. They have identified more than 60 at this point. The most prominent are those that have their own DOC’s: Lambrusco Grasparossa di Catelvetro DOC, Lambrusco Salamino di Santa Croce DOC, and Lambrusco di Sorbara DOC.

Lambrusco Grasparossa di Catelvetro DOC is the DOC we will focus on today, since that is where our wine hails from.

This wine is produced from the Lambrusco Grasparossa variety. Although not possessing great vigour, the vine is distinguished by a special characteristic: with the arrival of autumn, not only the leaves turn red, but also the stalk and pedicels.

…The sparse, conical-shaped cluster is medium in length with roundish fruits. The grapes range from plummy dark blue to blackish, have a thick skin and contain a medium juicy, sweetish, slightly acidulous pulp.
Due to its lack of vigour, the Lambrusco Grasparossa vine is best cultivated in smaller vineyards, where it does well, even on rather poor soils, such as those on the lower slopes of the Modenese hills.
It bears up well to climatic and other adversities, and matures fairly late, after waiting to capture the very last rays of autumn sunshine (years ago, harvesting went on well into November).

This is the smallest wine producing region, located south of the town of Modena. 85% of the wine must be from lambrusco. The most tannic Lambrusco hails from this region.

Now we dive into the actually winery. This winery and it’s history are part and parcel of the story of Lambrusco itself. Cleto Chiarli, owned Osteria dell’Artigliere, a restaurant in Modena in the mid 19th century. As most osteria owners, he made his own wine to sell. He made the wine, of course, from Lambrusco. His wine was so popular that in 1860 he founded Cantina Cleto Chiarli, Emilia-Romagna’s first wine producing company.

The family watched the wine become an international phenomenon. They pioneered the “chamant” or tank method of production. Before this, all the wines had been made in the “ancestral” method. This created fizzy, dry, cloudy wines that had been bottle fermented. The charmant method, allowed them to filter the wine. Now the wine would be clear and they could add more pressure to increase the fizz. It also allowed them to retain residual sugar.

In 2000 the company formed Cleto Chiarli….Here’s what they had to say. Keep in mind this is translated from Italian.

A century and a half of wines, the same family, millions of bottles produced, appreciation all over the world, desire to do better and better.

Thus, in 2000 Cleto Chiarli was born: more than a cellar, a project of a world where the ideal wines are born, the perfect cradle where the owned grapes can give their best.

Modern structure, adequate technologies, in an environment where you can always breathe history and tradition.

Clelto Chiarli presses grapes traditionally and mascerates them on the skins for 36 hours, giving it that lush purple color. The pressure causes it to have a lovely purple froth on the edge when poured. It is rich and sweet and fizzy in a rich velvety way.

Was this a crazy pairing?

Okay…yes, as you look at it, it might seem crazy. This deep purple frothy wine with a creamy spicy Indian chicken dish? Madeline suggests that the creme in the dish allows it to pair with the a deeper, more tannic red wine. After tasting, I agree! Also the sweetness in the wine perfectly tempered the heat in the dish. The tart fruit notes tied in with the tang of the dish and elevated both.

On the other hand, Michael liked both the dish and the wine very much, but he did not like them together. I guess it’s something you can try for yourself and see. Opinions evidently vary!

Want more on Emilia-Romagna and Lambrusco?

You can also read some pieces where we’ve tasted a bit of Lambrusco before:

Have you been doing a little #travelinabottle? Share with us the place you have visited in person, in memory or virtually! 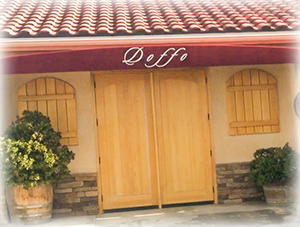 I love to research wine country.  Before a trip my planning stages can take more time than the trip itself.  I’m a bit obsessive about this.  Now don’t think that I’m also a control freak.  I tend to also build in multiple options and once we are in wine country I go with the flow.  Well in my research, one of the wineries that I have really wanted to stop by was Doffo. Last year when we were in Temecula they were only open for tastings on weekends, so they were a definite stop on my list this trip.

Doffo is a family owned winery that is almost the last winery as you head east on Rancho California Road in Temecula.  This is a newer winery that was founded in 1997 by Marcelo Doffo.  The family decends from Italians who immigrated to Argentina in the early 1900’s.  Marcelo grew up on his grandfather’s farm in Pampas Argentina.  In the 80’s he traveled to Italy to the northern part of Turin and found his great uncle still making estate wines.  In 1997 he bought the property in Temecula. The logo is an homage to the schoolhouse that used to be on the premises.  If there is one thing Marcelo loves as much as wine it is motocycles.  Be sure to stop by on weekend mornings to get to see the MotoDoffo exhibit in the barrel room. 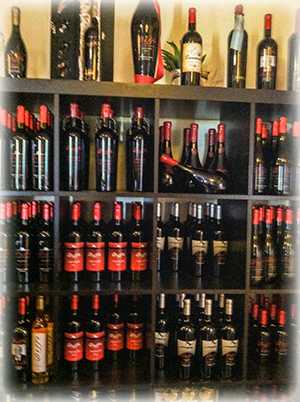 We strolled the grounds a little when we arrived, they have a beautiful covered patio next to the tasting room and the residence.  The tasting room was busy and lively and just the right size.  It had a really warm feeling that is the essence of their motto “Visit us once and you are family forever.”  We did a basic tasting and look forward to going back for a reserve tasting.  All the wines here were beautiful and well balanced.  We tasted their beautiful 2011 Semillon and Sauvignon Blanc as well as the 2010 Cabernet Sauvignon and the 2010 Petite Verdot.

On the wall behind the tasting bar was a shelf filled with wines in gorgeous bottles.  These are the higher end reserve wines.  The Library reserve Zinfandel and the reserve Syrah both of which go for $150 per bottle. These were made it very small lots.  We also tasted some of their chimichurry sauce and left with a jar.

After our tasting I asked for a map for their self guided walking tour.  This lovely stroll around the property was relaxing and informative and is well worth the time.  The tour takes you out of the tasting room past the residence and patio where some of Marcelo’s motorcycles are on display.  You wind around and see the Doffo windmill some of the beautiful terracing they have done then stroll through the Malbec to the front of the property the original stairs to the old school house and the olive tree on the corner of the property before heading back up to the tasting room.  They also make olive oil and infused chocolates.

This beautiful tiny winery has terrific wines and a great atmosphere.  Next time you find yourself in Temecula be sure to stop by!