Recently I indulged myself with a day of movies. I love going to movies by myself. You can immerse yourself in a film, in it’s moods, colors and tones. I always stay until the end to read all the credits. By then you can escape quietly, no other voices to pull you out of your contemplation/meditation. There is no one there waiting to talk about the film, no one to disagree with your interpretations. You are free to stay immersed in your reverie, musing on the mood the film has wrapped you up in.

This was a day for that. I went to see The Phantom Thread. It was lyrical and ordered, filled with manipulation and surrender. (The sound design, by the way, was stunning. You will hear about the annoying toast, but it goes far beyond that. They movie is filled with silences with the sounds of steps or breathes, of closing doors or fabric moving.)

I left and still happily ensconced in my reverie headed to look for a bottle of wine for my evening. I am exploring the Rhône and settled on a bottle from Lirac. The shelf talker spoke of violets and white pepper and this seemed appropriate today. (I will stay away from mushrooms for a bit. spoilers)

I chose a Domaine Coudoulis 2013. This wine is a blend of grenache and syrah. 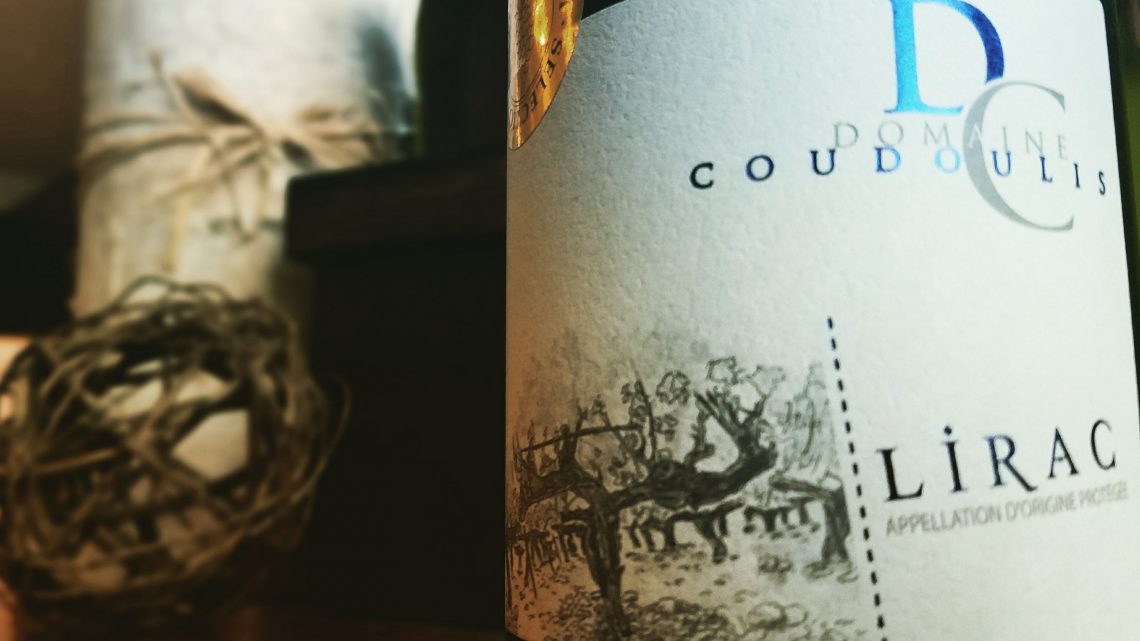 So as always, I like to know a bit about where the wine I am drinking came from, so…we will dive in to a few details on Lirac and then Domaine Coudoulis.

Lirac is in the southern Rhône and sits west of the Rhône River across from the famous Chateauneuf du Pape AOC and just north of Tavel where the famous rosés are found. It officially became and appellation in 1947, but wine grapes have been grown here since the middle ages. 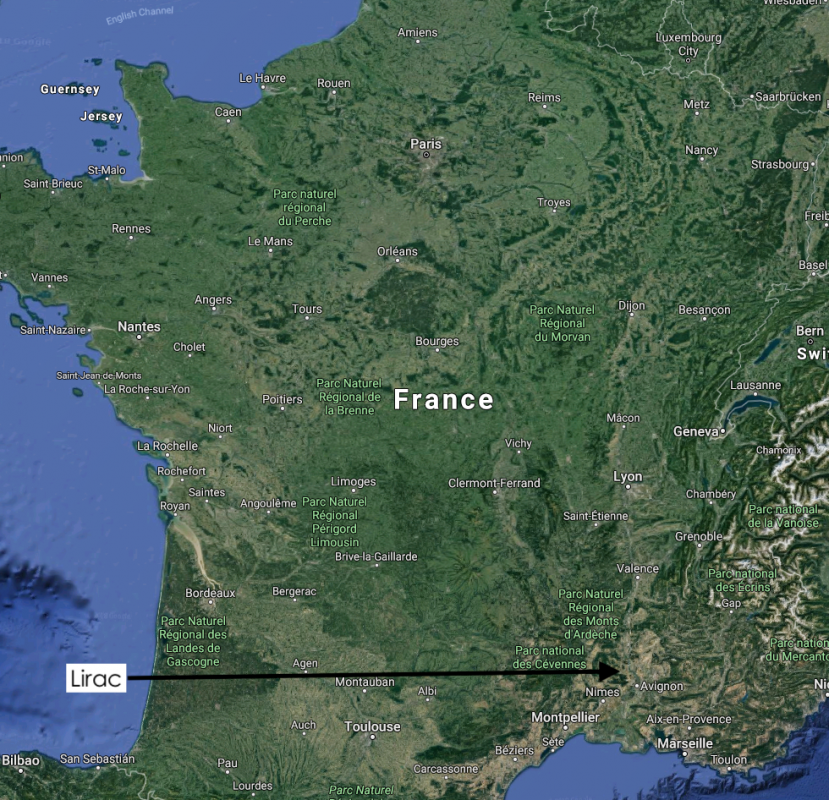 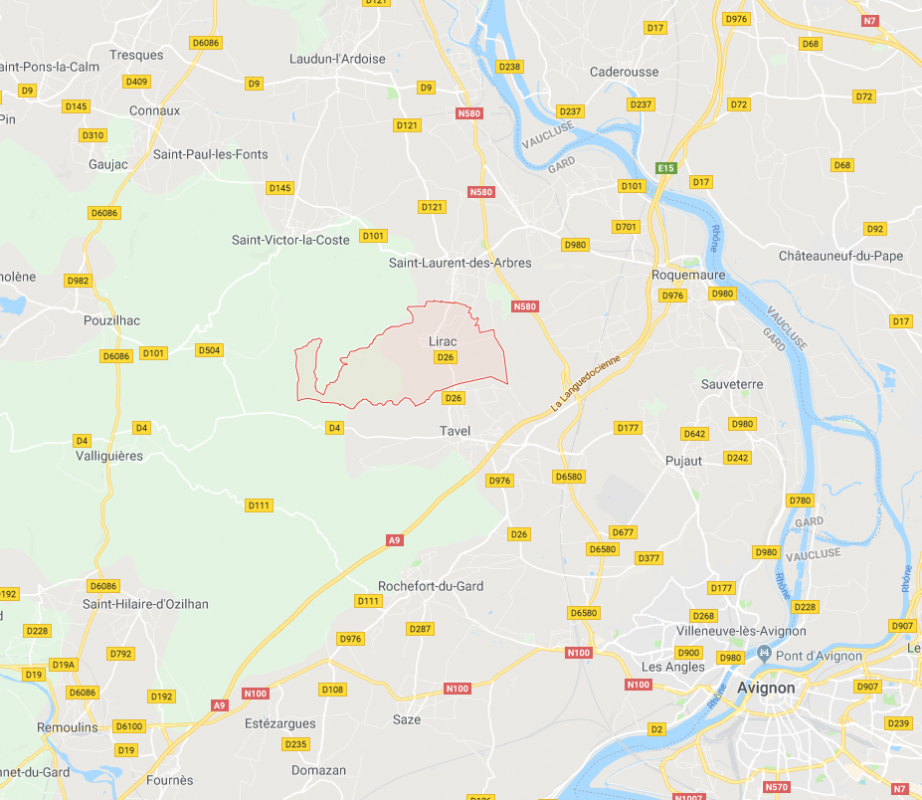 The Lirac Region of the Rhône Valley, North of Avignon and across the Rhône River from Châteauneuf-du-Pape. Mapdata ©2018 Google 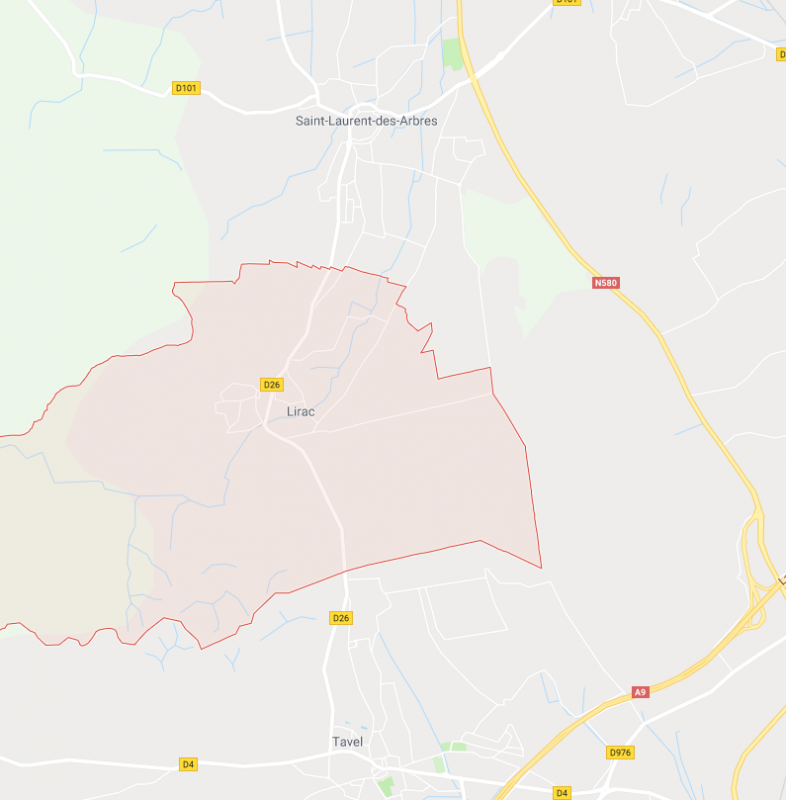 You will find crus here in red, white and rosé. Primarily they focus on the reds, with 10% of the wines being white wines and just 3% rose. They focus on the white grapes Grenache blanc, bourboulenc, roussanne and clairette and use picpoul, marsanne or viognier for in small amounts for blending.

The variety of soils, clay plateaus with those galets roulés or pebbles for the reds, sandy soils where they grow the red for rosés and then the scrubland where the whites grow, give each variety a distinctiveness.

The red wines here are full-bodied, the white wines are heavier whites with floral notes. Many of the rosés of the area are in the deeper darker style of Tavel, but are significantly more affordable.

While Lirac has only been an AOC since 1947, it is said that Lirac is the birthplace of the Côte du Rhône. In the 16th century the wines of Lirac were known around the world. They were very popular so to protect them from misuse of the name, the wines were authenticated by labeling the barrels CDR (Côte du Rhône). This was the origin of Côtes du Rhône wines.

Read more about this amazing region in a beautiful article by Jill Barth that she wrote for PalatePress.  It gives a vivid and intimate view of this area.

The soils here are limestone topped with a dusting of red clay and pebbles. They grow grenache, syrah, cinsault, carignan and mourvèdre as is typical for the region.   Harvest yields are kept low to keep the best quality and the grapes are harvested by hand. The grapes are destemmed before fermentation.

Bernard Callet bought Domaine Coudoulis in 1996. The Domaine is 28 hectares (just under 70 acres). It sits on a terrace where you look out over head trained vines, the rows between filled with the galets roulés, and down onto the village of Saint-Laurent-Des-Arbres and it’s medieval castle. There is a sense the history of the place, and you remember that wines have been grown here since the middle ages.

When Bernard Callet bought this place he wanted to blend the tradition with the modern. He spent 10 years on-site learning from the crew. He and Patrick Hilaire, his winemaker, then take the tradition and add a little innovation. So the grapes are sorted by hand, and then go into a modern cellar with a cooling system built into the walls. But within the added technology there is a simplicity. A respect for the vines and the soil.

I sat down on the couch with this lovely bottle and continued my movie reverie, turning this time to “Theatre of Life” a beautiful documentary on the story of the Refettorio Ambrosiano, invisioned by Massimo Bottura. Massimo was overwhelmed by the amount of food waste at the Milan Expo and worked with other famous chefs to open a soup kitchen which would serve gourmet meals made from this food waste to the hungry in Milan. His restaurant Osteria Francescana is in Modena and was rated the 2 two restaurant in the world by Restaurant Magazine in 2015. The story of Refettorio Ambrosiano is not just that of the chefs and the food that they create, it is about the sense of community and respect that they bring to the hungry. Much of the food waste is bread and the through line becomes “bread is gold”. Such a simple thing, bread. Breaking bread together can span the gaps between us.  The documentary begins with a homeless woman, Stefania Bassania reciting a poem she wrote, it continues, sharing the stories of the people who came to the Refettorio Ambrosiano and their stories of how they came to Milan and how they became homeless.  It also documents their stories as their lives continue.  It’s about people coming together at table, and finding that we are not so different from each other.  Using our empathy to see their story from their perspective.  So I was in this very open place when I reached for the bottle of of 2013 Domaine Coudoulis Lirac.

Then the 2013 Domaine Coudoulis Lirac

As I opened the wine, blackberries hit my nose immediately. As I dipped my nose into the glass there were dusty notes of cocoa powder, I swished it in my mouth and tasted dark chocolate. (It went brilliantly with the chocolate pudding cake I had for dessert). As it opened up there were notes of dried thyme, then a little barnyard funk and wet straw. Another dip with my nose and I smelled anise/black licorice. At this point the movie had me enthralled, there were tears…does that mess up your nose for tasting? Doesn’t matter, my heart was full and I went back to the wine and found more warm dark berries, those blackberries from the beginning, warming, changing and coming full circle. There were violets and white pepper and then some deeper warmer spices like curry.

The tannins on this wine coated my mouth, and then smoothed, like the feeling when you brush your hand against the grain on velvet feeling the prickliness, then you turn your hand and feel the luxurious softness as you smooth the fabric. 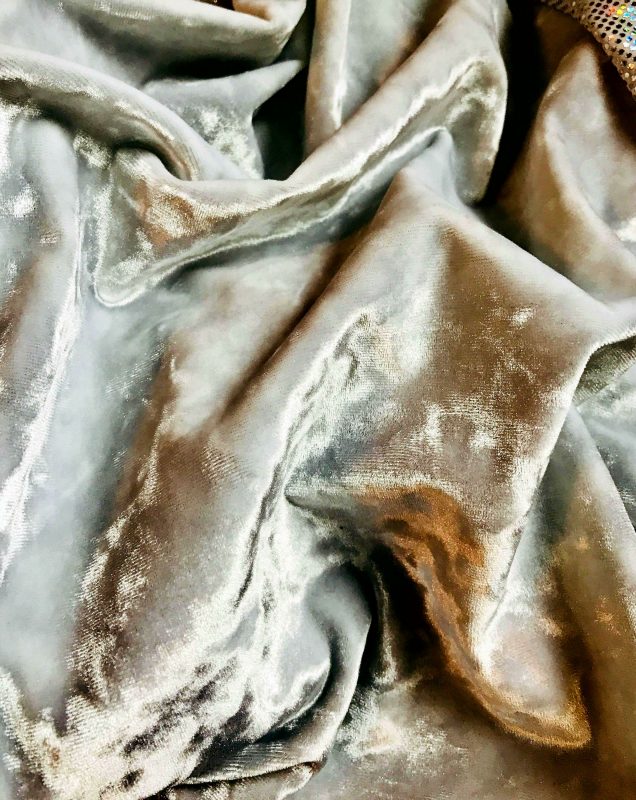 Velvet and other fabrics can be so soft when you touch with the grain, but brush it back and you get that prickliness, that roughness. (photo credit Act2Art by RuBen)

This wine is not a high end wine, and it comes from the other side of the tracks (the other side of the Rhône from the more well-known Châteauneuf-du-Pape). But the depth and unfussy complexity was perfect. This is a rustic heartfelt wine and it was the perfect pairing with my day of movies. The 2013 Domaine Coudoulis Lirac can be had for $17 or less and is pretty widely available.

All in all it was a day of exceptional feels.  The movies opened me up to listening more deeply and being open to other perspectives, which in turn I believe opened my senses to be able to take in the depth of the wine and the changes as it opened up.  It is typical to pair wine with food, but wine is so much more, and pairing it with, movies, art and music can open your mind to new ways to appreciate it.

We are exploring the wines of Maury with the Frenc