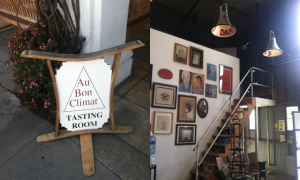 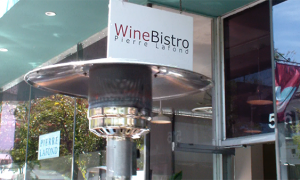 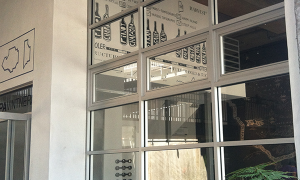 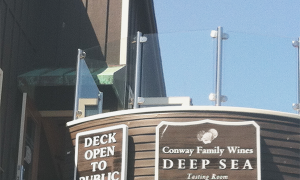 ABC and a stroll up State Street

So…we had lunch out on Stearns Wharf and enjoy the view and then do a tasting at the ever so kitschy Municipal Winemakers and now we decide to head to Au Bon Climat or ABC as they call it here.

Jim Clendenen is well known in the wine world.  He graduated from UC Santa Barbara in Pre-Law in 1976 and the world should be very grateful that he found another path.  A “junior year abroad” trip to France had him falling in love with wine.   He was the Assistant Winemaker at Zaca Mesa for 3 seasons beginning in 1978.  (We will get back to Zaca Mesa later!)  Mr. Clendenen has been at the forefront of putting Santa Barbara County on the map as a wine region.  His restrained manner of making wines has given him plenty of ups and downs with reviews as tastes changed, but he has persisted and continues to make beautiful balanced wines that age well.  He looks like a bit of a hippy with his shoulder length hair, beard and typically a Hawaiian style shirt.  He founded ABC in 1982. 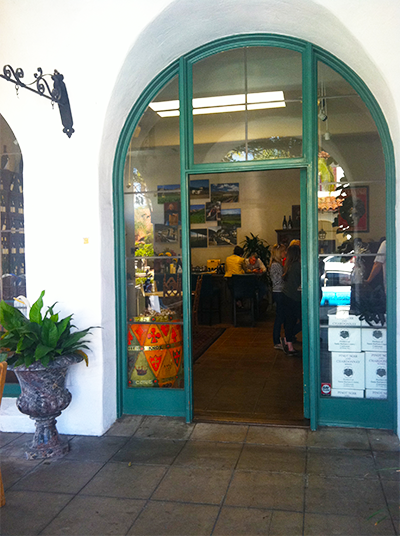 To get there from “The Funk Zone” I figured we would walk State Street.  I was a little nervous about having to get to the other side of the freeway, but there is a gorgeous underpass with bougainvillea to get you there past the Reagan Ranch Center.  State Street is a lovely walk with great shops, restaurants, Café’s with sidewalk seating and beautiful older buildings.  It was a great walk but we were not prepared for it to be as long as it was!  We found the 2nd Starbucks (the one on your right, not your left as the pourer at Municipal directed) and turned left on De la Guerra St.  A right on Anacapa put us in front of Au Bon Climate and Margerum.  With only time for one tasting room, we went into Au Bon Climat and stepped up to the tasting bar.  The tasting room is lovely with two tasting bars and a table with chairs, which when we walked it was strewn with AVA and vineyard maps (got to love that!). We tasted through the regular menu that is far more than Au Bon Climat wines.  On this day it included 3 other labels: ICI/ La-Bas, Clendenen Family Vineyards and Il Podere Dell’ Olivos. 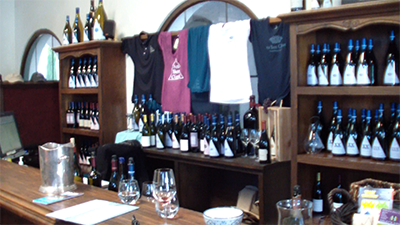 All of the wines were wonderful.  Each balanced and with it’s own character.  Our pourer was happy to give us details on the wines as we tasted. He also gave us his card for a 2 for 1 tasting at Qupe where we were dashing off to next.  Jim Clendenen and Qupe’s Bob Lindquist are old friends both coming out of Zaca Mesa (we had a great Zaca Mesa Chardonnay when we ate at The Poppy Den) and both celebrating 30 years in winemaking this year.  Realizing we were running short on time, we made the trek back in cut time!  I look forward to coming back to Santa Barbara and spending a few days so we have time to stroll from tasting room to tasting room enjoying the sites.

On our recent trip to Santa Barbara we picked up a bottle of Carhartt’s 2012 Sauvignon Blanc.  On the tasting menu it suggested a pairing of scallops or  mango salsa, sooo last  Thursday night we combined both. 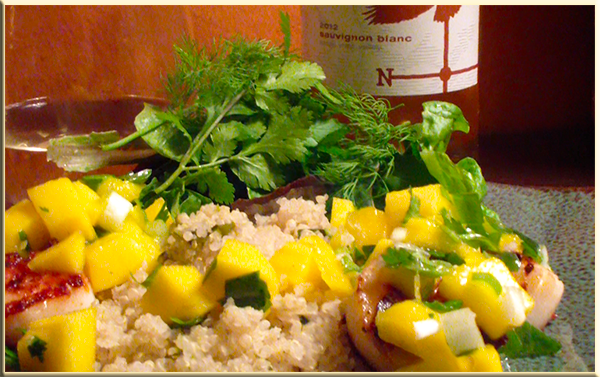 The 2012 Sauvignon Blanc is from the Santa Ynez Valley with 47% of the fruit coming from the Carhartt vineyard, 17% from the Faith Vineyard, 18% from La Pressa and 18% from Curtis. (This is the geeky stuff I love that Carhartt kindly puts on the back of their labels!  Ready to geek out some

more?) The wine is 100% Sauvignon Blanc, clone 1 on 101-14 rootstock grown on a vertical trellis system.  This was whole cluster pressed and fermented in 50% stainless steel and 50% neutral oak for 6 months.  Only 750 cases were produced.

The mango salsa I created was a simple recipe with mango, green onions, lime juice, cilantro and olive oil.  My mango was not fully ripe, so it had a little tartness to it.  Michael cooked the scallops in butter and olive oil with just salt and pepper.  We did a fresh herb salad from the garden with a sesame dressing, quinoa with herbs and some avocado/cucumber rolls from Whole Foods.

Michael remembered that we had 2 other whites open (we have a vacuum sealer and they had only been opened the day before!  Don’t worry!).  One was a Field Blend from Stuart Cellars.  This wine was 45% Chardonnay, 35% Sauvignon Blanc, 15% Viognier and 5% Muscat.  The Muscat definitely adds a sweetness to this wine.  Stuart Cellars was a winery in Temecula California, they were bought out by a company an are now named Bel Vino.  We had a bottle of Bel Vino 2012 Viognier also open, so…we thought we would give them all a shot! The Viognier I had really enjoyed the day before and the Field Blend is Michael’s go to. 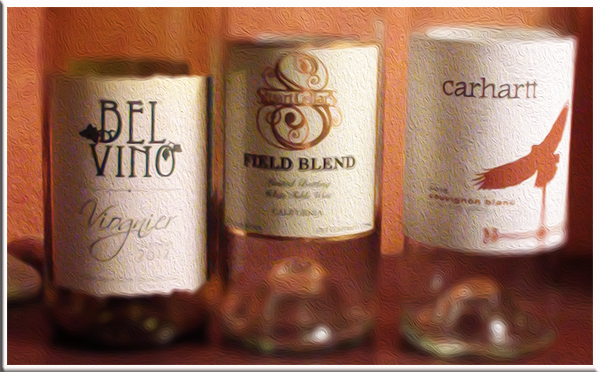 This could become a Thursday event!  Look forward to some Pizza pairings and then possibly a take off on “The Taste” with spoon full tastings to pair.  This promises to make Thursdays my favorite night of the week!

When we were traveling through wine country last year we made a brief afternoon stop in Los Olivos.  It was almost the end of the day and  we had stopped at 2 other tasting rooms and headed down to Saarloos and Sons only to find them closed.  Sadly we headed across the street and the gods were more than kind as we slid into the tiny little tasting room a Carhartt.  I’ve waxed poetic about them before so feel free to check out that blog post if you want more details on the tasting room.  For here, suffice to say we were in love and charmed and joined the wine club.  So…as folks who rarely have the weekend off, when we had a vacation the first thing we did was to check our wineclubs and see if any had special events.  Voila!  The Carhartt Winemakers Dinner fit perfectly!  The Dinner is held at the winery on Rancho Santa Ynez just south of Los Olivos.  Limited to 120 guests the event feels like a family affair with Brooke, Mike and Chase out greeting guests and pouring wine.  We began thinking it was going to be cold and in fact many people went to get coats.  I however had not thought to pack one…it didn’t matter with the food wine and conversation I never got cold. A band played jazz with a keyboard/trumpet player and a dog.  (yes keyboard with one hand, trumpet with the other). Lights were strung over the lawn and candles set on each table. A roving magician wondered entertaining guests.  Richard’s quick wit and ability to deal with hecklers was impressive.  He also helped a table of people who didn’t know each other to bond.  Dinner was great, the wine fantastic and we made 7 new friends!  The raffle ended the night and our table seemed always just a number away from a win.  Finally Michael’s number came up!  We won a bottle of 2009 Fourplay.  While it was a prize worth saving, the only way to finish this evening was to pop the bottle and share with all of our new friends.  It took some work!  They tried to talk us out of opening it and then when opened the pourer tried to tell us “Oh no, I think it’s corked!  I’ll take it home for you!” HA  we poured a glass for everyone at the table and enjoyed a charming moment of community with these other wine lovers.  A perfect end to the evening.

*This wine was received as a sample. All opinions