The Valley Grove Vineyard and the future...

Nesting and pairing – polenta with...

So my #pantrypairing for tonight! We had some tor

Tonight we will open this Sauvignon Blanc from Cad

View from the roof, smushed with Michael in the Pa

This afternoon we are doing the #flatteningthecurv

Destroyer of flowers! He was ferocious with them

Yesterday there was no wine. Well...okay, there w 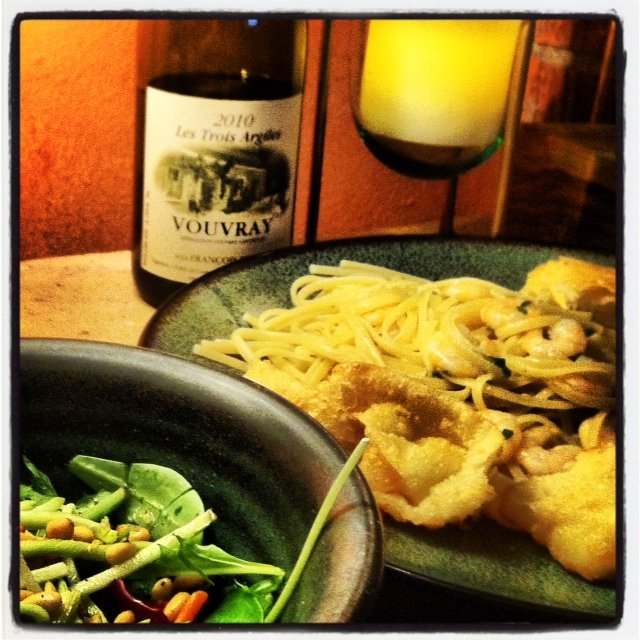 I had the best Secret Santa this year!  I got Yoga Socks, a beautiful plant, an exceptional healthy dinner and…two bottles of wine.  One of those bottles I popped on my own while Michael was working and enjoyed with a solo dinner, snuggled in a blanket on the couch.  The other, I saved to enjoy with Michael.  It was a 2010 Les Trois Argiles Vouvray.

Vouvray is a region in the Loire Valley in France and is east of the city of Tours.  Vouvray  is typically 100% Chenin Blanc, but the grape Arbois is also permitted, though rarely seen.  Vouvray itself is versatile in that it can be made in multiple styles from dry to sweet.  Sec is dry with less than .4% residual sugar, from there you move to Demi-Sec, Moelleux and finally Doux which is the sweetest with 4.5% residual sugar.  It can also be made into a sparkling wine.  Traditionally  Vouvray is made with neutral barrels or stainless steel and does not go into malolactic fermentation.  This wine is bottled early and ages in the bottle.  Many fine Vouvray’s especially those that are Moelleux or Doux can age for decades.  The Sec or Demi-Sec have potential to age for 15-20 years.

This region is actually very cool and harvests are often late here, sometimes the latest in all of France falling into November. If a year is very cool more sparkling wine will be made as there is higher acid in the grapes, whereas in warmer years they will lean toward making more Vouvray.  The finest Vouvray’s are the product of Noble Rot much as Sautermes are.

Besides the cool temperatures, this area is also known for vineyards on cliff tops. The limestone cliffs below were often used for the harvesting of tuffeau rocks used to build Chateaux.  These caves that were created were then turned into cellars.  The entire area is situated on a plateau and most vineyards  face the river.

This is a food friendly wine, like Riesling and goes well with chicken, seafood, pork, soft cheeses, fruit and almonds.  The reviews of the 2010 Le Trois Argiles specifically recommended shrimp, crab or lobster…so…

I threw together a quick Scampi.  When I say quick, I mean take all the shortcuts because Michael just got home and is really hungry!  He tossed some langoustine ragoons in the oven along with the Par baked Ciabatta I had picked up.  I whipped up a salad with herb greens and pine nuts, threw on a pot to boil some linguine and got some butter into a pan on the stove.  We cheated and picked up frozen precooked shrimp, which we defrosted under cold running water and then tossed in olive oil with garlic and salt.  This was a quick cook when the butter was done and then we added a little of the Vouvray as well as fresh parsley.  This was a 15 minute meal.  As a result, the shrimp missed out on picking up lots of the flavors, but all in all it was a good match.  Next time it will be better.

The Vouvray was suggested to drink at 47 degrees, but we found that we enjoyed it more and more as it warmed over the course of the evening.  For me the nose was the spray as you cut into a fresh green apple.  It had beautiful acid that was not overpowering and made you want to go back for more and more.

It is my understanding that it goes beautifully with Turkey or Ham, sooo if your Christmas dinner has either on the menu, I suggest picking up a bottle.  Many very good Vouvray’s can be found between $15 and $20, so they are very affordable. 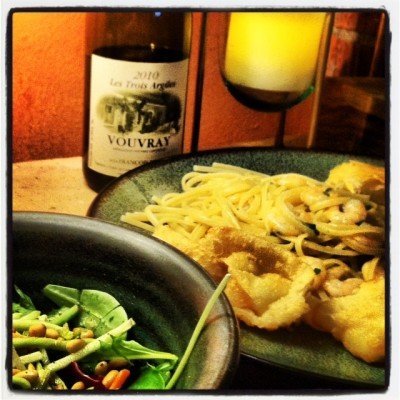