We left ABC and hurried back to the car (it was a bit of a hike!) and headed on to Los Olivos to try to get to Qupe before the tasting room closed.  We had driven from Santa Barbara to Los Olivos before taking the 101, but this time Google routed me on 154 past Lake Cachuma.  It was a beautiful drive and saved us time!

We pulled into Los Olivos and Parked at the end of the street.  Saarloos & Sons was closed for the day, but were obviously busy with an event on the back patio!  We passed them and headed to Qupe apologizing for arriving so late!  The tasting room here is cozy and welcoming. There are 3 logos on the windows: Qupe is Bob Lindquist’s label; Verdad belongs to his wife and Ethan to his son. 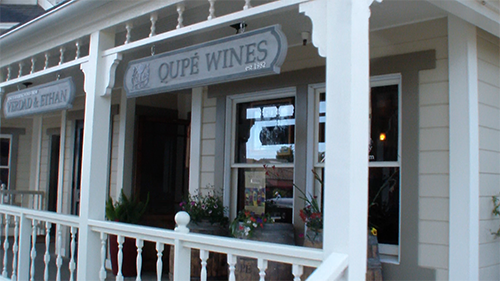 Qupe (pronounced Kyoo-pay) is the Chumash Indian word for the California poppy.  The Chumash Indians are native to the Central coast and Bob wanted to honor these people.  Bob Lindquist moved to Southern California with his family in 1964 when he was just 11.  He got into the wine industry in the mid 70’s starting with a harvest at Fortino Winery.  From there he went to San Martin Winery to work in the tasting room and worked his way up to assistant manager.  He ran the San Martin tasting room in Ventura County and started frequenting the wineries in the Santa Ynez Valley.   Here he felt his calling.  The story goes, that he worked in a wine shop in Los Olivos for the son of the co-owner of Zaca Mesa.  From there he met Jim Clendenen who was the assistant winemaker at Zaca Mesa at the time.  Here’s where rock-n-roll steps in…Bob got tickets to see the Kinks and got fired from the wine shop for attending the show (I’m assuming he skipped work for it). Jim Clendenen hooked Bob up with a job as Zaca Mesa’s first tour guide.  Without many tourists to guide, Bob spent most of his time in the cellar learning from Jim how to make wine.  In 1983 he left Zaca Mesa to work full time on his own label Qupe.  Bob & Jim share a winemaking facility to this day out at Bien Nacido.  Verdad is the label Bob partnered with his wife, Louisa Sawyer Lindquist to specialize in Spanish varieties. Verdad makes a Grenache based Rose, as well as Albarino and Tempranillo.  Total production is about 2000 cases.  Ethan is the small label of one of his older sons (Ethan!).  This label is small and produces Grenache, Sangiovese, Grenache Blanc and Syrah. 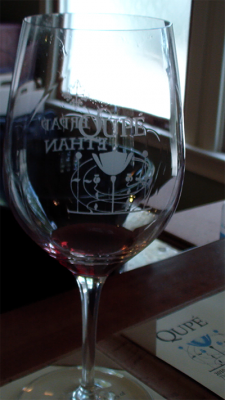 So on to the tasting!

This tiny little tasting room has some gems to taste and…if I get a hankerin’ for a Qupe wine…he has a high distribution Chardonnay that I can get right down the street at Fresh & Easy!  To bad they don’t carry that amazing Verdad Grenache Rose!

October is #MerlotMe month! We are celebrating wi

#sample This beautiful sample we received from Qui

This weekend we travel virtually to Navarra Spain