Lorimar Winery, Inspired by Music and Art from Crushed Grape Chronicles on Vimeo.

We stopped back to check out the new tasting room at Lorimar Winery  in Temecula Wine Country.  Check it out.

If you head out onto the De Portola wine trail in Temecula California you won’t be able to miss Leoness Cellars. 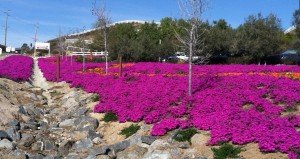 The building is statuesque in the rolling hills.  The name was originally to be after the two owners wives, but…doubting the success of the endeavor the wives begged out of having it named after them.  They settled on Leoness after the Lady Guinevere of Lyoness. The word Leoness means “village of dreams”.  Founded in 2003 by Mike Rennie and Gary Winder the founders both came from families in the agriculture business.  Many of the vineyards that you see around the valley sport the “Stage Ranch” sign or the Temecula Valley Winery Managementsign.  Temecula Valley Winery Management.  Together Leoness and Stage Ranch began the TVWM in June of 2007.  This facility near Old Town allows smaller wineries a place to produce and store wines as well as having a winemaking lab.  In this way Mike and Gary continue to mentor new wineries.

The tasting room at Leoness is immense which is good.  During the weekends it is said that patrons line the bar 2 to 3 deep waiting in line for tastings.  There is an outdoor patio with an indoor/outdoor fireplace, a lovely and large seating area inside, vaulted ceilings with exposed beams.  The walls are painted in a trompe l’oeil style.  We did a tasting and tour which afforded us the luxury of beginning our tasting lounging in the seating area.  After enjoying tastings of two of their white wines here our tour took us out on the patio to the restaurant area.  Their restaurant is open on the weekends.  We walked to the beautiful wedding area and then over the trail through the vineyard to the barrel room down the hill. If you are not doing the tour I encourage you to come out and follow the signs for the self guided vineyard tour!  They have over 400 acres of vineyards here in the valley, 20 here at the winery.

Tim Cramer is their winemaker.  They use a combination of French oak and American Oak Barrels.  The American oak is from Minnesota, which makes me think it is a tighter oak as it is grown in a cooler climate. 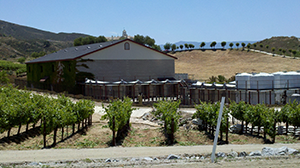 The barrel room is lovely and large and cool.  They use this for special events and due to the high weekend traffic they also open it as a tasting room on weekends for their club members so that they do not have to wait in line up the hill.   The grounds are beautiful and filled with flowers.  It’s a perfect place on the weekends for an al fresco lunch and tasting!

Winery’s off the Beatin Track, Part 2

Another Wine Maker not to miss while visiting Paso Robles. On our last day this trip in Paso Robles we stopped at:

Carol at Vina Robles suggested we stop here.  She said they have great wines and not enough people get by their tasting room.  The tasting room, while small was Beautiful!  Terry Hoage played football for GA Bulldogs and then the Eagles, as a safety.  His College GPA was stellar and he is a brilliant man.  He and his wife settled her to raise their family.  They have chickens in the vineyard eating the bugs and a lake.  The wines here are lite bodied, but full of flavor, nuance, texture and depth.  Evan in the tasting room was warm and knowledgable and filled us with great information on the wines and vineyard!  A guy in the tasting room (lawyer) suggested Evernote as a great application for taking wine notes. Michael will check it out.  It allows you to take label photos.

Evan was the pourer, and very enthusiastic and knowledgeable about their wines. This was a passion not just a job, was encouraging, because we had been at a couple of previous stops where the winery just hired a body, who had no real knowledge except how to pour the wine. We tried 2008 Tranche Cuvee $48, 2008 The Pick, Granche Cuvee  $48,  2007 The 46, Grenache Syrah based on the 46 defense of Buddy Ryan, 2008 5 Blocks, Syrah Cuvee $48,  all Very good complex wines that had body, structure, taste, and subtle nuances.  A great find we never would have tried or put on our list without a recommendation. 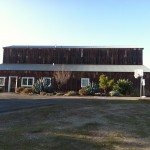 Have you found any Hidden Treasures?  Let us Know? 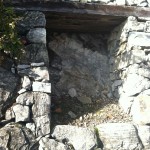