The call of Natural Wine

Natural Wines with Matthieu at the Farmers Market

The call of Natural Wine

I ran by the farmers market to drop something to a friend, say hello and then grab a quick and delicious lunch. I love the farmers markets. Finding the season fresh produce, meeting the farmers and hearing their stories. You walk through the market and smell the season, peaches or citrus, greens or spices…today I had planned to be in and out quickly, but then…someone said wine, natural wine and Mathieu pulled out 6 bottles and asked if I had a minute to hear about them. They will be starting a wine club soon and bringing in natural wine. It doesn’t hurt that Mathieu is handsome with a beautiful French accent (he also makes extraordinary preserves). And today he had a selection of Natural Wines, as well as a beer and a hard pear cider. 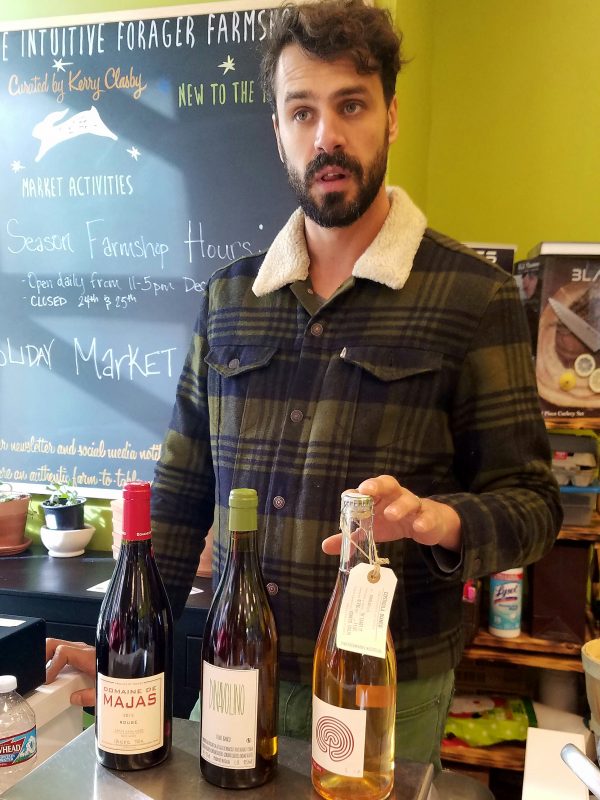 Mathieu and the Natural Wines at the Intuitive Forager Farm Shop

Mathieu gave us a quick overview on the wines which got my brain going, so of course I researched further, so you will get some additional insights I dug up on the stories behind the wines, winemakers and wineries. 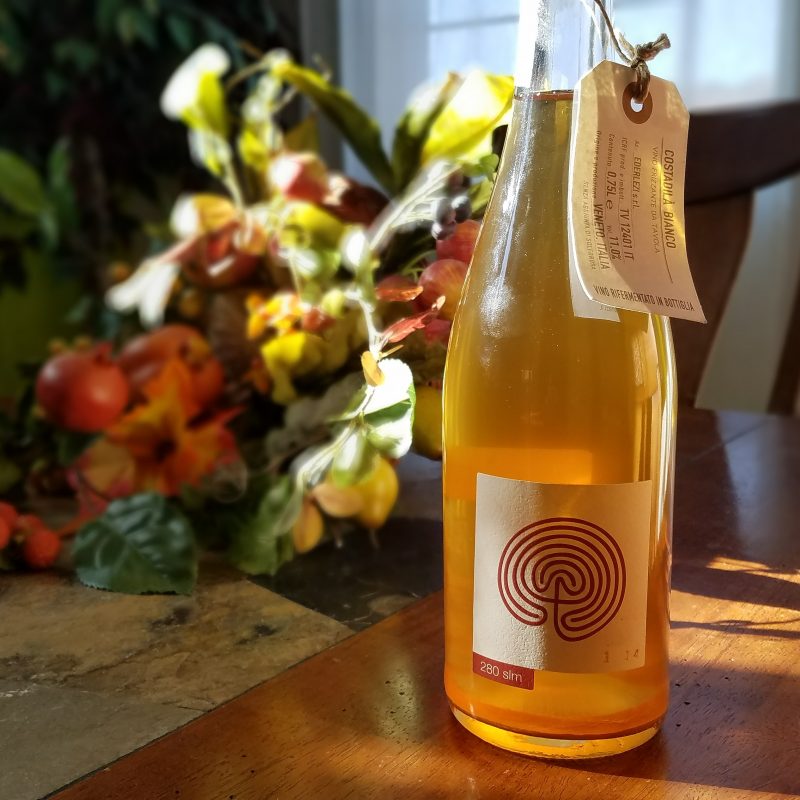 Costadila means “the hillside over there”.  This winery was founded in 2006 by a group of partners.  Their mission statement is “Articoltura” – Art, Agriculture and Culture.  Their goal was to re-invigorate the agricultural traditions of Tarzo a municipality in the Province of Treviso in the region of Veneto.  Everything here is farmed organically and they grow more than grapes.  The emphasis here is on polyculture with fruits, grains, vines, vegetables and livestock.

This particular natural wine is a Natural Prosecco.  They do not add sulphur and the wine is shipped un-disgorged as you see in the photo (note all the sediment, that’s the dead yeast, in the bottom). This wine is fermented with native yeast until completely dry.  They then bottle it with passito grapes that are dried for a secondary fermentation.

The note at the bottom of the label (280 sml) indicates the elevation in meters where these vines grew. 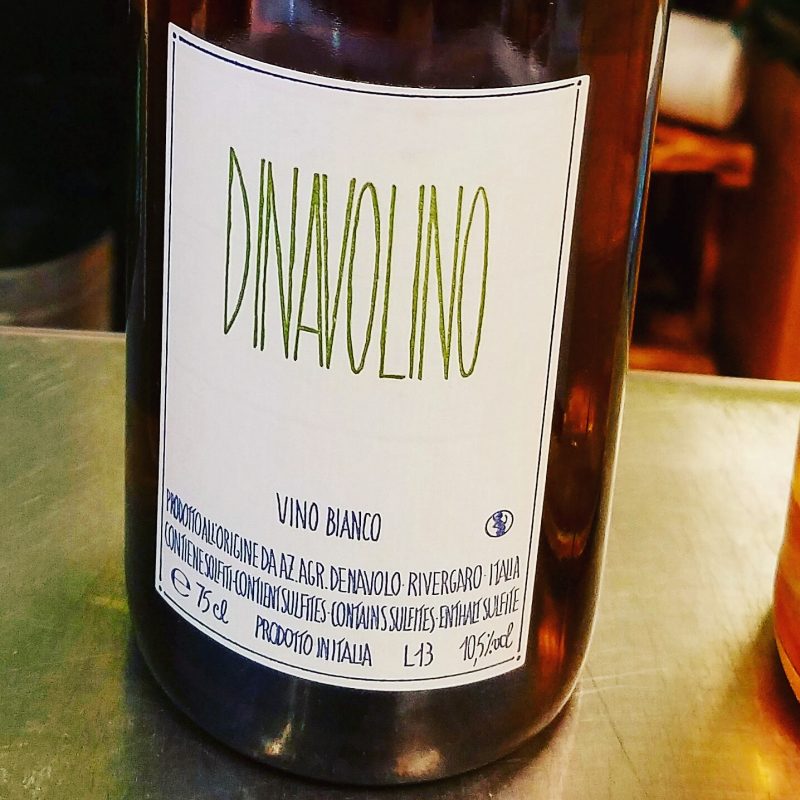 This is an Orange wine from Denavolo.  Mathieu tells us that it is made in amphoras in the ground and undergoes a 21 day maceration period, mixed with a stick.  The visions that I have of that seem prehistoric, so I did some more research.

For a little primer on Orange Wines, here is Madeline Puckette of Wine Folly!

I have tasted Orange wine at Le Cuvier in Paso Robles where the legendary John Munch is the “Co-owner, Wine Herd/Winemaker & Elliptical Pontificator” (please click through and read his bio,it will make you chuckle).  Tasting these wines for the first time you might find the taste and nose decidedly unexpected and those winemakers who choose to make them, well…they are decidedly unexpected also.

So indeed, Orange wines are made with white grapes in amphoras or Kvevri, typically placed in the ground with just the lid above.  The grapes get lots of lovely skin contact, which gives them that orange color.

Giulio Armani’s orange wines come from grapes grown high up in the hills of Emilia-Romagna near Piacenza These vineyards grow very small berries so the ratio of skin to must is high.  This wine is a blend of Marsanne, Malvasia (di Candia Aromatica) & Otrugo (or Piancentino).

He produces several other wines (he grew up making wine at La Stoppa from age 12!), and is constantly experimenting. 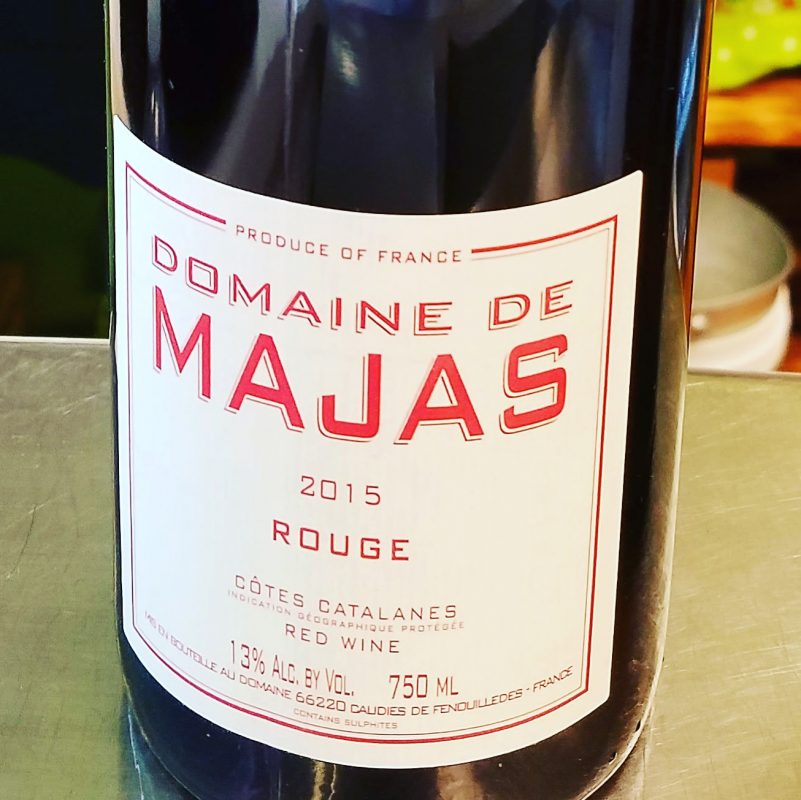 Tom Lubbe was born in New Zealand and grew up in South Africa.  He worked at the only South African Estate that used indigenous yeasts and encouraged low yields (ie low yields better grapes).  He did an internship at Domaine Gauby, and ended up marrying the owners daughter.  He and Gerard Gauby then started Domaine Matassa making wines from the indigenous grapes in Cotes de Catalans.  Then he met Alain Carrere owner of Domaine Majas, together they made the vineyard biodynamic, went to all indigenous yeast, no manipulation and very little sulphur.

This wine is Carignan with perhaps a bit of Grenache.  They are picked early to keep the acidity higher.

I want to be sterotyped 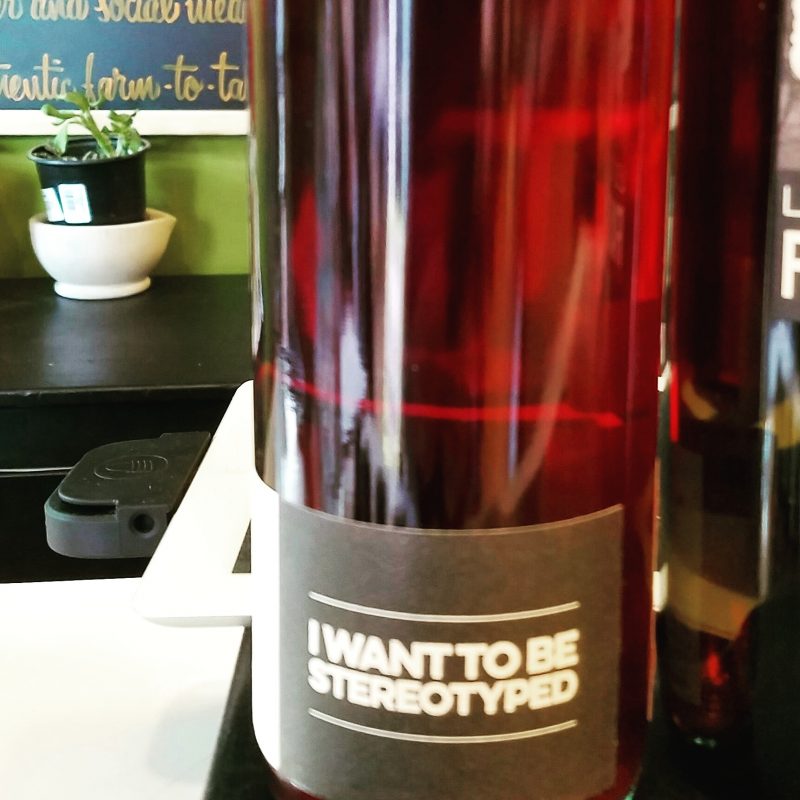 So this is a Carbonic Cabernet Franc made in Long Island.  Yep, Long Island New York.  This winery has quite the story.

But first..Carbonic wine…Carbonic masceration is a technique used for Beaujolais.  Simply put it is fermenting whole grapes in carbon dioxide before crushing them.  If you want to be more sciency…well Ask Wine.com had the most satisfying answer that I came across. Now onto the winery story.

Southold Farm + Cellar was a family affair.  Regan & Carey met working in Manhattan and returned to Carey’s hometown to start the adventure of telling the story of this place through wine.  Southold Farm is in Southold, New York on the Northfork of Long Island.

With some whimsical and beautiful labels they created 2013 Cast your fate to the wind (Whole Cluster Cab Franc), 2013 Devil’s Advocate (Old Vine Chardonnay), 2015 Trust the Pain Langrein, 2015 Quiet Explosions (Teroldego) and sparkling wines Chasing Moonlight Sparkling (Langrein), 2015 You Pretty Things (Syrah/Goldmuskateller Pet-Nat) and then of course I don’t want to be stereotyped (Carbonic Cabernet Franc).  The names and labels create a lightness and depth of feeling at the same time.

This story is on hold right now.  The town of Southold denied their request for a single variance on their property.  They made the decision that they could not sustainably run their small business there.  They took a step back and looked at where to go to from there.  They are moving their family and the Winery to the Texas Hill Country.  So cherish those bottles if you have them and we will keep our ears to the ground and track their progress. 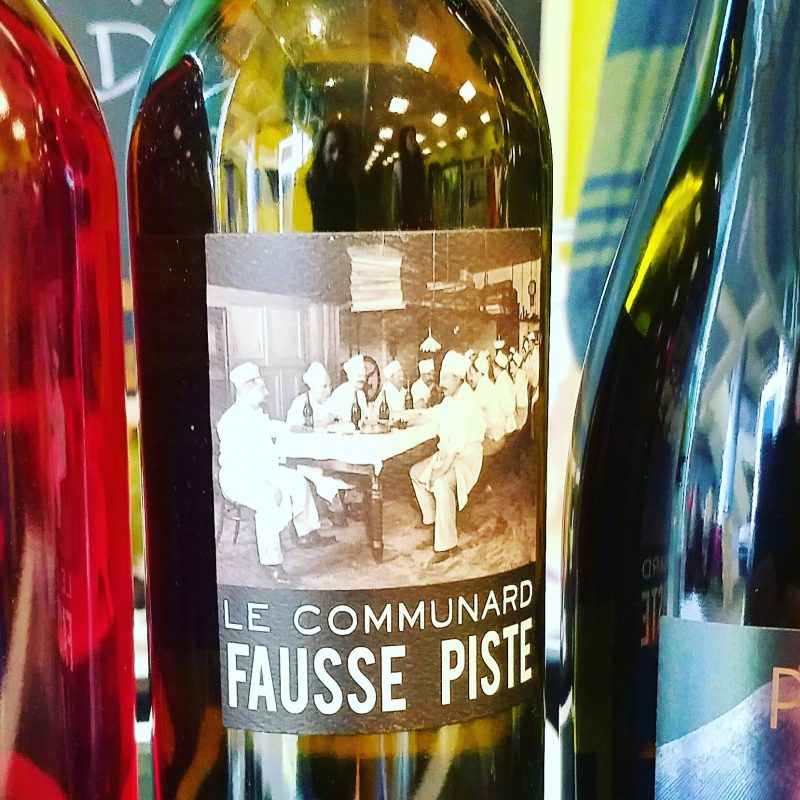 Jesse Skiles grew up in the Pacific Northwest.  A Chef by trade he became a winemaker.  He graduated from CIA and worked at Owen Roe Winery as well as being the Chef at Savage.  A blend of Gerwurtztraminer, Gruner Veltliner & Riesling from a cooler climate, this is a dry white wine.   It is basket pressed with native fermentation and extended aging on the lees.  You can find the tasting room at 537 SE Ash St. in Portland. 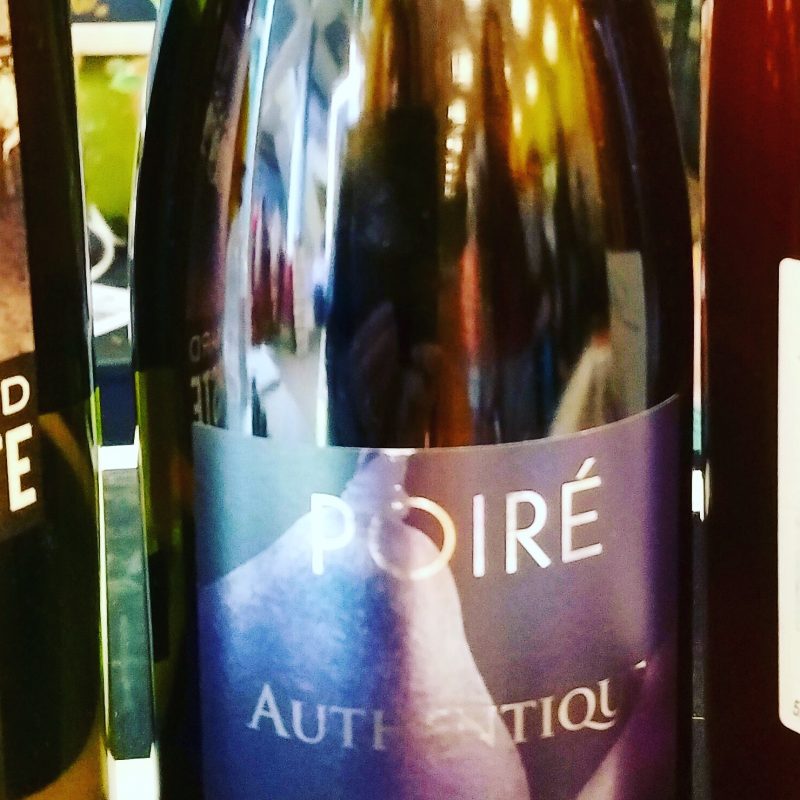 Before 1992, Eric Bordelet was the Sommelier at Arpege, Alain Passard’s Restaurant in Paris.  In 1992 that changed when he took over the running of his family’s property in Normandy.  The location is in the south of Normandy on sedimentary rock that dates back to the Precambrian era.  Two thirds of the orchards are 40-50 years old, the remainder were planted in 1992.  He has 20 varieties of apple and 15 varieties of pears grown bio-dynamically.

These are small hard “authentic” fruit.  Think of the original crab apples in the United States.  They had pick and then dehydrate the fruit for several weeks before grinding and pressing them.  They settle and rack.  He calls these “Sydre” or “Sidre” reaching back for earlier spellings of the word cider.

The Poire Authentique made from pears (Poire=Pear in French).  and is 4% alcohol by volume. 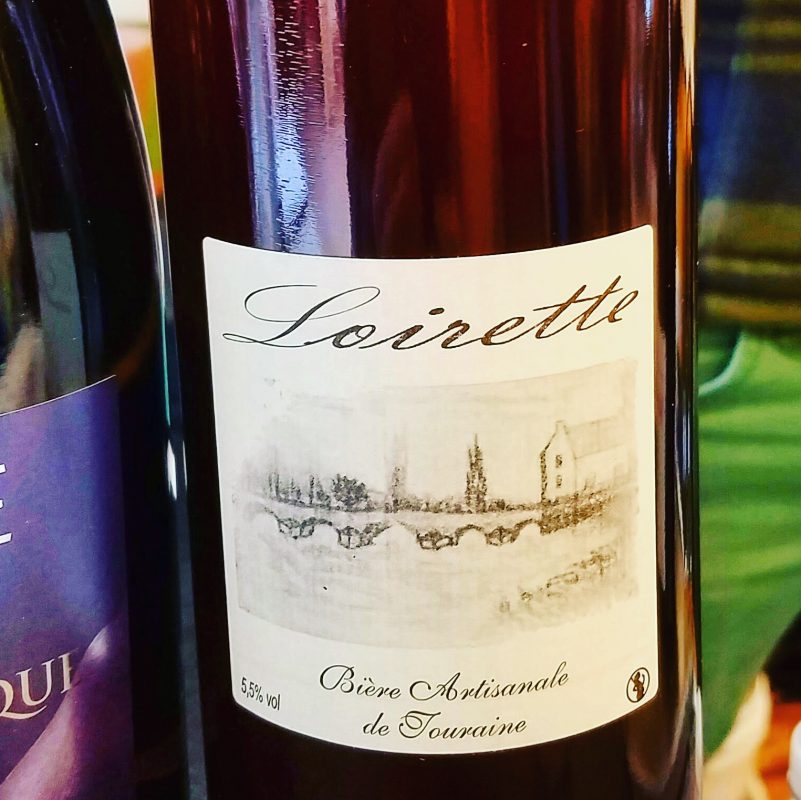 On to beer.  This Biere Artisanale de Touraine is called Loirette.  The brewery was started by the Hardouin brothers on their family property in Touraine, where they brought in their love of Belgian beers.  The Loire is plentiful in natural growers so they began by only using organic barley and grain.  They now make several wines as Brasserie de la Pigeonnelle

This Loirette is a simple farmhouse ale.

I look forward to finding these regularly now at the Market as well as others.  I have been fascinated with Natural wines, and am thrilled to have a local source to find them.

Check back here at Crushed Grape Chronicles for more on natural wines and details on the Farmers Market Wine Club!   You can also find us on Facebook, Twitter and Instagram 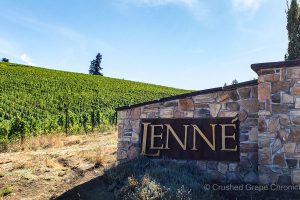 Today we visit another of the Nested AVAs in Oregon’s[...] 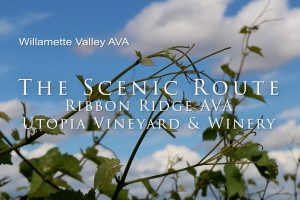 A Visit to Oregon When it comes to wine in[...] 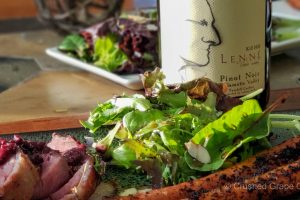 Jump to Recipe Steve Lutz didn’t start out planning to[...]