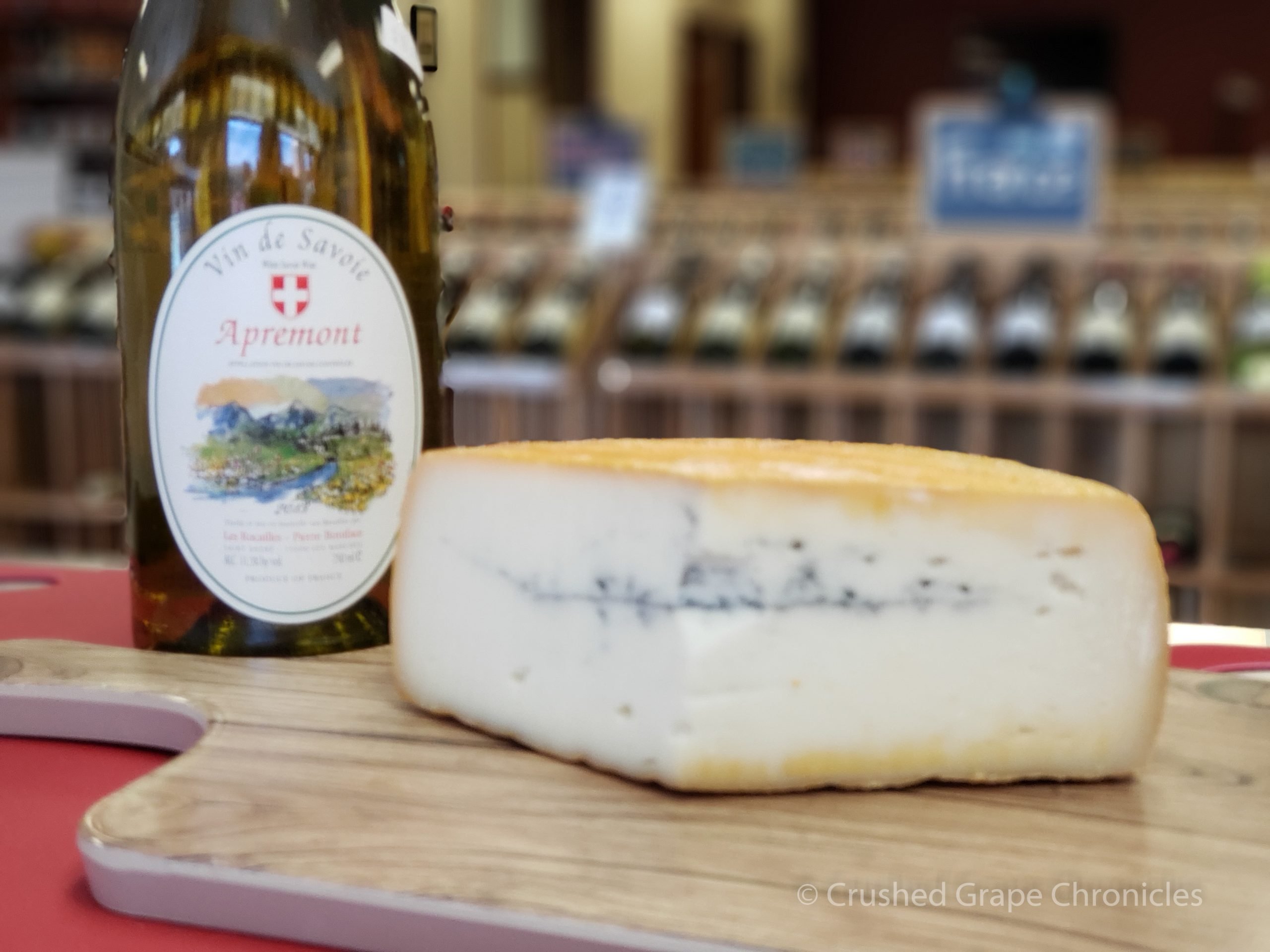 Inspired to find some “Godforsaken Grapes”

At Cam’s suggestion, I picked up Jason Wilson’s “Godforsaken Grapes” to read for this month’s French #Winophiles piece. I’ve been devouring it whenever I have a moment free.

On Saturday February 15th, the #Winophiles will gather on Twitter to talk about indigenous french grapes, “godforsaken grapes” if you will, at 11 am EST. I can’t wait to see what other grapes that I’ve never tasted that the other #Winophiles find. You will find a list of their pieces at the bottom of this post!

As a wine lover who geeks out over obscure and underappreciated wines and grape varieties, this book turned out to really be my jam. If you are into those kind of things, I suggest you pick it up too. It’s uber fascinating!

Now that I was into the book, I needed to locate a wine from one of these “Godforsaken grapes” that was from France. *reminder…Vegas can be a wine desert, and I was really determined to try to buy from a local shop. Solenne at Valley Cheese and Wine came through for me with a Jacquere from Apremont, as well as a bit of morbier cheese to pair.

Little did I know that the #winepw crew was diving into Savoie this month! I’ll link at the bottom to a place you can find all their posts if you want more information.

So now I have the wine and some cheese. Time to dig in deeper to the region, this Jacquere grape and perhaps some foods to pair with it.

First things first, the pronounciation is “sah-VWA” This is not like the Benny Goodman song (Stompin’ at the Savoy) or the London Savoy Hotel, although sometimes you see it spelled that way.

Savoie is a French Department on the eastern edge of France bordered by Italy and Switzerland. Switzerland dips into France a little here with Geneva.

This is region known for it’s beauty, with vineyards, lakes and of course the alps. These are considered the Rhône Alps, and were inhabited by a Celtic tribe who fought back the Romans, until finally being overtaken in 121 BCE. The area since then has been a part of multiple kingdoms and in the middle ages was controlled by the House of Savoy. Savoy became a permanent part of France in 1860. Most of the land is mountainous, with farmland between the mountains and the lakes. The farmland is devoted to cattle, dairy, apples, grains and vines.

My title for this piece is in honor of Apremont. This region had what is thought to be Europe’s largest landslide back in 1248 which created this environment at 1150 feet for vineyards. Soils here are chalky and they catch the morning sun. The name means “Bitter Mountain” in honor of the many lives lost in this landslide. From the Les Rocailles site

This appellation takes its freshness from the typical ground of Savoy, composed of calcareous rocks, consequence of the landslide of the mount Granier in 1248.

Apremont is one of the Cru Villages in Savoie. The AOC dates to 1973. The landslide left it barren for decades. The wine scene here began in the end of the 18th century.

Jacquère, the wine grape, is thought to be of french origin. This white wine grape variety, like the others in this region does not reach as high alcohol levels as other varieties. Hence, the 11.5% abv on the bottle I have. It is one of 10 grape varieties allowed in AOC Vin de Savoie and must make up 80% of the wine. It is the most widely planted grape in the region accounting for 50% of the plantings.

Wines from Jacquère can are dry and can range from floral and fruity (think peach, pear and maybe grapefruit) to mineral. These wines are typically meant to drink early.

There is a beautiful piece in the Decanter on this grape and region.

The biggest producer in Savoie, Pierre Boniface’s Apremont is their signature wine, making up 70% of production. Pierre took over the business from his father, starting with just 20 acres of vineyard. Sadly, his children did not want to go into the wine business. Guillame Durand and Alban Thouroude bought the business from him. They are from Savoie and were college friends. You can read more on their story below in an article in France Today, as well as some information on their Les Rocailles vineyard.

What to pair with an alpine wine? The region is huge for cheese, and potatoes are in plentiful supply as are cured meats, fresh water fish, mushrooms, apples and fruits. This is a place where you live out of the cupboards, while the ground is snow covered. So we dipped into recipes from the region that were variations on those winter ingredients.

Of course raclette was the first pairing that came to mind, but as Solenne at Valley Cheese and Wine was out of raclette from Savoie at the time, I picked up a beautiful morbier from her. She suggested I try it plain as well as melted, as it really changes the flavors in the cheese. I picked up some raclette from the Murray’s cheese counter at the grocery store and then started digging into typical Savoie dishes.

This alpine dish is simple, boiled potatoes topped with the melted cheese, a side of cured meats and gherkins. You can buy a raclette machine, which has trays over candles to warm the cheese.

Since I didn’t have one of those, I deferred to the method we had used for our raclette & wavy potato chip pairing we did a Christmas or so ago with that fantastic wine from Fossil & Fawn, that I believe Jim and Jenny called a “Gewürvignintocliniger” . Set the oven to broil, oil a cast iron skillet and put in the slices of cheese. When the slices are melted, use a spatula to slide them out and over the potatoes.

I love tartiflette, discovering it a little over a year ago when planning a holiday french wine celebration. My dear friend Arnaud said it was one of his favorite french dishes. So, tartiflette was added to the menu and was a hit.

This time I riffed on a recipe, substituted muenster cheese and made two individual tartiflettes. Here’s how I did my quick version…

Saute some chopped prosciutto and onions, add sliced potatoes and cook for about 30 minutes, spoon some into each dish, topped with sliced cheese. Add another layer of both and then pour in some heavy cream. Bake at 425 for 15 to 20 minutes.

I came across a reference to Le Farçon, a Sunday dish that they make in Savoie. Le Farçon is meant to cook in a special pan (think a straight sided, angel food cake pan) in a bain de marie for 4 hours while the family is at Sunday mass. It is a potato cake with dried fruits and apples wrapped in bacon. Quite honestly it looked like something my friend Will would make for a football watching day!

Well, without quite that much time at my disposal, I found a video with a version of this dish that was a bit simpler. Every family in Savoie has there own variation on this dish. So, I watched the video (which was all in French), caught a couple of words here and there and then from the visuals, concocted my own recipe. Here is the short version:

Peel, cut, boil and mash 4 red potatoes (it’s what I had, and I riced them with Grandma’s ricer). Saute some chopped prosciutto and onions in a pan. Saute 2 sliced apples in butter. Mix it all together, add an egg and a handful of dried currants and cranberries, pour into a buttered glass loaf pan, top with a couple pats of butter and bake at 345 for about an hour. Serve sliced. Incidentally, you will find Le Farçon is even better the next day when you can take a slice and fry it in butter and serve with a fresh green salad.

Now I needed dessert. I found a reference to rissoles, an apple filled pastry that is often called r’zoles. With puff pastry in the freezer, this seemed the way to go.

This one is pretty simple. Defrost the pastry, cut into rectangles, make an apple compote (mine had orange juice, sugar and honey). Spoon the mixture in the center of each rectangle of pastry, fold over, seal, top with an egg yolk wash and bake at 425 for 15 minutes. Voila!

This wine on it’s own was dry with an overwhelming nose of bruised tart apple. By itself…not my favorite wine. Perhaps, it is a bit of an acquired taste. Or maybe this is a result of it’s age. With the food however…it was genius! It paired beautifully with the raclette, with the tartiflette with the Le Farçon and with the rissoles! As a food and wine pairing I will rhapsodize endlessly on this. This is by far one the best overall pairings I have encountered. Truly this is a food wine, destined for the local fare.

The French #Winophiles and their “Godforsaken Grapes”

What other “Godforsaken Grapes did the rest of the #Winophiles come up with! Read on!

If you are really interested in Savoie, Jill Barth from L’Occasion led the Wine Pairing Weekend (#Winepw) group on a discussion of wines from this region. Here is a link to Jill’s piece which when you get to the bottom will provide you with another 15 articles on wines of Savoie!

Meanwhile…I’m off to find some more “Godforsaken Grapes”.

Remember that South African rosé I opened the oth

The day was spent in the kitchen! Ice cream, cook

Are you familiar with the Roussillon wine region?