A simple dinner inspired by a simple Vinho Verde from Portugal. 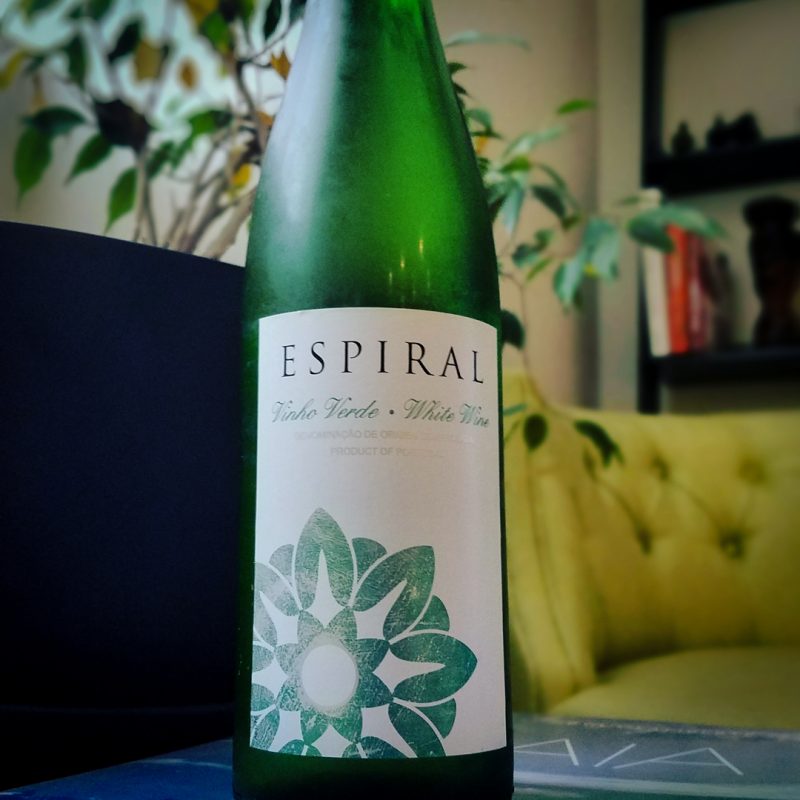 I love Vinho Verde.  I don’t typically drink soft drinks, soda, pop, coke…what ever you might refer to it as in your neck of the woods, but bubbles in my wine…well, I’m a sucker for that.  Vinho Verde, takes me back to the fresca of my youth.  I didn’t like it at the time, but now, it’s a flavor I crave in the heat of summer and Vinho Verde gets it for me.  It’s not typically an expensive wine, this one was under $5 at Trader Joes.  The bubbles?…yeah, not naturally occuring, but I’ll live with that.

At some point a Vinho Verde producer had a little natural effervescence sneak into his wine and people loved it so much that most producers adopted the practice of adding it.

While I was looking for something cool, I also needed something authentic and good for my soul.  Michael had been working and I wanted a nice curl up dinner to fill him up without being too fancy, and I wanted a good traditional pairing for my Vinho Verde. I came across a recipe for Arroz de Tamboril, which is a Portuguese dish “rice with monkfish”.  Sadly the butcher told me they had no monkfish, but…they had some cod loins.  So I adapted.  The cod loins would be meaty and delicious and the fact that they were frozen, only helped me in cutting them into the perfect bites for in the dish.

The French have risotto, the Spanish paella and the Portuguese have arroz.  These are those comforting creamy rice dishes that are meant to be eaten (IMHO) out of a bowl with a spoon, and they are great for date night (big bowl, two spoons).  You need a rice with starch here to get that creaminess, so don’t look for long grain.  The long grain rice is meant to keep from getting sticky and sticky is what you want here.  I found a bag of arborio rice that worked perfectly, but you can use a medium or short grained rice. 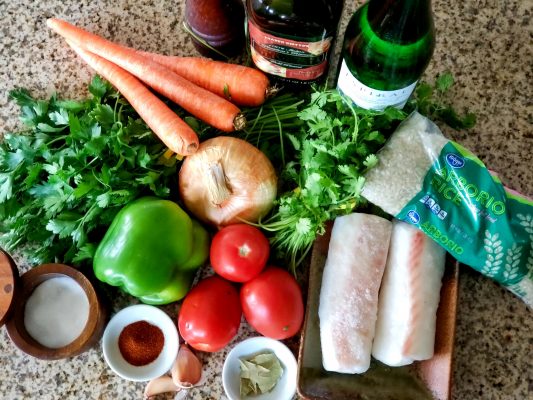 Ingredients for my Arroz with Cod loins

As I mentioned, I riffed on the recipe, so here is my version

You will notice the bay leaf in my ingredient shot.  I actually bailed on using that.  It was the last I had and I wasn’t feelin’ it.

So here’s what I did.

I cut the partially frozen cod loin into good size chunks.  Something you wouldn’t mind spooning out of your bowl to eat.  Then tossed it with olive oil, salt, pepper and sweet paprika.  Then set this aside to marinate while I worked on everything else.

Now time to make the broth.  I finely chopped 1/2 of the onion, 2 cloves of garlic, parsley and carrot.  They get braised until they are golden.  Ideally you would throw in fish bones here, but I didn’t have any, so I moved on to adding some water.  500 ml is about 2 cups.  Bring it to a boil, then turn it down to simmer for about 10 minutes, then set aside off the heat.

Chop the rest of the onion the last of the garlic and the green pepper.  The tomatoes need to be peeled and diced, so here’s the trick.  Boil a little water, and toss each in for a couple minutes.  I actually cheated and filled my 2 cup measuring cup with hot tap water and tossed them in one at a time.  After a couple minutes or so in the hot water, make an “X” through the skin on the bottom and peel the skin off.  Then you can quarter them and clean out the seeds and chop them.

Sweat the onions, garlic and green pepper over a low heat with olive oil (3 to 4 tbs, so more than you think).  You want to get most of the moisture out.  Then turn the heat up and braise them a bit.  Now you can toss in your rice and stir it around to coat it in the oil.  Stir it around for a couple minutes then add the wine and cook until it has completely evaporated.

Now you can strain the broth (I saved the veggies to add to other dishes).  Measure out 4 cups of broth adding water if needed.  The idea is twice as much broth as rice and you added 2 cups of rice.  Now you can season with salt, pepper, paprika and even cayenne if you want it spicier.  Get this to a boil and then add the tomatoes and fish, cover and cook 10 minutes.  Add the cilantro and take it off the heat.  Leave it covered for5 to 10 minutes DON’T TOUCH IT!

Now toss it in a bowl, curl up and enjoy! 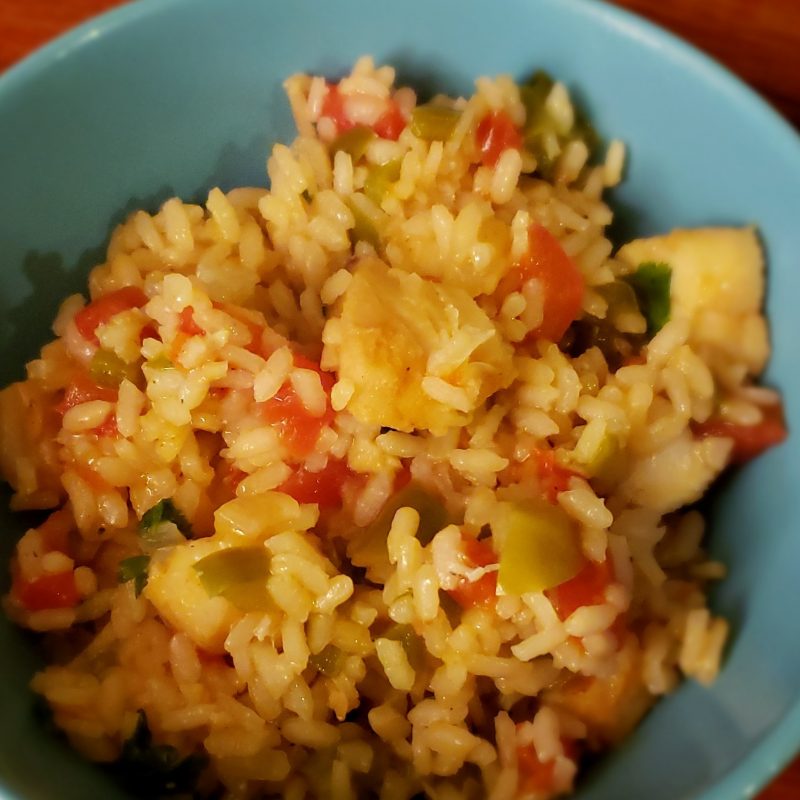 I had picked up a cheese to pair with this.  Goat cheese is a definite go to and in addition I picked up a truffled goats milk cheese in a bloomy rind.  Some strawberries for a little sweetness and some anchovies to pair with that seaspray in the wine. 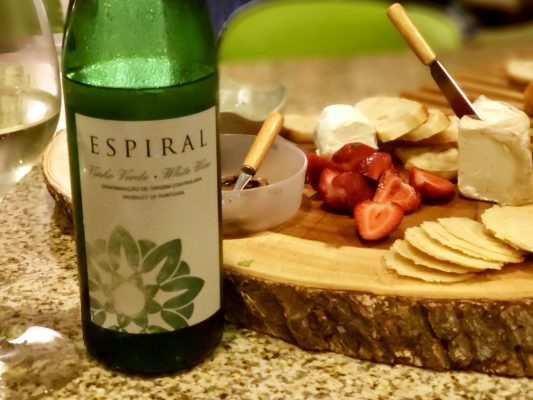 In Portugal this would be a simple dinner.  It is wholesome and delicious and made for a perfect pairing.

I mentioned that I like Vinho Verde, didn’t I?  We have written about it before, here are a couple links.

Pairings at the Keyboard! Vinho Verde.

Check back here at Crushed Grape Chronicles  for more great recipes, wine pairings and great stories on wine travel and the people behind the wines!  Or visit us on social media on Facebook, Twitter and Instagram 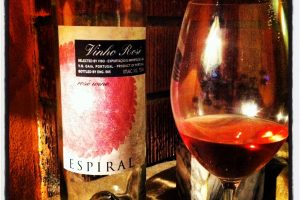 Michael was working and it was my night off.  Now[...] 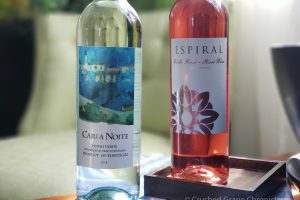 What is Vinho Verde? 5 things I didn’t know about this perfect summer wine #WinePW

I thought I knew Vinho Verde.  I was excited when[...] 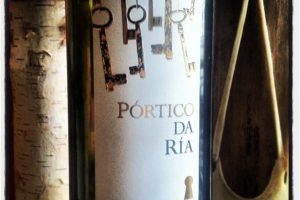 Recently I have been discovering Albarino.  I have enjoyed it[...]