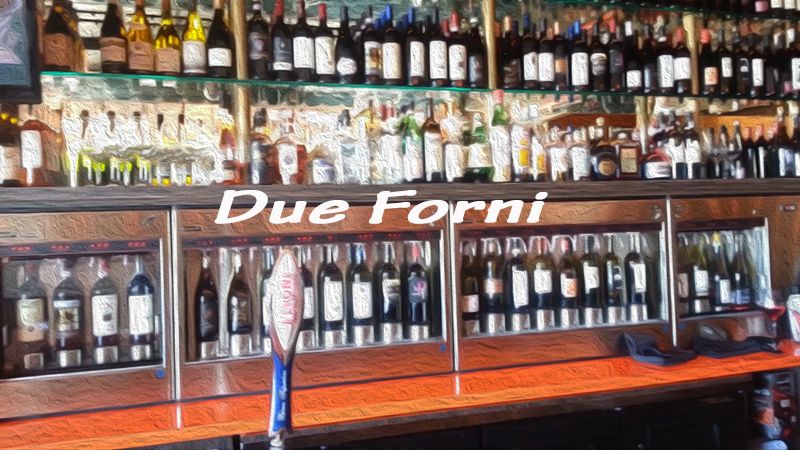 In searching for great places to enjoy wine and food in Vegas you come across plenty of list of “Best Of”. In a list of “Best Wine Bars” in Vegas I came across a name of an off strip restaurant that I had not heard of. Due Forni specializes in pizza. They have 2 special ovens to create Neapolitan and Roman style pizza. Neapolitan has a soft heavy crust, while Roman is thinner and crisper and cracker like. So you start with amazing crusts and then add amazing toppings like bufalo mozzarella, prosciutto, black truffle, roasted mushrooms or duck confit… yeah…this place is awesome.

And…more than pizza they have amazing salads, appetizers and a mozzerella bar.

And…it gets better. They have a series of Enomatic wine dispensers so you can get over 40 amazing wines by the glass.

And…the music here is upbeat Italian jazz and they have TVs playing classic “spaghetti westerns”. There is a patio, dining room and bar and great atmosphere.

So on a cool (I’d say cold but those of you on the east coast would just laugh at me) and cloudy early afternoon, we headed out to give this place a try. 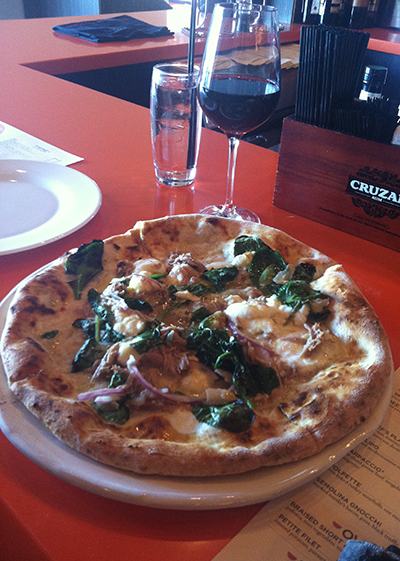 We headed straight in and sat at the bar. I find the bar at lunch the place I am going to get the most information about the wines (and I got to stare at all those bottles in the Enomatic machines. Then we started the process of staring at the menu. We settled on the Duck Confit pizza in a Neapolitan style. This pizza is topped with oven roasted duck, bufala mozzarella, fresh spinach, red onions and an over easy baked egg. Then we turned to Annie at the bar for advice on pairing. She suggested the Zenato Valpolicella Superiore 2009 and the Cavalchina 2009 Bardolina Chiaretto Rose. Both of these wines come from the Veneto region of Italy, the home of Amarone. It was really interesting to try the Valpolicella a deep red wine and the rose with the duck. The Valpolicella had a lighter mouthfeel than I had expected, but the played nicely with the duck adding a richness. The Rose was really lovely with it, the acid cutting through the fat of the duck and the egg. So…both were great pairings! We finished all of that off and then went back to the menu for more. 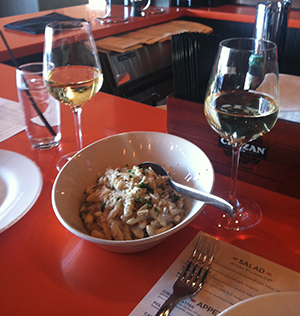 We chose to split the Semolina Gnocchi appetizer with smoked nueske’s bacon, peas and black truffle creme. Michael looked for a Riesling on the menu (his favorite pairing) and chose the SA Prum Blue Slate Kabinette Riesling 2007 (he got to compare it to the SA Prum Essence he tried the other day). I opted for the Pricipessa by Banfi Gavi 2011. Again both paired nicely. The Pricipessa cut through the fat in the gnocchi without simply cleaning my palate. It mixed and added to the flavor of the gnocchi.

After that we were stuffed, but I look forward to going back and trying the Mozzarella bar and more of their amazing wines! They offer tastings on the wines at 20% of the glass price. They also have a selection of beers and list on the menu the option of buying the cooks a beer for a dollar!

Okay…now to geek out on the wines.

Valpolicella is made in the Veneto region of north-east Italy. It’s signature tart cherry aroma has caused it to be thought of as Italian Beaujolais. Typically these wines are light bodied and served at room temperature or slightly chilled and often sit at about 11% alcohol. If they are labeled Valpolicella Superiore they must be aged for at least one year in oak and reach an alcohol level of 12%.

Valpolicella is made of Corvina, Rondinella and Molinara grapes. Corvina is thought of as the best of these grapes and produces wines with more body than is typical of a Valpolicella, when the grape is grown on warmer, well-drained slopes. 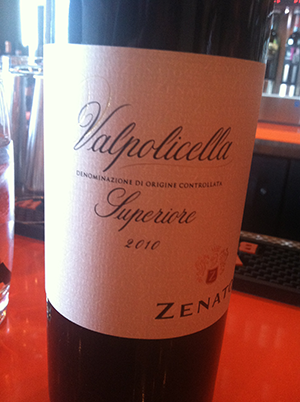 The Zenato Valpolicella Superiore 2009 is 80% Corvina, 10% Rondinella and 10% Sangiovese all grown in Sant’Ambrogio di Valpoicella on a southeast facing hill. The soil here is chalky and calcareous and the vines are cordon trained and spur-pruned. There are 5,000 vines per hectare and the yield is 10 tons per hectare. Hand picked in October the grapes are de-stemmed and macerated for 10 days in stainless steel fermenters (I warned you that I was going to geek out on the wines!). They age this in Slovinian oak for one year. While this wine is ready to drink now, you can also age it for a number of years. 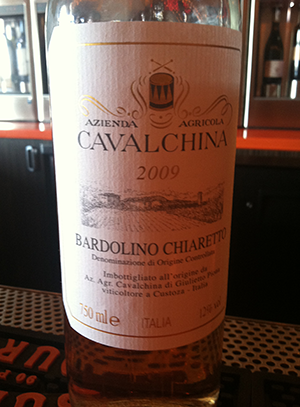 The Cavalchina 2009 Bardolina Chiaretto Rose comes from the Cavalchina district. Originally Chiaretto was the by product of the Bardolino Rosso. This was the run off after maceration with the skins. The harvest time for the Rosso was meant to keep the wine low acid, which is not ideal for roses. Now the wines are made separately, with the grapes for the Chiaretto harvested 2 weeks before the Rosso. There is a 24 hr maceration period followed by clarification and 15-18 days fermentation. They avoid malolactic fermentation and leave the wine on it’s lees until it is bottled. This wine has a lovely salmon color.

I gave you a little background on S.A. Prum with the A Cloudy afternoon at the View now Michael was getting to compare the SA Prum Blue Slate Kabinette Riesling 2007 with the SA Prum Essence. This wine is named for the blue slate soil on the very steep slopes where it is grown.

I have been a Banfi fan for a while. Several years ago I attended a wine pairing dinner where they served all Banfi wines. It was a great experience and probably kick started me into the more intense love of wine that I have now. So when Annie suggested the Principessa Gavia I was anxious to try it!

Castello Banfi has it’s winery in the Brunello region of Tuscany. The vineyard is family-owned and they have sister estates in Piedmont, Vigne Regali and Principessa Gavi. A bit of interesting history; the company is named after Teodolinda Banfi who was the first lay person ever to head the pope’s household staff. Her nephew John Mariani, Sr was born in Connecticut in 1895, his father died when he was nine and he, his mother and siblings returned to live with his mother’s sister, Teodolinda. In 1919 John Mariani, Sr. opened Castello Banfi winehouse in New York.

The Principessa Gavi is 100% Cortese. Cortese di Gavi is grown in the lower Piedmont region of Italy.

Due Forni is getting ready to open another location in Austin Texas. Austin just doesn’t know how lucky they are!