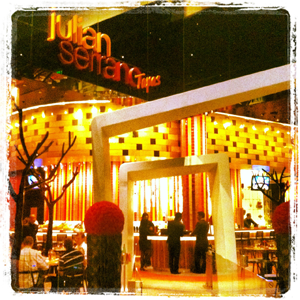 Julian Serrano at the Aria

I know very little about Spanish wines.  Michael and I concentrate on California wines (heck they are close!) then we venture across the country and sometimes dabble in French, Italian or South American wines.  But Spanish wines?  Well they just don’t often come across my radar.

Last night we were heading out to see a show and as we were going to be at the Aria I decided to look up the fine dining there and see if there was anything we could fit in (both time wise and budget wise).  Well to my happy surprise 3 of the major restaurants at the Aria offer early bird tasting menus with optional wine pairings!  We settled on Julian Serrano and headed in to enjoy some Spanish Tapas.  The tasting menu is a great deal with an appetizer, entrée and desert for $39 with optional wine pairings for $19.  Michael and I both chose the lobster gazpacho for the appetizer that was served with a Marques de Riscal Rueda 2011.

Marques de Riscal Rueda 2011is a verdejo  & viura blend both grown in the town of  Rueda in the province of Valladolid. 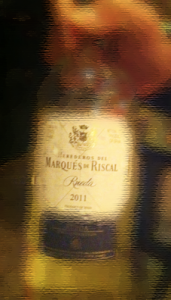 So…time to research this wine!  Marque de Riscal wine cellars and Vegas have something in common and that is the Canadian Architect Frank O. Gehry.  Gehry designed the Lou Ruvo Center for Brain Health in Las Vegas, a Cleveland Clinic Alzheimer research center.  Gehry who had never wanted to design for Vegas agreed to do the design only after Ruvo increased the research mandate to include Huntington’s disease that he had long been championing.  In Marques de Riscal they have created the City of Wine designed also by Ghery.  This design encompasses the 43-room luxury hotel and the complex as a whole is devoted to making caring and studying wine.  At the heart of the City of Wine is the cellars of Marque de Riscal dating from 1858.  The entire complex is located in the renowned Vinos de los Herederos del Marques de Riscal’s Vineyard in the medieval village of Elciego.  So much for the place…onto the grapes

Verdejo is an indigenous grape to Spain.  It is native to Rueda in the Northwest part of Spain and is now the country’s principal white grape variety.  In the past verdejo was prone to early oxidation but due to cold fermentation and night harvesting as well as the use of an inert gas blanket this has been for the most part corrected.  It is often compared to ta Sauvignon Blanc (a tart one, for my opinion) or a Pinot Gris.The blending grape viura is often known as Macabeo in Northern Spain.  This is the most popular grape in northern Spain.  They also grow this in southern France mostly Languedoc where it is typically blended with Grenache Blanc.

Now to the tasting.  For me this wine was very tart, similar to a Sauvignon Blanc.  I got lemons and grass on the nose and on the palate it did have a slight oily viscosity, which took the extra bite out of the acidity.  This paired with the lobster gazpacho.  The gazpacho came with what looked to be a bon bon in the spoon with the lobster claw meat and tiny-diced peppers, cucumbers and micro greens beautifully arranged in the bottom of the bowl.  Our server said the chef suggested eating the bon bon in one bite as it was filled with gazpacho also.  He then poured about one third of the individual carafe of smooth pureed tomato gazpacho over the bowl.  The bon bon (which I think was an infused oil or fat frozen in a ball around the gazpacho) burst in my mouth and was a joyous way to start our meal.  The gazpacho was smooth with the bits of pepper and perfectly cook lobster claw meat.  The carafe allowed me to refill my bowl twice more, making the experience continue.  I found the gazpacho delicious with layered flavors from added infused oils.  The wine was a bit to acidic for me as an accompaniment, but…I am a bit of a wuss with tart wines.

Next on the menu was the entrée.  Michael chose the fish of the day, which was a salmon on a bed of spinach, and I chose the crispy chicken breast roulade with sautéed potatoes pork chorizo and roasted red peppers.  The wine with the main course was 2005 Bodegas Castano Hecula Monastrell Yecla  (yeah could you say that again in English?)  Okay, Mouvedre.  That’s how you say it in French at least.  Monastrell is it’s Spanish version.  This grape is thought to originate in Spain although now it is grown all over.   The wine region here is Yecla, which is a DO within the Murcia province of Spain.  They are surrounded by Almansa to the north, Alicante on the east and the Jumilla DO in the south and west.  Monastrell is traditionally enjoyed young but barrel aged styles are increasing as the importance of quality increases.  This wine received a 90 from Tanzer.  The wine is 100% Monastrell from the valley.  It is fermented in steel tanks with a soft maceration of skins.  It is aged in French and American Barrels for 3 to 6 months after malolactic fermentation.  This is a wine that should age beautifully (thank goodness as this was a 2005!).  It is inky violet with lots of deep dark fruit.  The mouth feel was lighter (felt more like a Pinot in my mouth) Good tannins with a little smoked meat.  We both enjoyed this wine very much on its own. 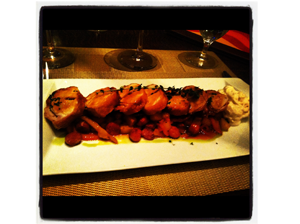 Now with the crispy chicken…first this chicken was the most moist breast meat I have ever had.  It was rich and succulent and it paired gloriously with the Monastrell.  The acid in the wine cut through the fat in the chicken and was heaven in my mouth. (Michael agreed on his forkful).  The dish itself was lovely with the heft of the sautéed potatoes the bright richness of the roasted peppers and the heat and spice of the chorizo under the chicken.  And…it was served with garlic foam.  This was heaven.  I giggled whenever I took a bite of the foam.  The foam explodes in your mouth and you are left with guilty garlic breath.  This dish was sooo good and sooo rich that I only at half and was feeling quite stuffed and concerned about my upcoming desert.

For dessert we both chose the molten chocolate cake with orange jelly and blood orange sorbet.  Okay, I mean regardless of what other heaven is on the desert menu…molten chocolate cake and blood orange sorbet?  How can you pass that up?  No…it’s not very Spanish, but it was simply (as Spanish cuisine likes to be) and delicious.  The pairing for this course was a Taylor Fladgate 10 year old tawny port. 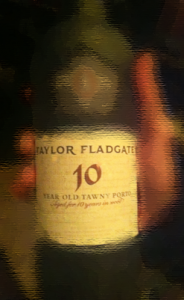 This port is a port blend red and of course while not Spanish it’s from Portugal, which is pretty close by.  To make a Red port wines multiple varieties of grapes are blended together.  What’s the secret, you say?  Tell us the blend, you say.  Well it’s not like they are trying to keep it a secret.  While everyone else was worried about varieties they were just growing grapes and making port!  There are growers in Douro that quite honestly don’t know what is growing in their vineyards.  Call it a field blend! (I am actually a big fan of field blends…maybe I am just picturing myself in a field of wild flowers?…whatever…I like them!).  Now while it says 10-year-old port…that is really just an average.  Each port is a proprietary blend of multiple vintages.  If by chance the bottle you pick up reads reserve or reserve on the label that would tell you that it spent at least 7 years in barrel before they released it.

So…this was a lovely port.  It warmed me up and that overly full feeling from the very rich chicken (which dammit I couldn’t pack up to take home since we were headed for a show.) dissipated.  When the desert arrived it was everything I hoped for. The perfect proportions, small but filling.  When you had a bite of the chocolate cake with a bit of the blood orange sorbet together it was really wonderful.  The richness of the cake with the acid and gentle tartness of the sorbet, and then a sip of the port…yeah, I left there a happy woman.  And…the restaurant is beautiful, it is bright and bold and engaging without being loud.  I especially loved the trees (yes I know…I’m a sucker for trees).  All in all a lovely experience and one I would recommend.  Next we will have to try the tasting menus at Sage and American Fish!