Unexpected Sparkling Wines from around... July 7, 2020 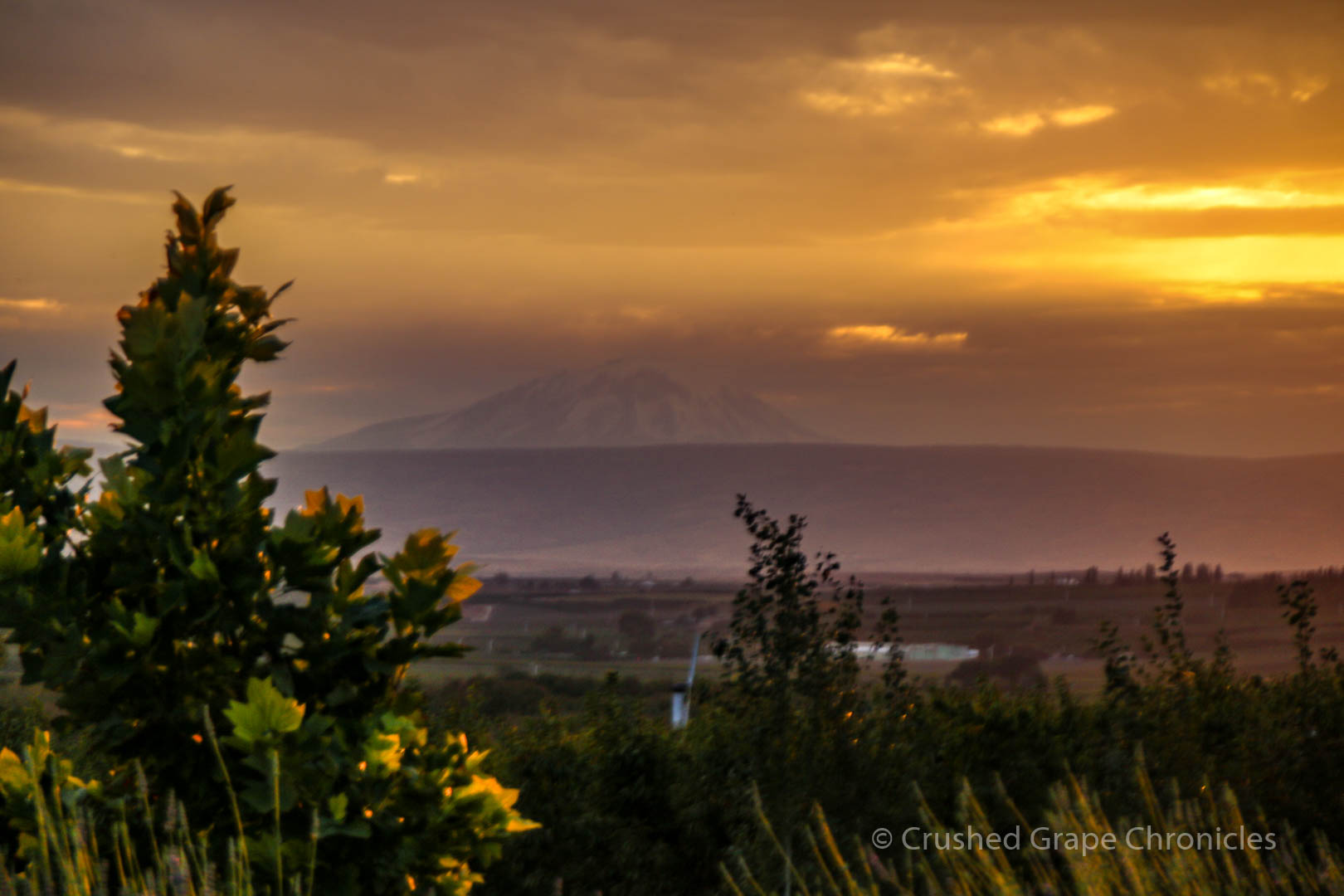 We had an opportunity this past fall to travel to Washington to explore their wine scene as we attending the Wine Bloggers Conference (which has since been renamed the Wine Media Conference) held in Walla Walla Washington.

One of the great things about the conference is that they offer Pre and Post Conference Excursions.  These are press junket style for wine writers.  Michael and I were able to join the Yakima Valley Tour put together by Wine Yakima Valley.

We flew into Portland and then on to the Pasco Tri-Cities Airport in Washington.

After arriving early, we camped out in a comfy couch at the airport and gathered ourselves before the true start to our journey.  Soon enough we were greeted by the folks from Wine Yakima Valley and guided to the vans.  They handed us a snack tray with local snacks….

Put together by Daniel’s Artisan, it included an Asiago from Ferndale WA, Pajarero Figs from Spain, Two Sisters honey sticks from Kennewick WA, and Croccantini crackers from Tukwila WA.

With sustenance in hand, we set out for Yakima.

The drive to Yakima

The drive from the airport to the Yakima Valley was pretty long!  Luckily, I was squished in the back seat with Cathie Schafer of Side Hustle Wino and Jennifer Whitcomb of Beyond the Corkscrew. Patrick, our driver, was full of great information on the area, but we couldn’t hear a thing in the way back, so we kept ourselves entertained, giggling quite a bit. Every now and then Thaddeus of the Minority Wine Report would relay what the driver was saying.  We watched the valley roll by, driving through the greater part of the valley, through Red Mountain, Prosser and Zillah and at last arrived at Owen Roe Winery on the far West end of the Yakima Valley.

Owen Roe Winery sits on the edge of the Yakima Valley AVA in Union Gap. The winery produces wines from within the Yakima Valley as well as from the a variety of vineyards and AVAs in the Willamette Valley. The winery itself is built on the Union Gap Estate Vineyard, but they also source fruit from other Yakima Valley vineyards, including; Dubrul, Elerding, Olsen, Outlook and Red Willow.

The winery is co-owned by David & Angelica O’Reilly and Ben & Julie Wolff. We were lucky enough to be here while the winery itself was busy and filled with fermentation bins. We were lucky as well to have co-Owner David O’Reilly there to greet us.

Wine was flowing…so much wine from so many wineries. I admit to being a bit overwhelmed. Trying to note each wine was not possible.  I tried to memorize labels to come back to later for more information.  Bottom line…I need another visit to this region to dig in. But let me fill you in on a few of the wines and people we were introduced to!

Women in Wine in Yakima Valley

While we were waiting, David O’Reilly with Owen Roe, invited a couple of us back into the winery. This is a working winery and they were busy with harvest.  But that tale is for another day. Soon, I promise, complete with video of our tour and filled with great information from David, who is a brilliant guide (and he’s great on camera!)

After the 2nd van arrived and people had wine in hand, Barbara Glover of Wine Yakima Valley welcomed us to Flavor Camp. Today, we would learn about the flavors of the Yakima Valley.  This is more than wine country, this is the apple growing capital of the country and the premier place for growing hops.  So today would be insights into all the flavors in these libations!

Shout out to Barbara Glover with Wine Yakima Valley for organizing a great event and reorganizing to make it even better on the fly!

We started with apples with Marcus Robert, General Manager of Tieton Cider Works, who spoke with us about the apples they grow for cider.

Grapes for Wine with Owen Roe

Then on to wine with David O’Reilly and a tour of the vineyard Owen Roe Vineyard here in Union Gap. We looked at the soils and elevation of the vineyard, feet in the dusty loess soils.

Hops for Beer with Hopsteiner

And finally on to hops, with Nicholi Pitra who is a Hops Geneticist for Hopsteiner. It was fascinating to learn about hops and get to smell the difference between the varieties.

(You will get in depth videos of each of these coming up soon!)

Dinner with a Sunset View of the Yakima Valley

The evening culminated with a sunset dinner, bottles everywhere along the table and winemakers walking about serving their wines and speaking with people. In addition there was amazing food from Crafted Yakima fresh from local farms. (Yes more flavors of the Yakima Valley)

I ended my evening with a great conversation with Co Dinn who lead our group the following morning. I promise more on that soon as we journeyed on to Elephant Mountain Vineyard.

Enjoy a little synopsis of this day and you can look forward to some in depth pieces coming up on the Flavor Camp, our winery tour with David O’Reilly and Day 2 with our trip to Elephant Mountain Vineyard.

Want more information on the Yakima Valley and it’s wines

If you want more information on the Yakima Valley and it’s wines, Wine Yakima Valley is the place to find it. You can find out about events, winery and tasting rooms, restaurants, lodging and they have a great blog with some terrific photos that will have you longing to visit the area.