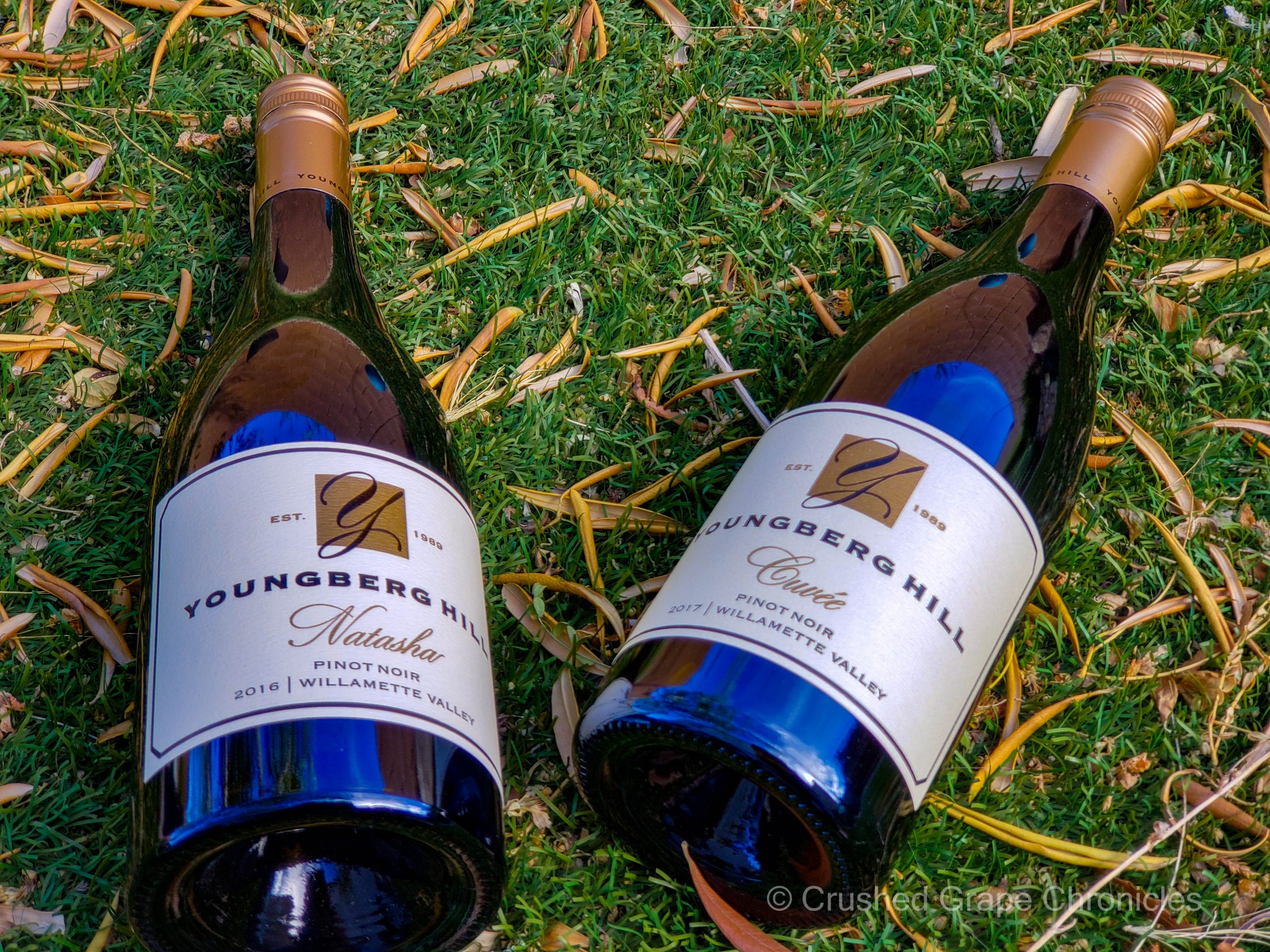 Years ago, Michael and I ventured to Oregon on our first trip to explore the Willamette Valley. An old friend of mine, Adam, met us and made sure we visited Youngberg Hill, where he and his wife had recently been married.

I remember, having a joyful conversation with Adam in the backseat and me in the passenger’s seat.  We had already stopped at one winery and Michael was being the designated driver.  We were chattering away on the small roads leading to the winery.  These were the days before in-car navigation systems and Adam was directing us.  Of course, he and I kept getting distracted in conversation, and to Michael’s dismay, we had to turn around and backtrack, more than once.

We made our way to Youngberg Hill and Adam was greeted warmly as we arrived.  He has a way of making friends wherever he goes.  We tasted wine and toured the property, getting the play by play from Adam on the wedding, as he blissfully (and adorably) reminisced.

Recently we received samples from Youngberg Hill.  The memories took me back to this earlier visit and I looked forward to opening the wines.

*We received these wines as samples, but all opinions are our own.*

The History of Youngberg Hill

This property had been a family farm since the 1850s. Back then a Swedish immigrant named Youngberg established a 1600-acre homestead here.  The family lived off this land for 130 years.

In 1987 the family sold 700 acres.  The new owner planted vines in 1989 overseen by Ken Wright.  These vines were sourced for wines at Panther Creek, Wright’s winery at the time.

The Bailey family arrived at the property in 2003 and began the process of making this a sustainable vineyard as well as an event venue, the views here are stunning.

The approach to growing grapes was informed by Wayne Bailey’s youth in Iowa on a farm.  He takes his stewardship of the land seriously.  His career path, from mechanical engineering to supply chain management dropped him into the beverage field.  That led to a bit of time in Burgundy which led him to want to grow Pinot Noir.

Bailey’s farming here, at Youngberg Hill, began with sustainable methods and a non-interventionist approach.  He moved to organic and then beyond. The goal wasn’t certifications, the goal was the best way to take care of the land.  They employ various organic and biodynamic practices to suit the site. They farm by the farmers’ almanac via the phases of the moon, as farmers have done for centuries. This practice is often considered “biodynamic”, but it has been used long before biodynamics was a thing.  He’s pragmatic in his approach to farming.

“It’s like raising children,” he says. “You can’t make a rocket scientist out of a child who’s born to be a musician.”

The Youngberg Hill estate is 50 acres with 20 acres planted to vine.  This is in the Western portion of the Willamette Valley which receives significant maritime influences sitting just 25 miles from the Pacific as the crow flies.  While the maritime climate doesn’t come straight through, it sweeps it’s way up through the Van Duzer Corridor south of them.  They don’t get as much rain here as the rest of the valley and the temperatures tend to be cooler overall.  The original 11 acres are own-rooted.

We tasted two of the Youngberg Hill Pinot Noirs, one a blend of non-estate and estate fruit and one from the very specific Natasha Block. 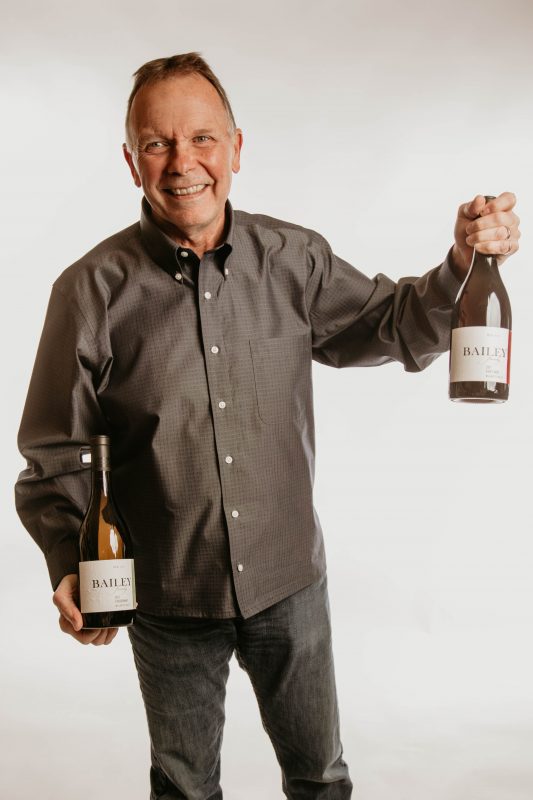 This 2017 blend comes from fruit from the Bailey Block on the Youngberg Hill estate, as well as some fruit from Yamhill Valley Vineyards.

The Bailey block was planted in 2008.  This is 3 acres of 777 clones.   Soils here are well-drained mixed Steiwer/shale and the vineyard sits at 660-700 feet in elevation.

The rest of the fruit is from Yamhill Valley Vineyards and from Dijon 667 & 115 clones. This is a 150-acre estate.  They are the oldest winery in the McMinnville AVA.  We met their winemaker Ariel Eberle a few years ago pouring her own label “A Cheerful Note”. 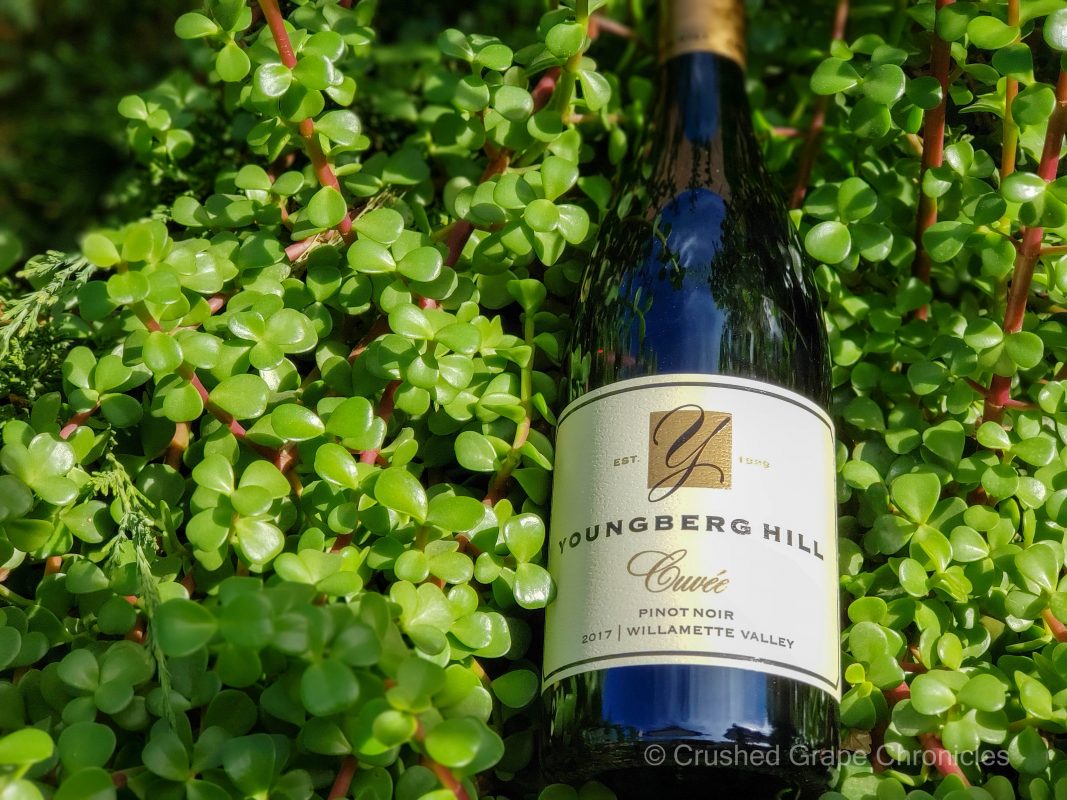 The nose was full of red fruit with a waft of dustiness then brambles and spice.  Baked strawberry came to mind.  It was bright in my mouth with med/high acid and light drifty tannins that evaporate.  A medium finish that brought up bits of cola. 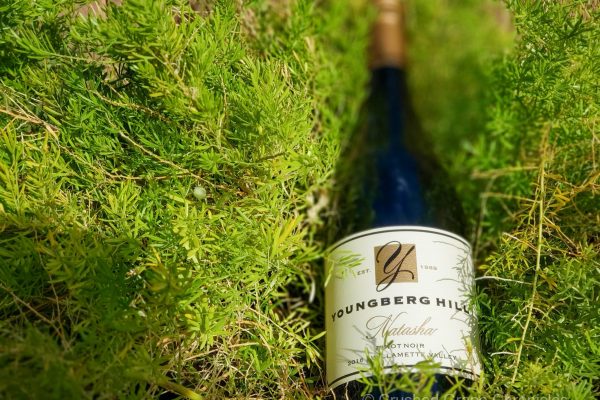 This wine had a very integrated nose.  It was heavier than the Cuvée with more brambles and bramble fruit.  It was lively in my mouth with tartness, like tart blackberry and good acid.  Notes of red currant, with bits of smoky vanilla, popped up as I paired it. The finish was lengthy and mouth and gum warming.

This wine is a bit more brooding and earthier than the Cuvée.

The Natasha Block is a Bailey Estate Block, planted in 1989 and named after Wayne’s eldest daughter.  Facing southeast this 6.6-acre block gets great sunlight and sits at 600 feet. The soil here is the Willakenzie series of Marine sedimentary and volcanic rock.

Pairings for these Youngberg Hill Pinots

Salmon & Pinot are so traditional, we stepped just a bit outside the box.  The key to red wine with fish is choosing a fatty fish and so we chose rainbow trout.  For my vegetable, I went earthier choosing a root vegetable gratin, in a rainbow of colors, with red beet, sweet potato, golden beet, and parsnip.

How did the pairings go?

The trout with its distinctive flavor and fat stood up to both of the wines, even the brooding Natasha.  The gratin really worked well, much credit should be given to the Gruyere topper for pulling the pairing together.  With the blend of 4 vegetables, I found I preferred the parsnips with the Cuvée and the beets with the Natasha.  Overall, a very satisfying pairing. 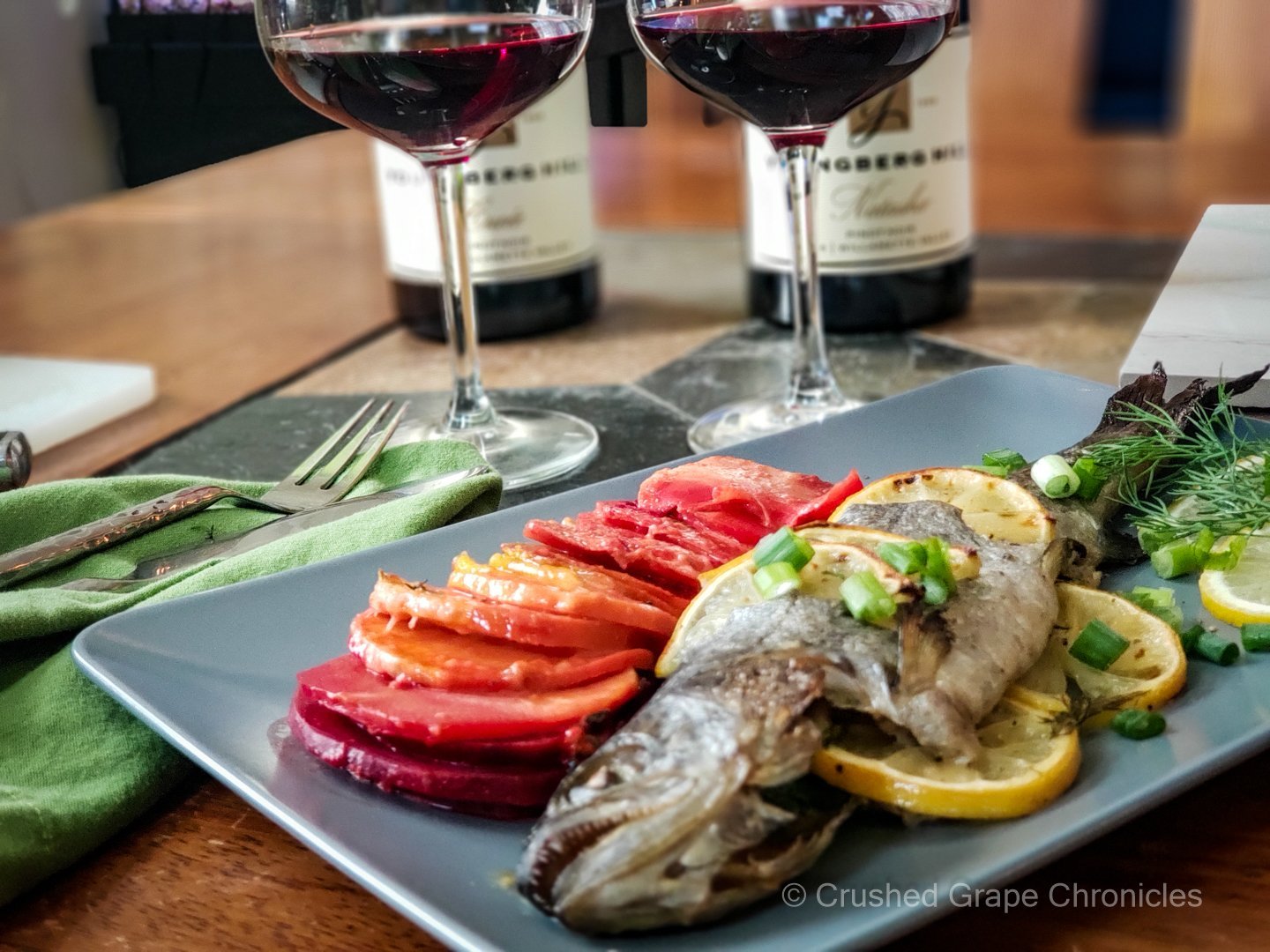 We did not finish both bottles in one sitting, so we had some left over to pair with lunch.  Youngberg Hill mentions that the Cuvee will pair with everything!

“You can even pair this with PB & J or spiced tacos.”

Challenge accepted!  We paired with PB & J to our delight and it was wonderful, the acid in the wine cutting through the fat in the Peanut Butter and melding beautifully with the fruit in the grape jelly!  Do It!  Preferably in your jammies on the couch with a good book or a great movie. This is genius for a nesting day!

How to find Youngberg Hill?

The Willamette Valley is a beautiful place to visit and has so much wonderful wine!

For more information on this region visit