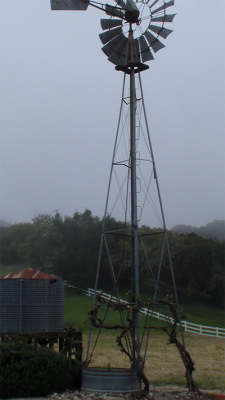 This weekend Zaca Mesa Winery will celebrate it’s 40th birthday.  This winery has quite a bit of history.  The property was purchased by a group of friends in 1972 and the vineyard was planted in 1973 and they have been sustainably growing grapes in Santa Barbara ever since.  The winery itself was built in 1978 and expanded in 1981.  By the early 90’s they had determined that Rhone Varieties grew best on the property.  They were the first Central Coast winery to appear in Wine Spectator’s Top 10 back in 1995.  They are down to the last of their original owners and have been family owned for about 25 years.

Their first winemaker was Ken Brown who has since gone on to start the very successful Byron in Santa Maria.  The rest of the list of previous winemakers continues to look like a who’s who of Santa Barbara & Paso winemakers including: Jim Clendenen of Au Bon Climat, Bob Lindquist of Qupe, Daniel Gehrs of Daniel Gehrs Wines, Clay Brock of Wild Horse, Chuck Carlson of Curtis and Benjamin Silver of Silver Wines.

Their current winemaker is Eric Mohseni.  He started his career in wine retail then worked at Edna Valley Vineyards in 1997.  It was there that he got hooked on winemaking.  He started at Zaca Mesa in 2001 as the enologist worked up to Assistant Winemaker, then Associate Winemaker and finally took the reins in July of 2008.

All the wines here are estate bottled and grown.  They don’t buy or sell grapes.  They have about 750 acres of which 244 are planted with grapes.  20 acres are newly planted with Syrah.  They sit about 30 miles from the Pacific Ocean in the Northern portion of the Santa Ynez AVA.  Soils here are mostly Chamise loam over gravelly beds of silk and clay so the soil is well drained.  Many of their vineyards are up on a high mesa at 1500 feet.  This gives them lower high and higher low temperatures.  The more consistent temps allow for slow consistent ripening.  The height also causes higher UV radiation, which makes the grapes smaller, and thicker-skinned giving them increased color and phenolic compounds, which can provide more flavor to the wine. 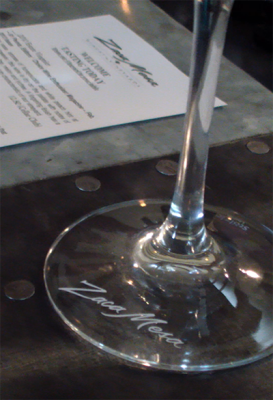 As to “sustainable” there is a “Code of Sustainable Winegrowing” developed by the California Wine Institute and the California Association of Winegrape Growers.  It spells out “practices that are sensitive to the environment, responsive to the needs and interests of society-at-large, and economically feasible to implement and maintain.”  Zaca Mesa is sustainable using organic products, conserving energy and working efficiently to reduce waste.  They farm only one-third of the acreage leaving open space for wildlife and preserving ground water.

Zaca Mesa was the third stop in a little trilogy we were doing in Santa Barbara, the day before we had tasted at both Au Bon Climat and Qupe.  We rolled in early on a Friday morning and watched the coastal fog roll through the valley coming in from the North.  The property is beautiful with huge trees greeting you as you walk from the parking area to the tasting room.

It was the beginning of a busy weekend for them as they had their wine club pickup party happening the next day.  We rolled up and were the first guests in the tasting room.

Now onto the tasting!

After our tasting we wandered up on the hill to where they have a small picnic area overlooking the winery and vineyards.  I could have strolled the grounds all day and maybe gotten Michael to play me a game of chess on the oversized chess board outside the tasting room, but….we had to press on to our next tasting! (Coming up next…Talley!) 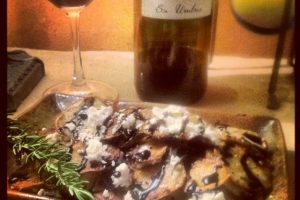 Secret Santa’s who give wine are the Best! Here’s to Ex Umbris Syrah!

Potatoes and Syrah!  Yeah, I bet you are thinking that[...] 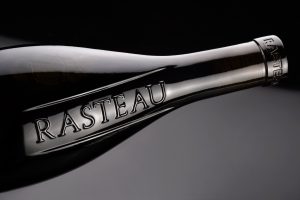 Fall, Thanksgiving and the flavors of Rasteau #Winophiles

Rasteau. Perhaps it’s a name you are not familiar with.[...] 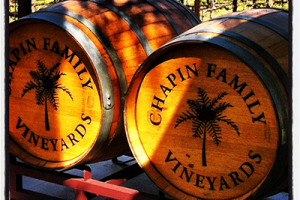 Chapin Family Vineyards – Incredible service with a smile and a story

After a long day of wine writing, editing and cont

That's a wrap on this glorious Friday evening. He

We #sampled 2 wines from Herdade do Esporão in Al

We recieved 2 sample wines from Esporão. The Mon

Day 2 in the books! The Wine Writer's Symposium,

A Tablas Creek Vermentino with Jeff's recipe for S

It's #nationalwhitewineday and it's #waugust so we